Summit for Democracy: 9 commitments assumed by Brazil that require a change in position by Bolsonaro 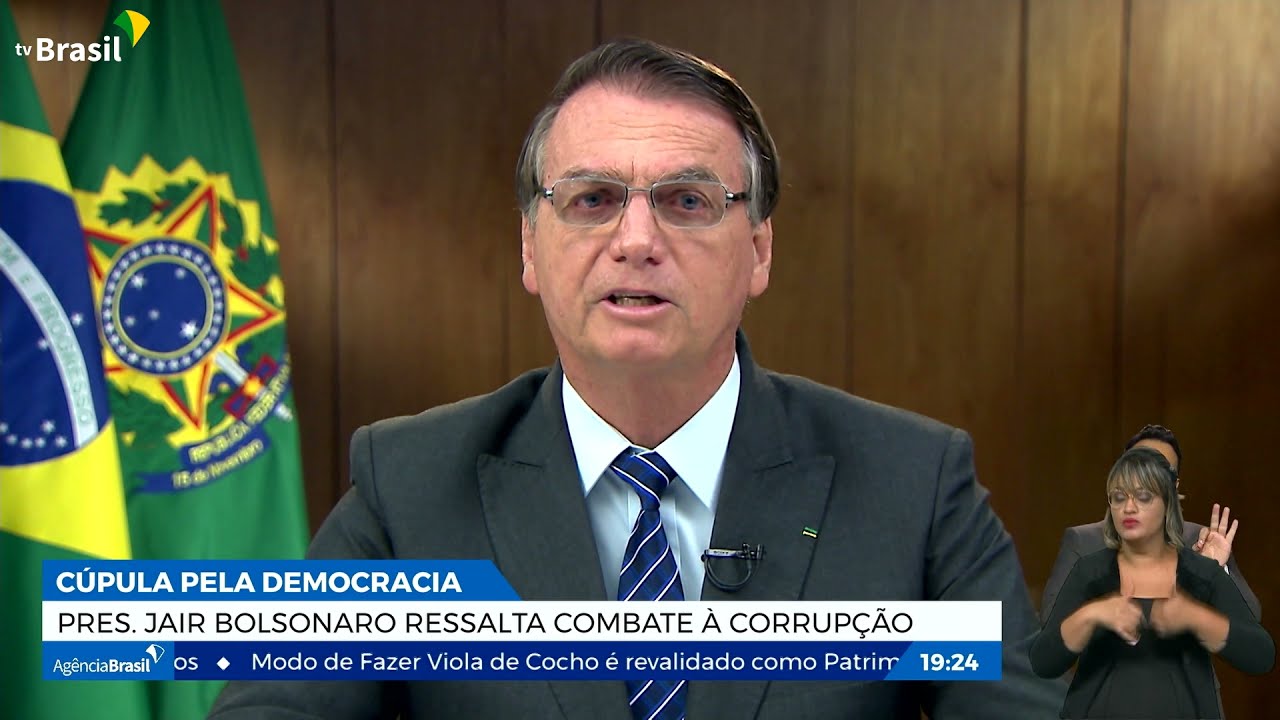 The International Summit for Democracy, staged virtually at the start of this month, was attended by members of civil society, journalists, businesspeople and more than a hundred world leaders, including President Jair Bolsonaro, who in his speech claimed to defend and promote human rights and democracy in Brazil.

The position adopted by Bolsonaro at the event organized by the president of the United States, Joe Biden, was presented in the document “Voluntary Commitments” of the Brazilian government, which contains the joint commitments assumed by the countries after the Summit.

Comprising both domestic and international matters, the Brazilian document consists of 18 commitments in the areas of Strengthening Democracy, Advancing Human Rights and Fighting Corruption. However, it mentions actions and assumes commitments that are far removed from what has been observed during Bolsonaro’s term of office.

“The document has two major problems: the first is a misrepresentation of the concepts that support human rights. For example, the federal government includes in its commitments the work of the Ministry of Women, Family and Human Rights, headed up by Damares Alves, which it considers an important body for the realization of rights. But, in practice, the ministry has acted firmly against sexual and reproductive rights and weakened mechanisms to combat torture, among other things,” said Gustavo Huppes, international advocacy advisor at Conectas. “The second major problem is the defense of democracy by a notoriously authoritarian government, whose actions and signals show how democracy is under attack.”

Huppes went on to say that the Brazilian government’s authoritarian position is already well known to the international community. “To comply with the commitments assumed at the summit, Bolsonaro will have to make a complete u-turn in his policy actions this year, which is not likely to occur based on his administration’s record.”

Conectas comments on 9 commitments assumed by Brazil at the Summit for Democracy. See below:

Reality: President Bolsonaro and his allies this year stepped up a campaign against electronic voting machines, alleging the possibility of fraud and raising doubts about the integrity of the Brazilian electoral system. In an internet broadcast, the president made several false and misrepresented claims to “prove” the possibilities for fraud at Brazilian ballot boxes. Although he was not successful, he caused instability and encouraged his supporters once again to attack other authorities, including the judges serving on the Superior Electoral Court, who are responsible for organizing and supervising the elections.

Commitment: Engage in initiatives, on the regional and international levels, to globally promote respect for the rule of law and democratic principles

Reality: From attacks on the press to radical speeches, the anti-democratic offensives led by Jair Bolsonaro occur almost daily and reached their peak when he called on his supporters to stage rallies on September 7, Brazil’s Independence Day, with threatening messages against the Supreme Court. Social participation, essential to the rule of law, has also been targeted by the government from the outset, in 2019. Decrees, provisional measures, ministerial orders and bidding processes have attempted to block, spy on and destroy civil society. The use of the now-extinct National Security Law to harass opponents and the attempts to contract a spyware system used by authoritarian governments to hack the mobile phones of political opponents reveal that Bolsonaro is not committed to democratic values.

Commitment: Keep protecting the right to life, to liberty and to individual security

Reality: The Covid-19 pandemic is a good example of how the federal government is not committed to the right to life of Brazilians. As demonstrated by the Covid Inquiry Commission in the Senate – based on documents, testimonies and studies – Bolsonaro and his ministers and allies systematically blocked measures to contain the spread of the virus, while defending so-called herd immunity and early treatment with drugs that are ineffective against Covid.

This commitment cites the defense of the life of unborn children, which in other words means attacking sexual and reproductive rights, including those already guaranteed by legislation. Furthermore, behind the claim of defending the right to liberty and individual security is a policy to expand access to firearms, in spite of high rates of gun violence in the country, which disproportionately affects black youth from poor neighborhoods.

Commitment: Protect the rights of indigenous peoples in keeping with Brazil’s international commitments

Reality: Attacks on the rights of indigenous peoples are part and parcel of the federal administration. Bolsonaro, for example, has already expressed his position in favor of the time frame thesis for the demarcation of indigenous land, which ignores historic violations suffered by these peoples accessing their territories. Add to this the disregard for indigenous peoples during the Covid-19 pandemic, a matter that was addressed in the Supreme Court in a case requiring the federal government to provide assistance to indigenous communities during the health crisis.

Furthermore, the government base in the National Congress is supporting proposed legislation that shows no concern for environmental protection or climate change, in an attempt to create loopholes to reduce protected areas and expand illegal mining and agriculture, two activities that are harmful to indigenous peoples.

Reality: Even though the government talks about “redoubling efforts” to combat racism, there is no federal policy on this issue. On the contrary, the appointment to the head of the Palmares Foundation of Sérgio Camargo, who has attacked the main symbols of black culture in Brazil, is one example of the lack of commitment to the antiracist agenda. Even more problematic is the federal inaction in response to the violence and other social dramas that directly affect the black population from poor neighborhoods, such as unemployment, hunger, torture and contemporary slavery.

On the pretext of controlling the pandemic, the federal government issued several decrees banning entry to refugees and immigrants, especially Venezuelans and other groups coming to the country across land borders. In the meantime, tourists continued to fly into Brazil’s airports. The unjustifiable and discriminatory measures go against the recommendations of health and human rights experts that show that the country can accept people by adopting health protocols, thereby making it clear that combating xenophobia is also not one of its priorities.

Commitment: Adopt and implement measures to strengthen and protect families

Reality: Bolsonaro constantly ignores the diversity of family compositions in Brazilian society to emphasize a supposedly traditional family. The president forgets, however, that millions of Brazilian homes are formed, for example, by single mothers and LGBTQIA+ families. Statements that emphasize the supposedly traditional family only serve to encourage violence against minority groups, which is even more serious for a government that does not have policies in place to protect these minorities.

Reality: The mechanisms for accessing public information have also been targeted by the Bolsonaro government. In March 2020, in Provisional Measure 928, which contained measures to combat the Covid-19 pandemic, the government included an article that, in practice, suspended the processing of freedom of information requests and, as such, interfered in the proper functioning of the Freedom of Information Law, which has been in effect since 2012. In April 2020, political parties and the Brazilian Bar Association asked the Supreme Court to overturn the measure. The court accepted the petition and the justices unanimously ruled that the measure violating the Freedom of Information Law was unconstitutional.  Congress, meanwhile, did not vote on the measure within the deadline of 120 days, as legislation requires, and as such the measure lost its effectiveness.

Commitment: Guarantee the right to freedom of peaceful assembly and association, as an integral part of public involvement in democratic life

Reality: Submitted by the pro-Bolsonaro Congressman Victor Hugo, Bill 1595/2019, which provides for “counter-terrorist actions” and is still pending in the Lower House, reveals how Bolsonaro and his allies are not interested in guaranteeing freedom of peaceful assembly and association. The bill establishes, among other things, the creation of a “secret police” under the direct command of the President of the Republic, paves the way for the criminalization of protests and turns “preparatory acts” into a crime; in other words, it creates forms of police intervention without the need for a crime to actually have happened, as mere intentions can be considered crimes.

Commitment: Take additional steps to guarantee and promote the human rights of women

The firm efforts of the Ministry of Women, Family and Human Rights to set back the gender and sexual and reproductive rights agenda demonstrate a lack of commitment by the federal government to the human rights of women. In foreign policy, the government has taken on a type of paradiplomacy in defense of this conservative agenda, attempting to give Brazil leadership in this field, as shown by the report “Anti-gender offensive in Brazil: State policies, legislation, social mobilization”, prepared with the support of Conectas. This is the context in which the Brazilian document from the Summit for Democracy cites the defense of the life of unborn children, when talking about the defense of life.