Security crisis in Espírito Santo not yet over, says expert 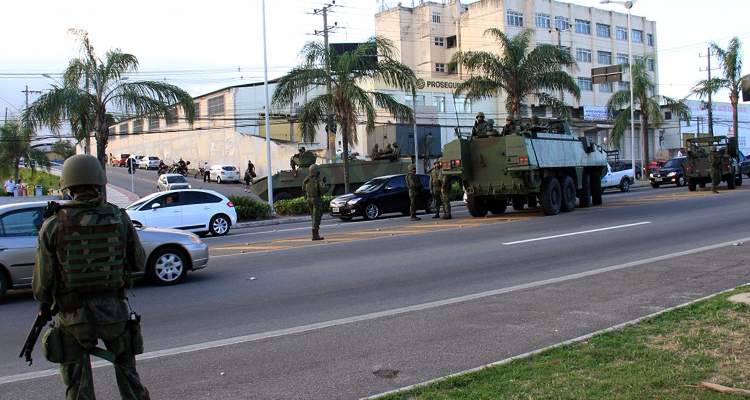 The families of the victims of the worst public security crisis in the history of Espírito Santo, which occurred in February last year, are still waiting for answers from the authorities on the more than 200 deaths recorded during the 21 days the military police went on strike in the state.

For Bruno Toledo, president of the Justice and Peace Commission of the Archdiocese of Espírito Santo, the episode that shocked people in the state and across Brazil represented the pinnacle of a much more profound and lasting crisis that continues to this day. “We’re still in February 2017,” said the human rights activist.

Toledo believes the authorities missed a major opportunity to start an urgent dialogue to restructure the police forces that would benefit both public security professionals and society. Moreover, he accuses the government of not having made an effort to provide answers for the hundreds of deaths recorded in such a short space of time.

See below some of the highlights of the conversation:

The causes of the crisis

We shouldn’t try to make sense of last February’s monumental crisis without looking back at the past. We need to understand something about the complexity of Espírito Santo and everything that is related to public security. It seems very superficial to me to try and boil the crisis down to the movement of wives demanding better salaries and working conditions for their husbands. While this did happen, it’s hardly the best analysis on the crisis. I prefer to go further back in time because we need to understand that Espírito Santo is a state with its own specific characteristics.

We are a very small state. The population is quite small and the capital city is small, but the rate of violence is very high, very significant. We need to look back at the police that we’ve had in the past. We had a death squad formed from among police ranks acting under cover of the law. The relationship of police fighting crime has never been about criminals on one side and police on the other.

Furthermore, at the start of the 2000s we had less than 2,500 people in prison and we now have nearly 20,000. How did this happen? It was the state arresting increasingly more people, transforming civil police officers into prison guards… For a long time, we didn’t prioritize the military police, from the perspective of technical, human and ethical professionalization. Particularly in the aftermath of what the military police was during the years of Scuderie Le Cocq [a death squad formed by former military police officers and other security agents]. This has not been addressed in Espírito Santo or anywhere else in Brazil since redemocratization.

Demands of the police

We are talking about a police force that is under increasing pressure to respond to this violence. A force that is also held in low regard, due to its promiscuous relations with crime. Not to mention the political issues at play. The military police increasingly figures as a political actor. The police have become an element in this election scenario.
The demands are fair from a labor perspective. Very low salaries, a long time without a pay rise, no meal vouchers and a shortage of bulletproof vests, which officers take turns to use.

Attempts at negotiation have been made in the past. At no time was there a predisposition [by the government] to dialogue.

There was widespread support in the police force for the demands. After all, it was all the police in the whole state who went on strike.

However, there was also some political opportunism, criminal opportunism and other situations involved.
Ongoing crisis

We need to think beyond February. The month of February 2017 has still not ended. The situation today appears to be one of normalcy, but the scars are still open, within the Military Police and within society.

Despite there having been more than 200 deaths, the Public Prosecutor’s Office denounced less than 50.
Inaction by the state

There was a much stronger response by the state to hold to account those responsible for the strike than to find those who committed the murders that occurred over the period. Much more energy was spent finding the officers and family members involved in the mutiny. Probably because the victims are anonymous, nobody knows who they are and they are mostly young black men from poor neighborhoods. So they did not receive the same priority.

It’s not just about listening, but also about turning these demands into concrete actions.

At the end of the day, we still have this difficulty. Everything was done without considering how we got here.

The Brazilian Bar Association conducted a very interesting study of the death certificates. The majority indicate execution. It cannot be said with certainty that there were no death squads operating. During the crisis there are clear reports of masked men killing people. It would be rash to assert this categorically, but the state has a history of this [regarding the actions of death squads]. They operated for 30 or 40 years. The Civil Police, the Public Prosecutor’s Office and the government are responsible for determining whether this occurred.

Reform of the police

It is necessary to democratize public security. We need to have a stronger Ombudsman’s Office.

Nearly 700 police officers left the force after the crisis of February 2017. What’s more, there are extremely high rates of depression and suicide among the police. After this latest episode, more than 300 needed psychiatric treatment.
We need to set higher qualification standards for police officers, rethink entry into the police force, discuss how to address human rights with these professionals.

As for civil society, it was clear that an end to the crisis without dialogue would only cause the crisis to be prolonged. After all, what level of commitment will these police officers have, after nothing was done to meet their demands?
We urgently need a restructuring of the military police in all its aspects. The crisis was a missed opportunity to rebuild these relations. Naturally, there is a rift between the military police and Brazilian society. Society rightly distrusts the police given its history.

But the government could certainly have offered conditions for the police to go back to work with a bit more dignity.
We know improvements need to be made to the police, but this doesn’t mean we should tone down the condemnation. The fact that they have bad working conditions doesn’t mean they can operate outside the law.

We are experiencing a process of naturalization of having the armed forces involved in everyday situations. And I see countless problems with this. I was deeply alarmed when the armed forces arrived in Espírito Santo. There was a lot of hysteria at the time, with major support by the media which filmed the troops entering the state and the population applauding without realizing what it really meant. Troops being used for situations they are not trained for. More important still is how we as a society want to solve this problem of urban violence. We are legitimizing war as a solution. We are applauding the response by the government that the armed forces are the solution to drug trafficking. We are in a very dangerous process of legitimizing a civil war scenario.

The use of the armed forces is unconstitutional. It is interesting to note that the state wants the police to respect the Constitution [that forbids the police from striking] while not respecting it itself.