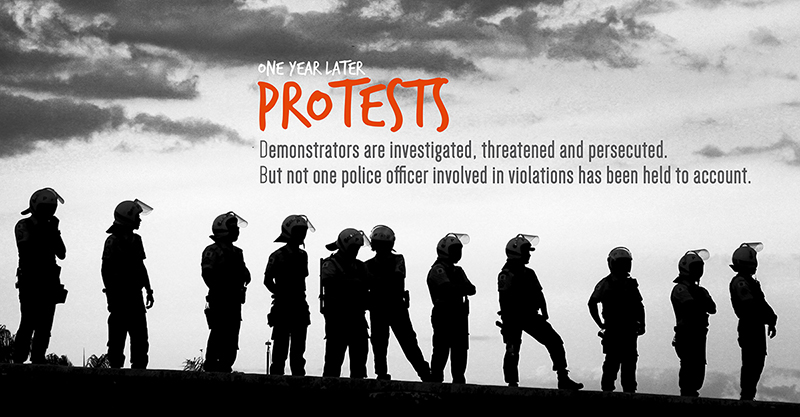 One year after the protests began in São Paulo, the State Public Security Secretary, Fernando Grella, is determined to definitively remove demonstrators from the streets. In a recent interview with the Reuters news agency, Grella defended Police Inquiry No. 1/2013, opened to investigate hundreds of people directly or indirectly linked to the protests, and announced that arrests would be made before the World Cup.

“It is preventive policing,” said the secretary, confirming the suspicions of social movements and human rights organizations that see the investigation as a tool of control and persecution.

Conectas has been condemning the crackdown on demonstrators and the abuses committed by the police since last year (see the chronology below). According to the organization, what is known as the ‘black bloc’ inquiry is part of a coordinated effort between the Executive, Legislative and Judiciary to limit the right to protest.

“You don’t conduct an inquiry to investigate people, but to look into alleged criminal acts. If the police is unable to identify a criminal act, then the investigation is illegal,” said Rafael Custódio, coordinator of the Justice program at Conectas. “This type of procedure, typical of authoritarian regimes, has the declared purpose of curbing protests.”

The inquiry opened in October 2013 does not define the target of the investigation, but hundreds of people have already been summoned to testify – including the parents of demonstrators and people who never even participated in the protests, according to reports. The Public Security Secretary’s apparent intimacy with the progress of the investigation is also worthy of attention. Grella even predicted that arrests would be made “over the next few weeks”, precisely when the demonstrations are expected to intensify, illustrating the political control of the process.

The efforts of the Public Security Secretary to criminalize demonstrators contrasts with the lack of interest by the authorities in cases of police violence during the protests. According to an article published in the O Estado de S. Paulo newspaper on May 31, none of the Military Police officers accused of violations during the June 13 repression have been identified, despite the abundance of audiovisual recordings of the event.

According to 10 testimonies collected by Conectas at the time, the police indiscriminately pursued, arrested and assaulted demonstrators, journalists and residents from the neighborhoods along the route of the protest.

The Public Security Secretary is implacable about the investigation into demonstrators, but he has nothing to say about the failure to identify the officers involved in abuses broadly reported by the press. “If we are talking about the same police corps, the same financial and human resources, why can’t they make progress identifying and holding these officers accountable?” asks Custódio.

One year on the streets

Since the protests against an increase in public transport fares first began, in June 2013, Conectas has been engaged in the debate, calling for action from the authorities and condemning violations committed against demonstrators. See the chronology of activities:

Conectas recorded and published 10 testimonies on the police action of June 13. They suggest that, instead of trying to disperse the demonstrators, the police encircled thousands of people, trapping them in tear gas filled streets in the downtown region of the city and firing on them with rubber bullets and light and sound grenades.

Together with the NGOs Reporters without Borders, Aprendiz, Article 19 and the National Forum for the Democratization of Communication, Conectas organized a news conference to discuss the violations of freedom of the press and freedom of expression at the demonstrations.

Conectas organized two meetings between journalists and police officers to discuss aggression against the press and the safety of communication professionals during the protests.

The organization filed with the São Paulo State Public Security Department 8 questions to identify those responsible for the police action on June 13. The intention was to discover where the order for the repression came from and how it was passed down through the police chain of command until it was executed on the streets. The filing also requested information on the amount of ammunition employed and the investigation of the abuses committed. To date, no satisfactory response has been given by the São Paulo authorities.

The Free Fare Movement – which advocates for free public transport and has played a prominent role in the protests, Conectas and another 16 partner organizations also requested that the São Paulo State Prosecutor’s Office investigate the conduct of São Paulo Military Police Lieutenant Colonel Ben Hur Junqueira Neto, who, in a statement recorded by public defenders on the evening of June 13, said he was arresting demonstrators for “verification”, which is manifestly illegal and may constitute an abuse of power. The complaint was accepted by the Office in April.

Conectas, the Brazilian Public Security Forum, the FGV Law School and the Sou da Paz Institute organized three public seminars on police demilitarization. The debates were held with experts and brought together hundreds of people between September and October.

Brazilian organizations, among them Conectas, presented more than 200 cases of police violence at demonstrations to a thematic hearing in the IACHR (Inter-American Commission on Human Rights). The Brazilian authorities present at the meeting evaded the issue, ignored questions and touted a number of bureaucratic measures, but failed to convince petitioners or members of the Commission.

During the 25th session of the UN Human Rights Council, in Geneva, Conectas and the Argentine organization CELS (Center for Legal and Social Studies) sent a letter to Member States calling for changes to the proposed resolution on peaceful protests presented by Turkey, Costa Rica and Switzerland. The text of the resolution limited human rights guarantees to acts that are considered peaceful. The resolution was approved without the alterations proposed by the organizations.

Conectas and IDDD (Defense of the Right to a Defense Institute) filed with the CNJ (National Justice Council) a motion for the immediate suspension of ‘express justice’, a system created by the São Paulo State Court to hold on-the-spot trials of demonstrators arrested by the police during protests. The request for the suspension was denied by Judge Deborah Ciocci on June 6.

Conectas, IDDD (Defense of the Right to a Defense Institute), Justiça Global, Article 19, IDDH (Defenders of Human Rights Institute) and Greenpeace Brasil sent members of the CCJ (Constitution and Justice Commission of the Senate) a technical opinion recommending the rejection of Senate Bill 518/2013, drafted by Senator Armando Monteiro. The bill, which has yet to be voted, increases penalties for crimes committed in the context of “concentrations of people”.