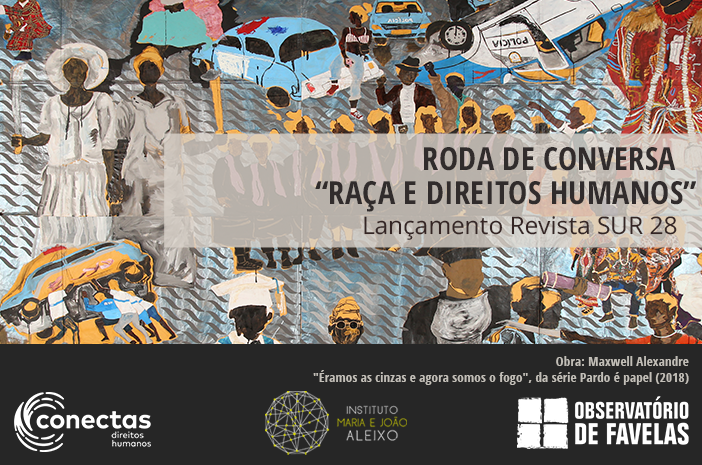 Conectas, in partnership with Observatório de Favelas and with the support of Instituto Maria and João Aleixo, is holding a discussion group on “Race and Human Rights” on Friday, 15 February, bringing together a number of researchers, black feminists and activists working on the antiracism struggle in Brazil. This open debate will start at 6pm, at the Observatório de Favelas (R. Teixeira Ribeiro, 535), in Maré, in Rio de Janeiro.

Subjects such as structural racism, the impact of the war on drugs on black youth, black feminism in Brazil and the role of racial equality on the human rights agenda will be discussed. The event also marks the launch of the 28th edition of Sur Magazine, which, for the first time since it started, is entirely dedicated to this theme.

The following have confirmed their participation: Thula Pires, Undergraduate and Postgraduate Lecturer at the PUC-Rio Law School and Coordinator of the university’s Núcleo de Reflexão e Memória Afrodescendente (Centre for Afrodescendant Reflection and Memory); Lívia Casseres, Public Defender in Rio de Janeiro and Coordinator of Núcleo Especializado contra a Desigualdade Racial (Specialist Centre against Racial Inequality) and Rhuam Fernandes, Founder and Coordinator of the community organisation Nós por Nós (Us for Us) and a member of the Frente Negra UERJ (Black Front at the Rio de Janeiro State University).

During the event the mini-documentary “Luto para nós é verbo” (For us Grief is a Verb) will be shown. The documentary is the work of Natasha Neri, Director of the documentary “Auto de Resistência”, winner of the ‘Festival É Tudo Verdade 2018’, in which mothers and family members of victims of state violence, tell their stories.

Sur – International Human Rights Magazine is published by Conectas. It seeks to influence the global human rights agenda, producing, promoting and publishing innovative research and ideas, principally from the Global South, on the practice of human rights.

The publication is edited in Portuguese, English and Spanish, with free online access to a public of over 20,000 people, in over 100 countries. A hardcopy version is also distributed to some of the principal libraries, universities and international organisations and cultural centres around the world.

The 28th edition, entitled “Race and Human Rights, Moving Structures”, has 17 articles, written by 23 authors from six different countries, one of whom is the UN Special Rapporteur on contemporary forms of racism, E. Tendayi Achiume. Also, Researchers Juliana Borges, Thula Pires and Nathália Oliveira. Sueli Carnero was the Guest Editor of this edition. She is the Founder and current Director of Geledés – Instituto da Mulher Negra (Institute for Black Women) and Adviser to Conectas. She is one of the main activists for black feminism in the country.

Event: Debate “Race and Human Rights” and Launch of Sur 28