Military police violates rules on the use of the force 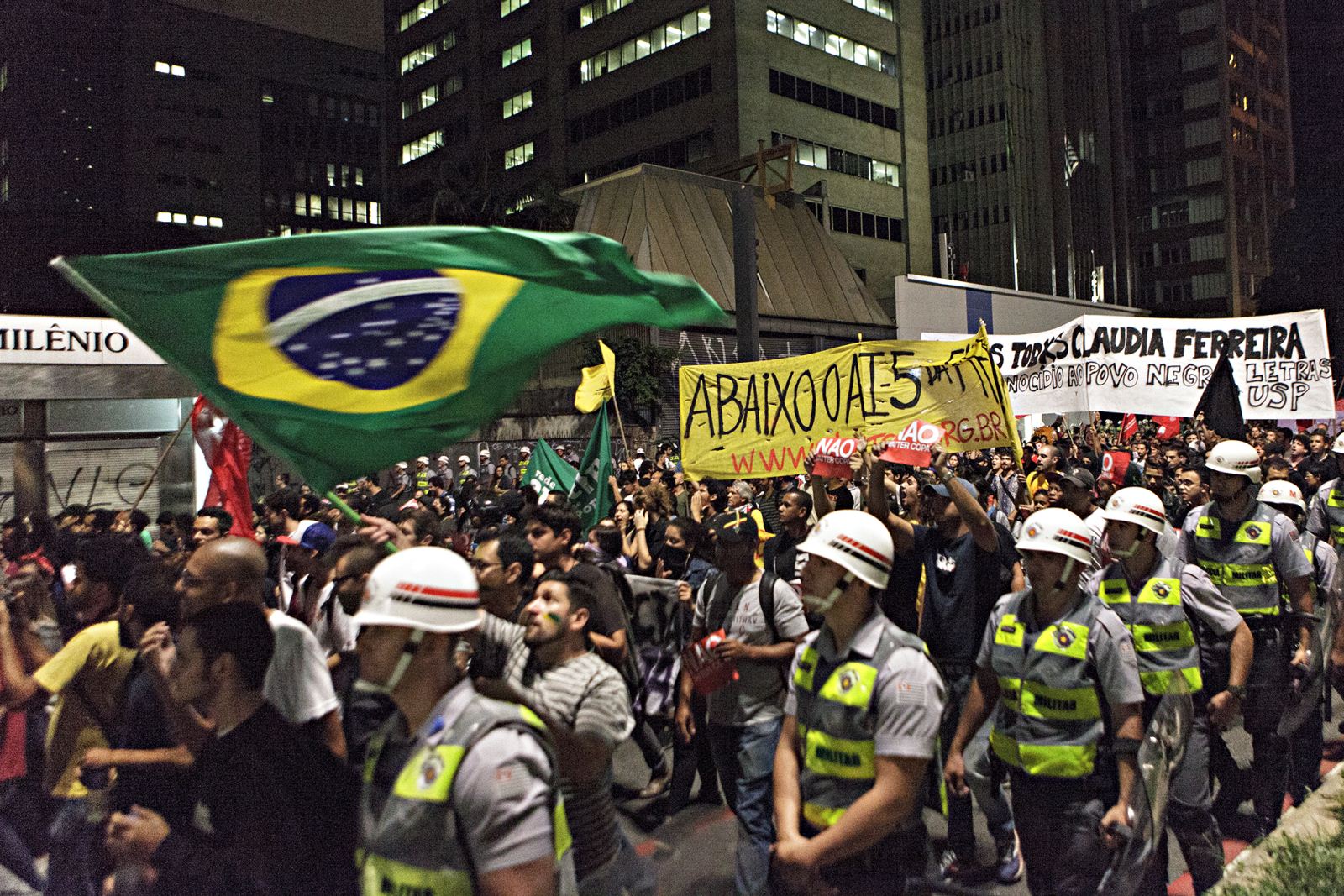 Just over 20 days before the start of the World Cup, the São Paulo Military Police dispersed a peaceful protest last night in the downtown part of the city, using excessive force and violating several rules that regulate police action at demonstrations.

At around 7 PM, riot police officers fired tear gas into the crowd for no apparent reason, scattering the demonstrators in all directions. Thousands of people who were marching down Rua da Consolação towards the city center were forcibly turned back by the police and, when they continued in the opposite direction, towards Avenida Paulista, they encountered another police line, meaning the only exit was the viaduct that connects the region of Consolação/Paulista to Avenida Dr. Arnaldo.

As the demonstrators were walking calmly along the designated street, a tear gas canister was hurled by police into the demonstration. Immediately afterwards, others were fired by shotgun, causing a commotion. People who were on the viaduct ran the risk of falling off and they experienced moments of panic. Hundreds took refuge inside the Consolação subway station, intoxicated by the tear gas whose effects could be felt inside the tunnels.

“The Military Police chose to break up a march in which thousands of citizens were participating completely peacefully,” said Rafael Custódio, coordinator of the Justice Program at Conectas.  “It’s not up to the police to determine when a protest should end. This is not a duty of the police. The right response should have been to guarantee the safety of the demonstrators, not to put them at risk and curtail the right to protest,” he said.

Other accounts reveal that the Marechal Deodoro and Consolação subway stations were also clouded by tear gas fired by the police. The Riot Police also cordoned off streets and used police vehicles to direct the demonstrators into the subway stations, forcibly dispersing the crowd and declaring the end of the protest.

The work of the Military Police in these circumstances is governed by specific rules that ought to be strictly observed. Conectas and the Citizenship and Human Rights Center of the São Paulo Public Defender’s Office have already presented the São Paulo State Public Security Department with this series of recommendations.

The document is grounded on Brazilian legislation, but also on recommendations from the United Nations, established practices of the European Union and pronouncements of the Inter-American Human Rights System of the OAS (Organization of American States), as well as other studies, interim decisions and court rulings. It constitutes a robust network of recommendations to be observed by the police forces.

It was delivered to the São Paulo State Public Security Secretary, Fernando Grella, in August 2013, two months after the most critical chapter of police violence against demonstrators since the protests first started, originally sparked by indignation over the price of public transport in the city of São Paulo.

Besides emphasizing the constitutional guarantee of the right to peaceful assembly “without weapons, in places open to the public, regardless of authorization”, the document points out that “everyone has the right to associate freely for ideological, religious, political, economic, labor, social, cultural, sports, or other purposes”, before listing some basic guidelines for police action in these circumstances.

The document clearly states that the government should tolerate urban inconveniences, such as traffic interruptions, to guarantee the right to protest. It cites Supreme Court decisions in Brazil, as well as rulings from the European Court of Human Rights and the European Court of Justice. Traffic disturbances do not justify dispersing marches and protests.

The same applies for isolated acts of violence during protests, reads the text, such as “damage to public or private property or aggression against others”. These acts alone “do not turn a peaceful assembly into a violent one (…) and require precise and localized action to detain the violent participants and allow the other demonstrators to continue exercising their right to assembly”. On this point, the document cites rulings by the European Court of Human Rights on cases in Moldavia and Austria, which emphasize the duty of the State to “protect demonstrators, assuring the means necessary for the right to assembly to be regularly enjoyed”.

In cases of police action against illegal acts, the document suggests “replacing the doctrine of progressive force with the doctrine of negotiated management”, whose ultimate goal is the “protection of rights and the facilitation, not repression, of the demonstrations”.

Therefore, it is essential for all police officers to have “demonstrable identification” and for the riot police to be kept “out of sight while they are not needed”. These measures reduce tension and prevent an escalation of provocations and retaliations.

In extreme cases, “the decision to disperse an assembly should be taken in line with the principles of necessity and proportionality, and only when there are no other means available to protect the public order from an imminent risk of violence”. Ongoing communication between the police and the organizers of the demonstrations is also essential.

The decision to disperse a protest – when legitimate – “must be clearly communicated and explained, to obtain, as quickly as possible, the understanding and compliance of the demonstrators. Enough time must be given for the demonstrators to disperse,” reads the recommendation, pointing out that “firearms should never be used for the purpose of dispersing the crowd”.

“Firearms should never be used for the purpose of dispersing the crowd,” reads the text. Moreover, “truncheons and similar impact equipment should not be used on people who are not behaving in a threatening or aggressive way” and, when they are used, they should not target vital areas of the body.

Tear gas should not be used in confined areas, nor fired at close range or at a person’s face. In cases of injury, the police should provide immediate medical assistance, and also record complaints and identify the people accused of abuse. Whenever firearms or less-lethal weapons are used, “public security agents should fill out an individual report”.

Considering that “there is no right to privacy for police officers in the performance of their functions”, the Military Police should not impose any constraints on people who want to record the actions of public employees in public places, while they are performing their public functions.

Finally, the document highlights the necessity for “technical training to be provided to officers who police public demonstrations”.

* The images used throughout this article are intended to graphically illustrate and exemplify the information contained in the text. Only the first image was taken at yesterday’s protest.