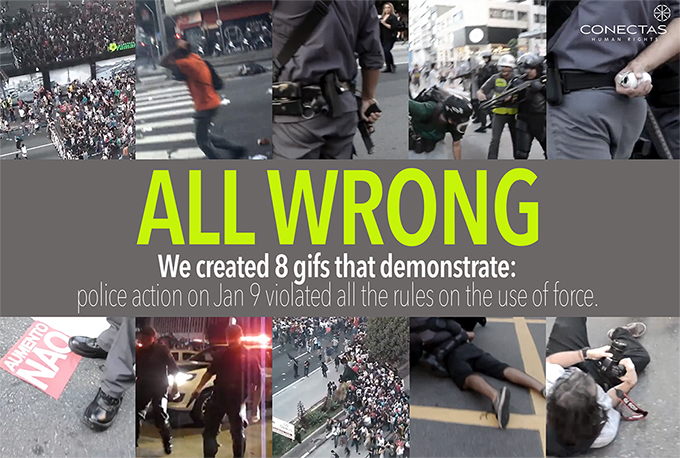 Images that appeared on the internet just hours after the protest on January 9, organized by the Free Fare Movement against the increase in public transport fares in São Paulo, are starting to expose the holes in the official explanations for police violence against the demonstrators – who numbered 5,000 according to the Military Police and 30,000 according to the organizers.

Videos, photographs and written accounts demonstrate the series of errors, excesses and abuses committed by the Military Police. Repeating the same infamous techniques used on June 13, 2013, already denounced by human rights NGOs to international bodies, the security forces dispersed the protesters for no apparent reason, assaulted and intimidated demonstrators, made arbitrary arrests, harassed the press and made abusive use of less-lethal weapons.

In the official letter, the organizations show that the Military Police violated constitutional rules and recommendations of the United Nations and the Inter-American Commission on Human Rights of the OAS (Organization of American States). These same rules had already been detailed in a document sent to the Public Security Department by Conectas and the Public Defender’s Office in August 2013. The widespread non-compliance prompted the Public Defender’s Office to file a public civil action against the state government in April 2014.

How should the police have acted and what did they actually do?

“The gross violations committed by the Military Police on January 9, documented by Conectas and other human rights organizations, should serve as a warning of a new wave of violence and abuse by the police. Isolated incidents can never justify the dispersal and repression of all the demonstrators,” said Juana Kweitel, director of Conectas. “The police have demonstrated an institutional inability to learn from the mistakes of the past and to listen to civil society, which for a long time now has been denouncing the Public Security Department’s lack of commitment to international norms on the use of force,” she added.

The day before the demonstration, Conectas, Article 19 and the Human Rights Center of the São Paulo Public Defender’s Office condemned the statements made by the commander of the operation, Major Larry de Almeida Saraiva, who threatened to encircle the protest and search passers-by.

The freedoms of assembly and expression are described in articles 10 and 19 of the Universal Declaration of Human Rights, in the International Covenant on Civil and Political Rights and also in articles 13 and 15 of the American Convention on Human Rights.

There are other international standards that regulate the role of the police at protests, such as the Basic Principles on the Use of Force and Firearms by Law Enforcement Officials, adopted by the UN in 1979, and the reports on Citizen Security and Human Rights (2009) and the Situation of Human Rights Defenders in the Americas (2012), both by the Inter-American Commission on Human Rights.

They all prohibit the use of lethal weapons, establish clear rules for dispersal, reinforce the principles of proportionality and strict necessity, and require the clear identification of each individual police officer.

See the full versions of the videos used by Conectas: