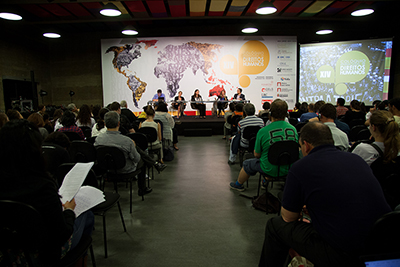 For Jessica Morris, of Conectas, Guantanamo is a ‘legal black hole’

Despite being created and maintained by the United States government as a response to the attacks of 9/11, the existence of the U.S. prison at Guantanamo is an international problem and its solutions require a global commitment – in particular through the resettlement of the 57 detainees who have now been cleared for transfer. This was one of the conclusions of the debate “The U.S. and torture: from Guantanamo to the CIA’s secret prisons”, staged on Wednesday, May 27, in São Paulo, during the 14th International Human Rights Colloquium.

“It is an affront to the international human rights system,” said Jessica Carvalho Morris, the new executive director of Conectas. “It has created a legal black hole.” Polly Rossdale, of the organization Reprieve, provided some concrete examples of how this legal limbo has permitted ongoing violations at the prison. Rossdale, who has coordinated the resettlement of 30 former prisoners over the past six years, cited the case of the Yemeni student Emad Hassan, who was arrested in Pakistan. “The United States was paying bounties for turning people in. This was the so-called ‘intelligence’. Nearly 86% of the men imprisoned in Guantanamo were not captured by the U.S. army, but by third parties,” she explained.

Emad has been on a hunger strike for eight years and has already lost 43 kg. He and another 48 Yemenis have been cleared for release, but by determination of the U.S. government – which claims that Yemen is not safe enough for them to return home – they are waiting for the possibility of resettlement in other countries. “I believe that Latin American nations have an important role to play in helping to end this tragedy,” she said.

“But why should countries like Brazil care?” asked Jamil Dakwar, of the ACLU (American Civil Liberties Union). According to him, because the problem is not just the existence of the prison, but the possibility of exporting the model – and its impact on the global defense of human rights. “If the United States, one of the world’s most celebrated democracies, can create a legal framework that permits the existence of Guantanamo, then why can’t other countries do the same?”

Gastón Chillier, executive director of Cels (Center for Legal and Social Studies, of Argentina), drew attention to another consequence of Guantanamo and the systematic practice of torture by the CIA (Central Intelligence Agency): the undermining of international law, of the consensus built by countries on the prohibition of torture and of the duty to investigate violations.

Mentioning the advances occurred in Latin America towards the reconstruction of memory and truth, he said that torture and forced disappearances are nothing new and they were certainly not invented by the United States. “The difference – and this is the key point for the human rights movement – is that, in our countries, these practices were committed by authoritarian governments or clandestinely in contexts of armed conflict,” he said. “We have the responsibility to generate the conditions for there to be accountability for the crimes committed by the United States. The challenge is enormous, but we have to be up to it.