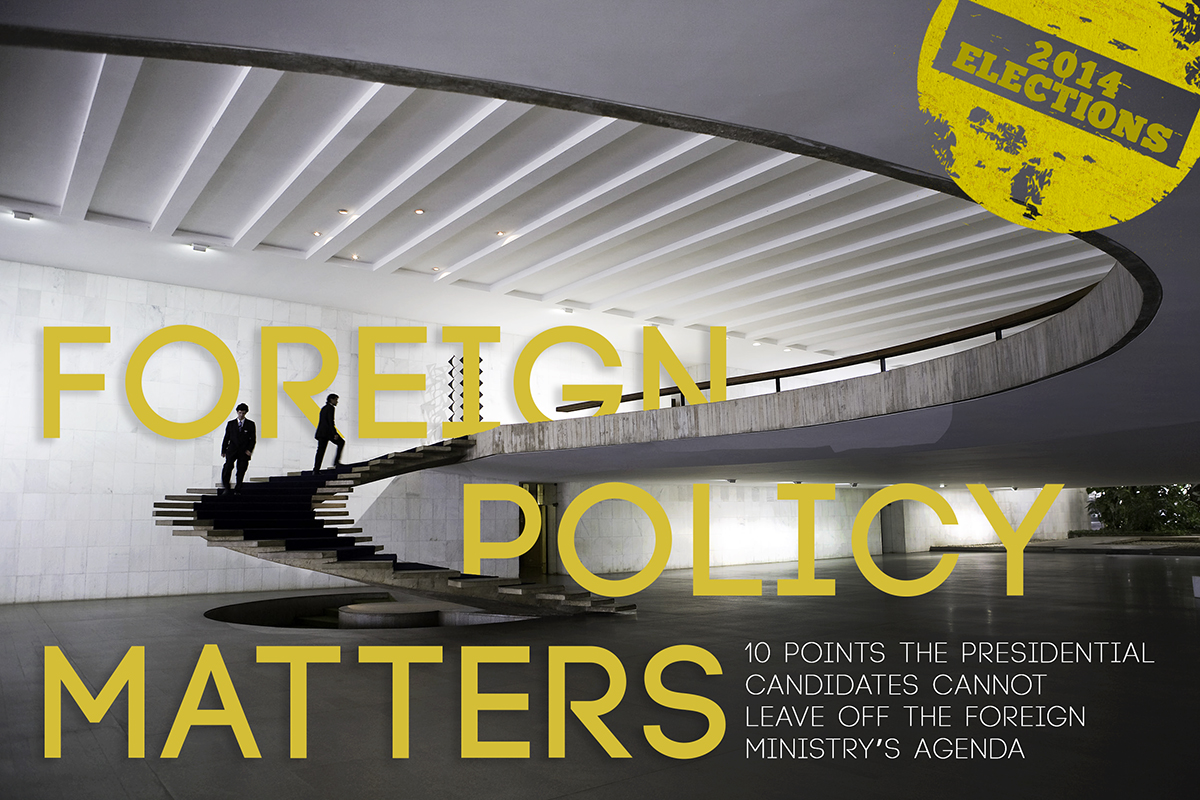 In addition to responsibility for domestic issues, the candidate elected President of Brazil in October will also be responsible for guiding the country in its role as a rising player on the world stage. To date, however, foreign policy issues have been largely ignored in the election debates.

In the global context, there are parallel crises that require more prominence and leadership from emerging countries like Brazil, which is unapologetic about its intentions to take on more responsibilities in the management of global challenges. Domestically, meanwhile, the debate on the transparency and democratization of foreign policy has increased significantly, with initiatives being developed both inside and outside the Ministry of Foreign Relations.

Besides the commitment of the Ministry to step up its contact with civil society, made by former minister Antônio Patriota and reaffirmed by the current minister Luiz Alberto Figueiredo, organizations working in the field have been calling for the application of two concrete proposals: the preparation of a White Paper, containing the guidelines of Brazil’s international action; and the creation of a National Council on Foreign Policy, a consultative body to serve as a formal communication channel between civil society and the Executive Branch.

As a result, the CBDHPE (Brazilian Human Rights and Foreign Policy Committee), of which Conectas is part, has submitted 10 proposals to the future president in order to present a critical assessment of how dialogue between human rights and foreign policy occurs in practice.

“There are several ways for Brazil to demonstrate a genuine commitment to human rights in its foreign policy. For example, the country could provide unmistakable proof of its commitment to the regional system by increasing its voluntary financial contribution to the Inter-American System and guaranteeing its full operation,” said Camila Asano, coordinator of the Foreign Policy program at Conectas. “This position should also be clear in its voting record on resolutions in the General Assembly and the Human Rights Council, eliminating any ambiguity and striving for consistency regarding the human rights situations in other countries envisaged in article 4, item II of the Federal Constitution,” concluded Asano, emphasizing some of the points of the 10 proposals.

The document also stresses the need to increase the number of technical cooperation projects in the area of human rights, step up humanitarian aid donated in cases of serious crises and make a firm commitment to preventing and combating rights violations caused by the actions of Brazilian companies abroad.

See a summary of the proposals:

Click here to read (in Portuguese) the document in full

In the run-up to the 2010 elections, the Committee presented a similar agenda at a seminar held in Brasília, in partnership with the Commission on Human Rights and Minorities of the lower house of Congress. The agenda was unanimously endorsed by Congressman Fernando Gabeira, the former Justice Minister José Gregori and the former Special Secretary for Human Rights Nilmário Miranda, representatives, respectively, of the then presidential candidates Marina Silva, José Serra and Dilma Rousseff.