Ending the Oppressive Search :: A year of mobilization 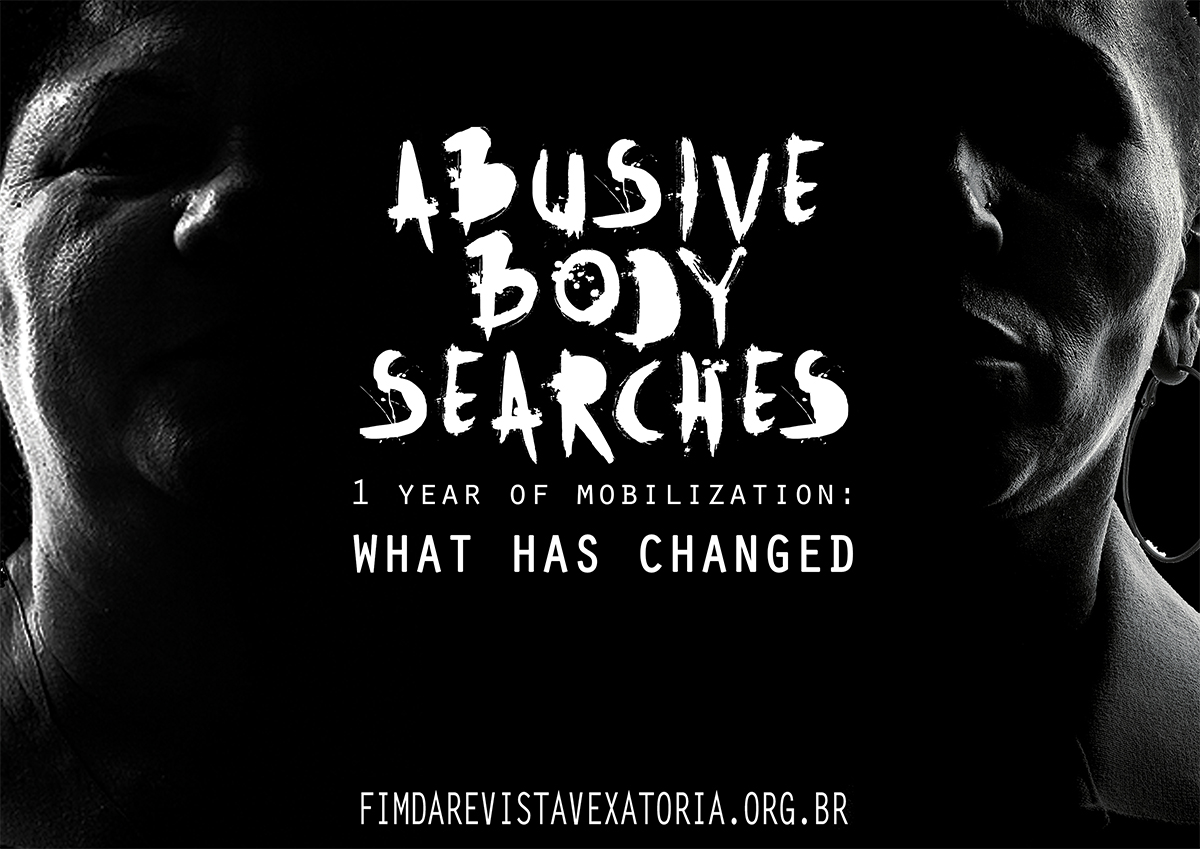 Under the justification of preventing the entry of drugs, weapons and mobile phones into prisons, political authorities have perpetuated a practice as violent as it is inefficient and perverse: the abusive search.

Over the course of the past year, this illegal practice has become known to the Brazilian public and discussed by authorities from the three branches of government. The good news: the country has been making progress towards banning it.

This type of search, which requires people who visit their imprisoned relatives in Brazil to undress, squat over a mirror and even have agents of the State touch their genitals, acquired international notoriety following the campaign “For an end to the Oppressive Search”, launched on April 23, 2014 by the Criminal Justice Network and Pastoral Carcerária, the Catholic Church’s prisoner outreach service.

Since then, the campaign’s website (pelofimdarevistavexatoria.org) has been accessed more than 6,000 times and 3,500 people have signed a petition calling for the approval of a federal law to put a stop to the practice. The exposure of the topic in the media was followed by public debates and events.

Map of the abusive search, released today, records important breakthroughs in Brazil since the start of the campaign.

Over the course of the past year, a federal bill banning abusive searches in all prison facilities across the country was approved unanimously in the Senate and in the Commission on Human Rights and Minorities of the Lower House of Congress. The proposal, now called Bill 7764/2014, is just a few steps away from becoming law. However, it still needs to be approved by the Public Security Commission and the Constitution and Justice Commission and signed into law by President Dilma Rousseff.

“The abusive search has to end. It is a practice that violates one of the most valued principles of the Republic: human dignity,” explained Juana Kweitel, program director at Conectas. “The map of the abusive search demonstrates that the public authorities have become aware of this fact and are taking steps accordingly. But there is obviously still a way to go before this humiliating practice is banned nationally,” she added.

Research conducted by the Criminal Justice Network, based on official documents supplied by the São Paulo State Prison Administration Department, revealed that only 0.03% of visitors were found carrying contraband. This means that for every 10,000 abusive procedures, forbidden items are found in just three cases. According to the study, there were no cases of weapons being seized.

Over the past year, some local ordinances have placed bans on abusive searches, such as the case of Decree 007/2014, in the Amazonas state capital of Manaus. This decree was issued based on the data contained in the study.

As the map of the abusive search shows, this practice that is considered cruel, inhuman and degrading treatment by the UN is now legally banned in at least seven Brazilian states. “It is important to point out that, despite the progress that these local ordinances represent, the abusive search has always been an illegal procedure from a constitutional standpoint, given its barbaric and degrading nature,” said Paulo Cesar Malvezzi, legal coordinator of Pastoral Carcerária.

Actress Denise Fraga reads the testimony of a victim of the abusive search. The video is part of the national campaign to end the procedure. Click here to watch all the videos.

In addition to the state-level restrictions, the map contains at least three other rules (laws, decrees, regulatory instructions or court decisions) banning abusive searches in municipalities from states that still have no legislation on the matter. Moreover, at least one ban was introduced at a single prison facility. “This proliferation of rules demonstrates that the end of the abusive search is on its way to becoming law in the country,” said Natália Damázio, a lawyer for Justiça Global.

Despite the progress, however, recent events demonstrate that the struggle continues. In the state of Rio de Janeiro, for example, where a resolution regulating the search procedure has been in place since 2009, a bill banning the practice was approved by the state legislature only to be vetoed by the governor Fernando Pezão.“This setback in Rio de Janeiro only reinforces the importance of approving the federal bill so the practice can be abolished across the country. Regardless, we hope that Rio de Janeiro’s lawmakers will overturn the governor’s veto,” added Raphaela Lopes, a lawyer for DDH (Defenders of Human Rights Institute).

The case of São Paulo is worth highlighting in this respect. A law approved by the state legislature and signed by the governor Geraldo Alckmin in August 2014 is being blatantly ignored, with no changes being made to the routine inspections of relatives in the prisons. The state that has the largest prison population in Brazil (nearly 200,000 people) continues to conduct the procedure that violates hundreds of thousands of people every weekend.

“What is happening today is a great collusion by the state, which is tolerating a practice that is not only unconstitutional but also demonstrably ineffective. The ultimate question is: who wins by continuing the abusive searches?” said Gabriela Ferraz, advocacy coordinator at ITTC (Land, Employment and Citizenship Institute).

As a result of this, public institutions (in particular the Public Prosecutor’s Offices and the Public Defender’s Offices), civil society organizations and the families of prisoners themselves have a fundamental role in monitoring the application of the rules, inspecting the situation in prisons and reporting violations.

The map of the abusive search was produced by Conectas based on information received from partners, the press, relatives of prisoners and its own inspection visits to the prison system. The collection of information was then checked with the responsible public bodies. It contains laws, decrees, regulatory instructions and court decisions on the topic. It was updated for the last time on April 23, 2015 with at least 10 bans, seven of which are statewide, two are municipal and one is valid only at a single prison. Many other important advances were also identified, but the map only includes rules that expressly ban total or partial nudity and genital inspections, touching or the use of mirrors or other objects and, further, that do not allow for any exceptions. Conectas reiterates that the searches must always respect people’s dignity and human rights and that the visits must occur without any suspicion preventing or limiting the contact between the relative and the prisoner. Furthermore, suspicions that the visitor may be carrying forbidden objects must always be officially recorded with the signature of the agent responsible and a witness, with a copy given to the visitor. The map is under permanent construction and will be updated whenever new information comes to our attention.