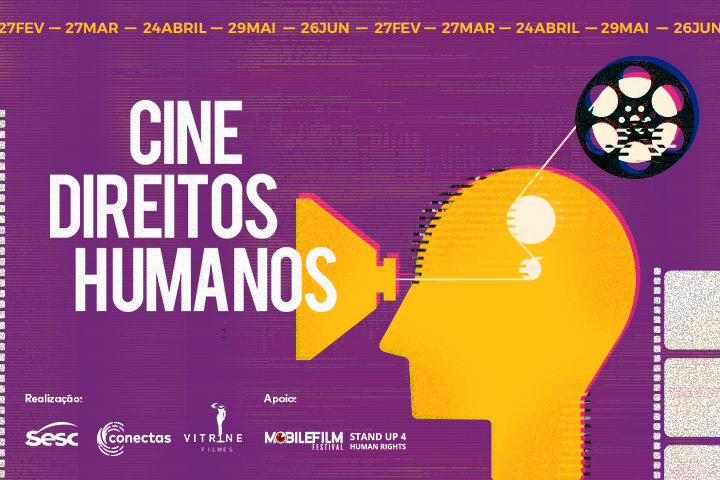 Conectas, Sesc 24 de Maio and Vitrine Filmes recognise the importance of cinema in prompting a reflection of reality and from February they will be holding monthly cinema showings, followed by discussion sessions between actors, filmmakers, activists and the public.

Cine Direitos Humanos will take place every last Wednesday of the month, starting at 6.30pm, in the Sesc at Rua 24 de Maio, 109, in the centre of São Paulo. Entrance will be free for all showings.

The first five films scheduled to be shown from February to June, will cover a wide-range of themes that will feed into the debates, such as the reintroduction of ex-detainees into society (Corpo Delito), female protagonism in a predominantly male environment (As Hiper Mulheres), the impact of electric light on the lives of indigenous tribes (A Nação que não Esperou por Deus), violence in underprivileged areas (Branco Sai, Preto Fica) and self-awareness and discovering sexuality (Hoje eu quero voltar sozinho).

Each session will be preceded with showings of films from the Mobile Film Festival/Stand up 4 Human Rights, one minute productions made on mobile phones by people around the world. This project, launched in 2018 to celebrate the 70 year anniversary of the Universal Declaration of Human Rights, consisting of 51 productions, is the result of a partnership between Youtube Creators for Change and the UN Agency for Human Rights.

>>> Mark your attendance at the event on our Facebook page.

Synopsis: Ivan, 30, has just got out of jail after eight years’ imprisonment. He is back home, living with his wife and a six-year old daughter he hardly knows. He has the chance to restart his life. However, Ivan is on probation. An electronic ankle monitor prevents him from going anywhere other than from his home to work or from work to home. He cannot go out at night. The boredom lifts only when Neto is around. Ivan sees himself in his new friend. He is still drawn to parties and having a wild time in the city, but now he is monitored round the clock by the police GPS.

Synopsis: Fearing the death of his elderly wife, an old man asks his nephew to carry out Jamurikumalu, the biggest feminine ritual of the Alto Xingu (MT), so she can sing for the last time. The women of the tribe start the rehearsals while the only singer who really knows the songs is seriously ill.

Synopsis: This documentary pivots around the indigenous tribe, Kadiwéu who live in Mato Grosso do Sul. The Director visited the tribe for the first time in 1999 to shoot another film and then in 2013/2014. In the almost 15 years that passed, electric light, television and evangelical churches have reached their home, as well as the struggle against cattle farmers for the Kadiwéu land. The film aims to analyse the different ways in which the tribe has faced these events.

Synopsis: Shots at a black music party on the outskirts of Brasilia injure two men who are scarred for life. A third one comes from the future to investigate what happened and to prove that repressive society is to blame.

Synopsis: Leonardo is a blind teenager in search of his independence. His daily life, his relationship with his best friend, Giovana and his outlook on life change with the arrival of Gabriel.