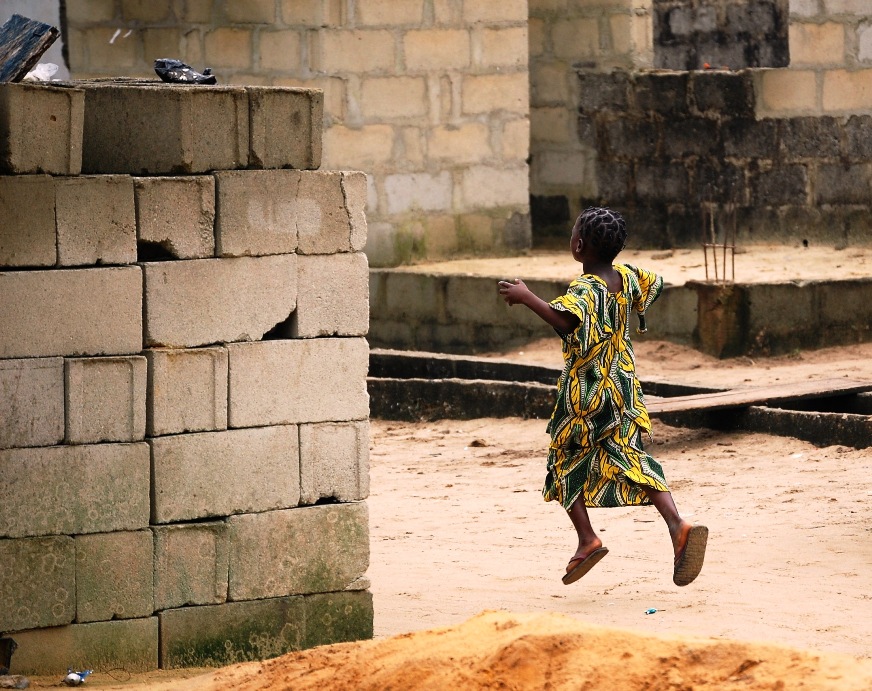 A little girl skips along through a construction site which has sat uncompleted for a couple years. Concrete blocks are still a very integral material for building houses in Nigeria. Houses can take years to complete based on the current financial situation of their owners.

The brutal abduction of 276 girls at a secondary school in the town of Chibok, Northeastern Nigeria, on April 14 by members of the armed group Boko Haram is only one piece of a larger problem. In Nigeria, 39% of girls are married off before the age of 18. An entire legal, cultural, religious and political system puts at risk not only the kidnapped girls, but thousands of other youth in Africa’s largest and most populous nation.

This reality has prompted local civil society organizations engaged in this issue to show that it neither begins nor ends with the kidnapping – as serious the kidnapping itself is. Today, 51 days since the episode, 57 girls have managed to escape. The rest remain incommunicado, while the government has promised military action of unpredictable consequences to rescue them.

Click here to read the interview with Osai Ojigho, deputy executive director of Alliances for Africa, on the # BringBackOurGirls campaign.

Conectas, Alliances for Africa, and Partnership for Justice alerted the Brazilian government to its potential role in this context. In October 2013, the three organizations addressed a joint letter to the Brazilian Foreign Ministry asking it to seize the opportunity presented by Nigeria’s second passage through the Universal Periodic Review mechanism of the United Nations Human Rights Council to make clear recommendations to the Nigerian Government. “Violence against women and girls, including rape, sexual assault, and domestic abuse, continue to be serious problems in Nigeria, and there is an urgent need for  Parliament to pass laws that address these issues,” the letter states.

“Section 55(1)(d) of the Penal Code, applicable in Northern Nigeria, provides that chastisement of a wife by her husband is not a crime, provided their native law and customs permit it and it does not cause grievous hurt,” explains lawyer, human rights defender, and deputy executive director of Alliances for Africa, Osai Ojigho, elaborating that “certain cultural and religious practices condone child marriage, FGM, and submissiveness in wives.”  Ms. Ojigho also touches upon Sharia Law in Northern Nigeria and how it “permits marriage of a girl who has attained puberty (usually between 9-16 years of age).”

Boko Haram’s kidnapping is related to the dire difficulties generally facing women and girls and “the vulnerability women and girls face in armed conflict”, affirms Ms. Ojigho, delving into how, despite the Nigerian Government’s ratification of numerous regional and international treaties aimed at promoting and protecting the rights of women and children, there is still much that needs to be done to improve the state of women’s and girls’ rights on the ground.

Nigeria, sometimes referred to as “The Giant of Africa”, is the continent’s #1 oil producer and also its most populous nation. Its vibrant and diverse population of 168 million hails from over 250 different ethnic groups. A regional heavyweight who plays an important leadership role in the Economic Community of West African States (ECOWAS), Nigeria hosted the World Economic Forum on Africa last month. Its economy has overtaken South Africa’s to become the largest in Africa, and economist Jim O’Neal recently included Nigeria in his newly-coined acronym MINT (Mexico, Indonesia, Nigeria, and Turkey).

Nigeria is not the only country affected by the Boko Haram Insurgency. The group, once contained within the country, has now taken on regional dimensions and expanded its bases to neighboring Cameroon and Niger.  At the recently-concluded Paris Summit meeting, hosted by French President Francois Hollande, and attended by Nigeria, its neighbors- Benin, Cameroon, Chad, along with former colonial powers France and the UK, the EU, and the US, African leaders agreed to declare war on Boko Haram. Nigerian President Goodluck Jonathan, who likened the group to the African equivalent of Al-Qaeda, claimed that over 12,000 people had been killed since the beginning of the insurgency in 2009, not to mention the countless injured.  There have been local and international reports that the Nigerian military may have also been responsible for perpetrating acts that could constitute crimes against humanity in its response to the insurgency, and “allegations of extra-judicial executions, torture, indeterminate incommunicado detention […] rape, various outrages against host communities and a pattern of disproportionate use of force.”  The ongoing conflict has prompted the ICC to open up a preliminary investigation into the situation.

On May 22, the United Nations Security Council (UNSC), which has been reluctant to address the issue more broadly, approved the addition of the organization to its list of entities subject to an arms embargo and targeted financial sanctions. Nigeria characterized its request to have Boko Haram added to the UNSC’s Al-Qaeda Sanction Committee’s list as “necessitated by a recent upsurge” in the group’s activities.

Boko Haram’s stated goal is to impose Sharia Law and turn Nigeria, which is roughly 50% Muslim, into an Islamic State. In 2009, Boko Haram took up arms and launched military operations in an attempt to overthrow the Nigerian Government.  Its founding leader, Islamist cleric Mohamed Yusuf, was killed in police custody that same year, leading the Nigerian Security Forces to claim that they had successfully done away with Boko Haram.  Since then, the group has stepped up its attacks, and the numerous incidents widely reported to have claimed more than 1,500 lives in the first four months of 2014 alone are part of the ongoing insurgency and conflict in northern Nigeria that prompted the Nigerian Government to declare a state of emergency in three Northeastern states in May of last year.

The tragic episode  of the schoolgirls’ kidnapping has sparked an avalanche of remarkable and unprecedented reactions from the local, regional, and international communities and debates on a range of issues from threats to regional and international security to the state of women and girl’s rights.  In addition to the campaigns that have been creating twittersphere frenzy, people have taken to other social media platforms and outlets to express their outrage over the abduction and solidarity with the girls, their families, and Nigeria.

Read the rest of the interview with Osai Ojigho to gain an inside perspective on the crisis, the state of women and girls rights in Nigeria, and the initiatives undertaken by local and international actors, including Alliances for Africa, to raise awareness of the plight of the abducted schoolgirls.

Also read the Sur Journal’s articles related to the topic:

The Rught to Education and Human Rights Education

Access to Justice and Human Rights Protection in Nigeria: Problems and Prospects