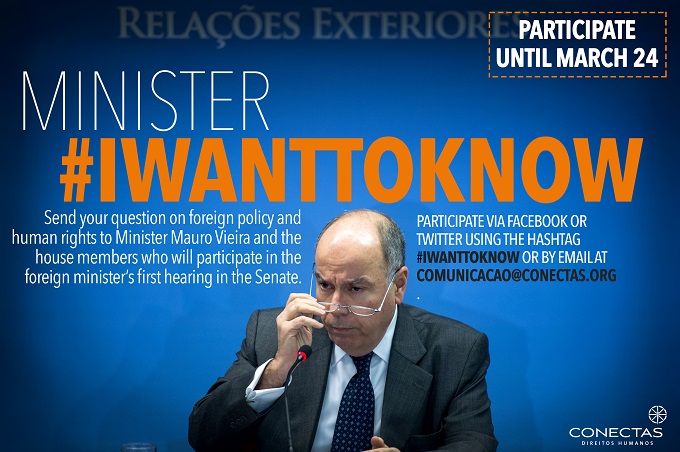 On March 26, Foreign Minister Mauro Vieira will appear in the Senate in his first hearing since he took office in January.

The traditional meeting of the Foreign Relations Commission, which is held at least once a year and always early in new tenures, allows the minister to talk about the role of the Foreign Ministry and answer questions from Senators.

Like it did with the last two foreign ministers, Antonio Patriota and Luiz Alberto Figueiredo, Conectas will deliver to the commission members, before the hearing, the questions on foreign policy and human rights submitted to the organization via Facebook, Twitter and email.

“The meeting with the foreign minister in the Senate is an important opportunity for society to question the direction taken by the Foreign Ministry and to provoke the Legislative into bringing more transparency to Brazilian foreign policy,” said Camila Asano, foreign policy coordinator at Conectas.

In his inaugural speech, the new minister said that “one guiding principle” for the Foreign Ministry will be to expand and consolidate the access of Brazil to all the world’s markets, while promoting and defending the Brazilian productive sector. However, he did not mention how this will be underpinned by respect for human rights, as the Brazilian Constitution determines. Neither did he address how to make the Ministry more transparent and responsive to society.

To participate in the 3rd edition of the “Minister, #IWantToKnow” campaign and send questions to the foreign minister, access Conectas’s profile on Facebook and leave your question in the comments section of the post. Alternatively, use the hashtag #IWantToKnow in your Twitter or Facebook account, or send an email to comunicacao@conectas.org. Questions will be received until March 24. The website of the TV Senado television network will broadcast the hearing.

In its first edition, organized in April 2013, the “Minister, #IWantToKnow” campaign collected questions for the then minister Antonio Patriota and exposed the lack of dialogue channels between the Foreign Ministry and civil society. The initiative was mentioned twice during the hearing, which ended with a pledge from the minister to improve transparency and participation.

In the hearing with former minister Luiz Alberto Figueiredo, in February 2014, of the five senators who took to the floor during the session, four mentioned the questions compiled and submitted by Conectas.