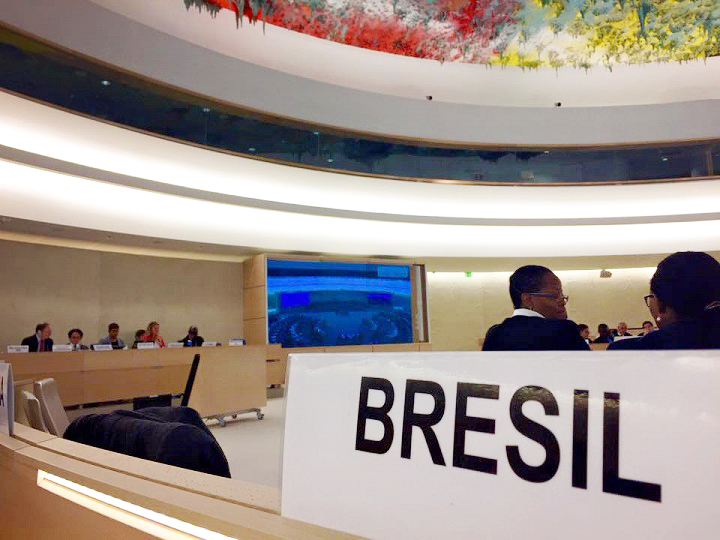 The actions of Brazil in the 28th Session of the HRC (Human Rights Council) of the UN, which ended this Friday, March 27, in Geneva, illustrate how the country still oscillates between a capacity for leadership in promoting the global human rights agenda and positions that cast doubts on the commitment of Brazilian foreign policy to the topic.

Brazil was one of the sponsors of the resolution determining that human rights bodies should participate actively in the global debate on drugs scheduled for 2016. This position was defended by several civil society organizations that view the UN General Assembly Special Session (UNGASS) on the world drug problem next year as key to changing how various countries deal with the issue.

“The resolution is an important step in the preparations for UNGASS 2016, the session that could lead to the adoption of a better global model for the drug problem. The current model is unsustainable, since it is perverse, inefficient and harmful to societies in numerous ways,” said Rafael Custódio, coordinator of Justice at Conectas. “In Brazil, for example, this prohibitionist drug policy serves as an instrument for the criminalization poverty, leading to the mass incarceration of the most vulnerable in society without providing any solution to the problem,” he added.

Also under the positive leadership of Brazil, a resolution was adopted by consensus that creates the mandate of a Special Rapporteur on the Right to Privacy, whose tasks will be to monitor, investigate and report on privacy issues and violations of this right around the world, including the challenges posed by the digital age and new technologies. This initiative is the most recent development prompted by an international debate on the topic that began with the revelations of Edward Snowden about the mass surveillance activities of the US National Security Agency.

“These relevant contributions of Brazil, however, contrast with positions that are not consistent with a country whose Constitution determines that there must be a prevalence of human rights in the handling of foreign policy,” said Camila Asano, coordinator of Foreign Policy at Conectas, when assessing Brazil’s participation in the session. “Serious violations in Brazil were denounced during the session of the HRC and the silence by the Brazilian government that followed is alarming,” she added.

Drawing on data from a recently published study, Conectas addressed the session, informing that, in the cases that were analyzed, public officials were held accountable for committing torture less often than private individuals and that torture is still commonly used as a method of police investigation. In addition, Conectas and Alliance for Water blamed the water crisis in São Paulo on decades of misguided water management and conservation policies, preventing the population of the region from being fully guaranteed the right to water.

With respect to slave labor, the organization also denounced, as a major setback, the injunction issued by the Supreme Court suspending the so-called “blacklist”. This initiative had prevented the extension of public credit and subsidies to companies found using slave labor. “We hope that the country will take a more constructive approach to charges submitted to international bodies and that it will not only commit internationally to ending these violations, but actually implement concrete measures on the national level,” said Asano.

The abstentions by Brazil in the voting on resolutions addressing the human rights situation in Iran and Syria are also cause for concern.

See Brazil’s justifications for the abstentions

In the case of Syria, the Brazilian government decided to not support the resolution that renewed the mandate of the Human Rights Council’s Commission of Inquiry, which is chaired by the Brazilian Paulo Sérgio Pinheiro and has been essential for documenting the human rights abuses and violations of international humanitarian law occurring in the country since the start of the conflict.

After supporting the adoption of a Human Rights Council resolution on human rights in Iran for four consecutive years, Brazil abstained in the vote this Friday. One of the purposes of the resolution was to renew the mandate of the special rapporteur for Iran, which is important to monitor what is actually happening in the country.

“The adopted text is similar to the previous ones that were supported by Brazil, even though the violations in Iran have not improved in any significant way that justifies this change in the Brazilian position,” criticized Asano.

“The human rights situation in Iran remains critical and today’s vote in Geneva reaffirmed this terrible situation. Nevertheless, Brazil’s abstention was still very disappointing. The Iranian government has not made sufficient improvements, nor has it cooperated with the Human Rights Council. The decision of the Brazilian government to abstain is not justifiable in view of the situation on the ground in Iran,” said Hadi Ghaemi, executive director of the International Campaign for Human Rights in Iran (ICHRI).

According to Mani Mostofi, director of the NGO Impact Iran, “Brazil has been a prominent voice in the Human Rights Council and it is therefore disappointing to see it silent before the serious violations verified in Iran. Moreover, Brazil’s explanation for its vote was quite confusing. Brazil recognized that the human rights situation is still bad. So why change its vote? One of the alleged reasons was the cooperation by Iran in the Universal Periodic Review (UPR). Iran, however, only ‘partially accepted’ the three recommendations made by Brazil, without offering any real indication about which aspects it agreed with and which it didn’t. What’s more, the Brazilian government knows full well that none of its recommendations made in the last UPR were implemented in Iran. The fact is that the United Nations needs an extra pair of eyes to monitor whether Iran’s UPR will bring about any real improvements to human rights. These are the eyes of the Special Rapporteur”.

The Brazilian abstention also drew criticisms from Shirin Ebadi, the Iranian winner of the Nobel Peace Prize. Ebadi said she was very happy to see that the mandate for Iran was renewed by the Human Rights Council. “This shows that the international community recognizes that, basically, there has been no real improvement in the situation in the country and that constant attention is needed. Still, many Iranian human rights defenders and I myself are surprised at the abstention by Brazil and the posture of silence on the subject, especially when Iran still holds hundreds of prisoners of conscience behind bars, religious minorities face systematic persecution, unions are suppressed and the authorities are preparing to expand discriminatory laws against women. Where is the strong leadership that President Dilma has shown in the past?” she asked.

The Nobel Peace laureate concluded by saying that “we hope that Dilma, as a female President, is paying attention to the situation of discrimination against women in Iran and she is aware that, in this country, by law, a man can have four wives, the legal testimony of two women is considered equal to that of one man and, if a woman tries to go to a gymnasium to watch a game of volleyball, as was the case with Ghonchen Ghavami, she can be arrested and fined”.

According to Camila Asano, “the justification given by Brazil to explain its abstention in Geneva is inadequate”. “A change of vote like this should be grounded in practical changes that have already been made and that have alleviated the suffering of the victims of the violations in Iran, and not just words and promises. The leadership of Brazil in promoting the international human rights agenda requires consistent positions that do not cast doubt on the role that human rights play in its foreign policy,” she added.

This was the first session of the HRC since the revelation of violations contained in the U.S. Senate report on the interrogation techniques used by the CIA (Central Intelligence Agency) during the “War on Terror”. On March 17, organizations from various countries asked the HRC to discuss the topic, while emphasizing that the report should be published in full and those responsible brought to justice.

In this session, the new Latin American member of the Working Group on Business and Human Rights was chosen. Conectas and partner organizations sent a letter with criteria for this selection to strengthen the independence, impartiality and legitimacy of the Working Group. They also submitted four questions to the candidates on potential conflicts of interest, their points of view on the topic and the measures that could be taken to improve the work of the Group.

Although the imminent execution of another Brazilian in Indonesia has occupied an important position on the Brazilian foreign agenda since the start of the year and has generated diplomatic tensions between the two countries, the case was not deemed worthy of a mention in a speech by the Brazilian ambassador on March 4. The speech was given at a panel on the death penalty.

Conectas also signed a letter requesting the establishment of an independent investigation to examine the serious and widespread human rights violations in Libya.