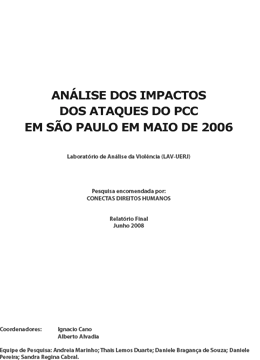 In May 2006, hundreds of civilians were killed in police actions and killed by extermination groups. The crisis of violence was a response to a series of rebellions in Sao Paulo prisons and attacks on public and police buildings commanded by the First Command of the Capital.

Held by the UERJ’s Laboratory of Violence Analysis at the request and in collaboration with Conectas, this study analyzed incident reports and expert reports of deaths caused by firearms from May 12 to 21, 2006 in the State of São Paulo. A total of 564 deaths and 110 injuries were analyzed. [Read in Portuguese]