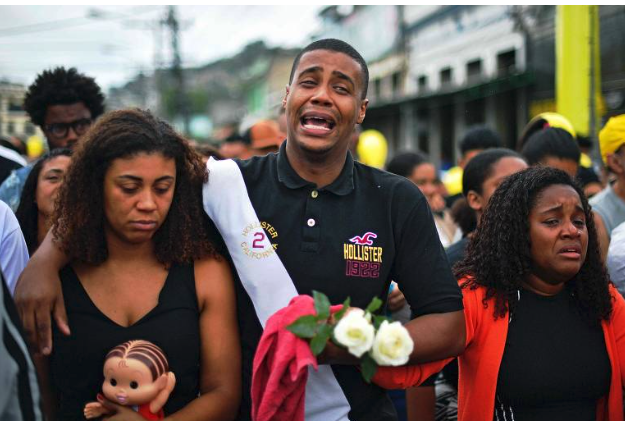 Conectas expresses its sympathy and solidarity with the family of the eight year old girl Ágatha Félix, killed on the night of Friday 20th, on her way home to Complexo do Alemão. Witnesses say the death was caused by a shot fired by a Rio de Janeiro military police officer.

Ágatha is yet another victim of an escalation in violence against the favelas and underprivileged areas of Rio, since the start of Wilson Witzel’s government. According to the Institute of Public Security in Rio, from January to August this year 1,259 people have been killed in interventions by agents of the state – 16% more than the same period last year.

The UN itself, has questioned the abusive use of force against poor communities in underprivileged regions of Rio de Janeiro, through its Rapporteur on Extrajudicial Executions. They stressed that the majority of the victims are young black people from favelas. According to the UN, if allegations are confirmed, the Rio governor could be violating articles of the International Convention on Civil and Political Rights, the Convention on Children’s Rights, the Universal Declaration of Human Rights and the American Convention on Human Rights.

In this climate the text known as the ‘Anticrime Package’ is extremely worrying. It was put together by the Bolsonaro government and has been submitted to the Chamber of Deputies. Among the changes proposed to fight crime is a provision known as “authorisation of otherwise illegal activity”, through which the concept of legitimate defence is altered in order to excuse police violence in advance and to exonerate officers from any possible accountability.

In the case of the death of Ágatha, as in the cases of other victims of police violence in Rio, we are expecting the investigation to be: free from the involvement of the internal affairs office of the police force;  accompanied by the Public Prosecutor’s Office, the Public Defender’s Office and the OAB/RJ (Rio de Janeiro Bar Association) and by representatives from civil society. We also expect the perpetrators of her execution, both actual and political, to be held accountable.