What’s it like to be a migrant in Brazil? 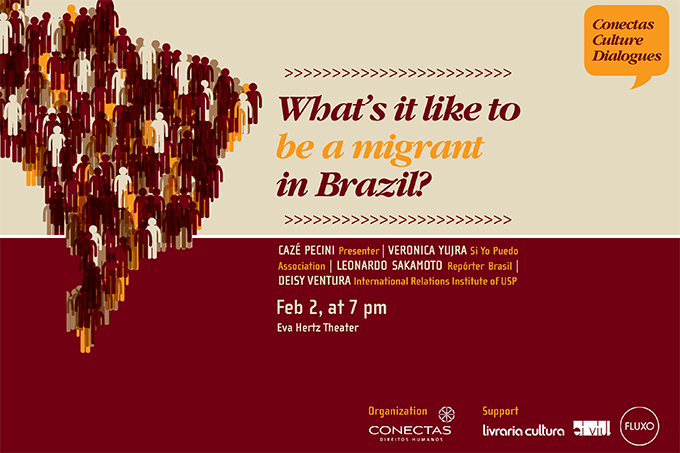 What are the main challenges faced by people who come to live in Brazil? Is there a big difference in the way people are treated, depending on the country they come from? How do migrants participate in the construction of Brazilian society?

The arrival of immigrants has increased in recent years but the laws that govern immigration are outdated. The Foreigner Act, a relic of the military dictatorship, does not reflect democratic values and needs to be modified. But to what extent would the existing proposals replace it? Do they represent any real progress? What is expected from the National Congress in 2015?

To discuss these questions, Conectas will stage next Monday, February 2, another edition of the Conectas Culture Dialogues on the topic: What’s it like to be a migrant in Brazil?

The debate will be attended by Deisy Ventura, a professor of International Law and postdoctoral Livre-Docente in International Relations from the University of São Paulo (USP), and an expert on immigration.

Also present on the panel will be Veronica Yujra, of the Si Yo Puedo (Yes, I Can) Association, which provides guidance to young immigrants, particularly Bolivians.

The other participants are Leonardo Sakamoto, a journalist and doctor in Political Science who serves on the Board of Trustees of the UN Fund on Contemporary Forms of Slavery and is also coordinator of the NGO Repórter Brasil, which specializes in combating slave labor, and Andres Ramírez, the representative in Brazil of the UNHCR (the UN Refugee Agency).

The presentation will be given by Cazé Pecini of the television show A Liga (The League), which airs on the TV Bandeirantes channel.

Entry is free, subject to space availability. The debate will be video streamed by Estúdio Fluxo and on the website of Conectas. Viewers may send questions, their own stories and reply to the question “What’s it like to be an immigrant in Brazil?” by email, Facebook or Twitter using the hashtags #EuMigrante (MeMigrant) and #DiálogosConectas (ConectasDialogue).