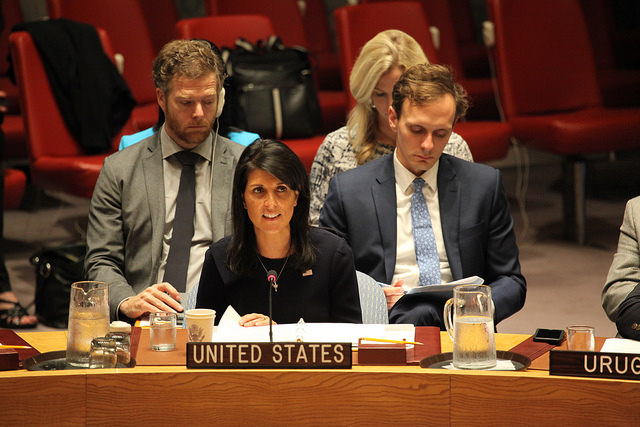 USA Ambassador for the UN, Nikki Haley, announces the country’s withdrawal from the Council.

With the justification that the UN Human Rights Council is “hypocritical” and has a long-standing “bias against Israel”, the American Secretary of State, Mike Pompeo and the country’s UN Ambassador, Nikki Haley, announced the United States’ withdrawal from the body. The statement came during the 38th session of the Council that will be meeting in Geneva until 6 July.

The decision comes at a time when the country is facing criticism for its zero tolerance policy on migration, which includes splitting up migrant families at the border with Mexico, classified by Zeid Ra’ad al-Hussein as ‘unconscionable’, on Monday 18 June. In May, the USA voted against a Council resolution to send international investigators to examine the violent reaction of Israeli security forces against Palestinians on the Gaza Strip.

“The United States’ withdrawal from the Council is regrettable, but not surprising. It is in line with previous decisions taken by the Trump administration, such as the country’s withdrawal from the Paris Agreement, in a strategy that goes against multilateral agreements to strengthen global policies that protect rights and combat violations and relapses. Even so, this withdrawal does not mean the end of the Council. It has functioned before without the USA as a member.” Explained Juana Kweitel, Executive Director at Conectas. “If one of the USA’s main demands was to fight a supposed bias, this discussion should happen within the Council and not outside it.” She added.