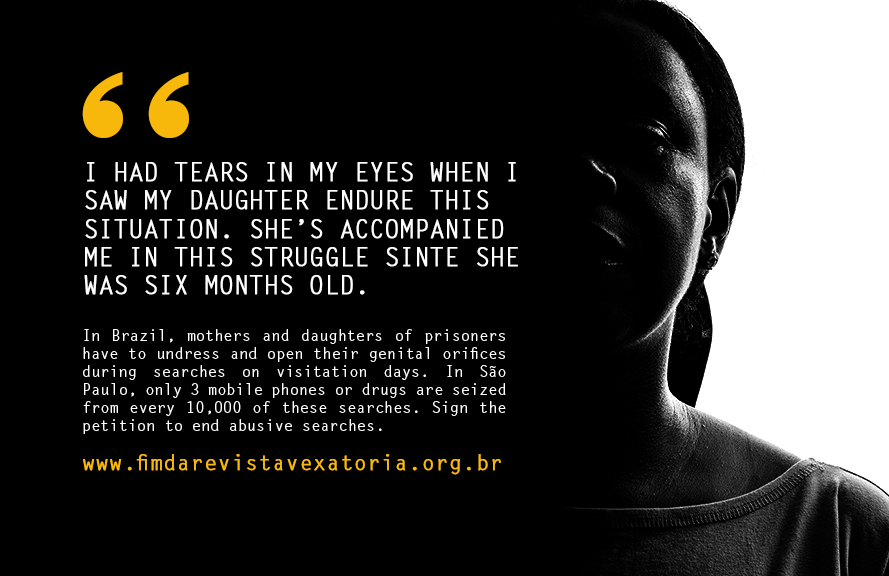 The Senate today unanimously approved Bill No. 480/2013 that bans “abusive searches” from being performed in Brazilian prisons. The approval comes 42 days after the start of a major national campaign launched by the Criminal Justice Network, of which Conectas is part, directed at the president of the Senate, Renan Calheiro.

The Senate Bill, drafted by Senator Ana Rita, was sponsored by Senator Humberto Costa. It will now proceed to the lower house of Congress, before being signed into law by the president.

“The pressure and participation by citizens makes all the difference. We need to redouble our efforts now to ensure that the bill is approved in the lower house, where the debate with more conservative elements, from the point of view of criminal law, could be tougher,” said Vivian Calderoni, a lawyer for the Justice Program at Conectas.

The abusive search is considered “mistreatment” by the United Nations and, depending on the circumstances, may constitute torture. Although it is already expressly banned in many countries and the State of Argentina was condemned in 1996 by the Inter-American Commission on Human Rights of the OAS (Organization of American States) for this very reason, Brazil continues to perform these searches.

As a result of this procedure, thousands of mothers, daughters, sisters and wives of prisoners are forced to strip naked, squat three times over a mirror, contract their muscles and open their anus and vagina with their fingers so employees of the State can perform the search. Infants, elderly women and women with reduced mobility are all submitted indiscriminately to the same procedure, often while receiving insults and threats.

In May, the procedure was banned in the metropolitan region of Recife by the 1st Prison Enforcement Court. In the ordinance, Judge Luiz Rocha mentioned data compiled by the Criminal Justice Network, which, based on official documents supplied by the São Paulo State Prison Administration Department, showed that only 0.03% of visitors were caught with contraband, i.e. 2 out of every 10,000 visitors. There were no cases of attempts to smuggle in weapons. The research used data gathered by the government in the months of February, March and April in the years 2010, 2011, 2012 and 2013. Meanwhile, the seizure of illegal items from inside the cells was four times higher than the amount seized from visitors, which proves that the contraband enters the prisons through means other than visiting relatives.

In May 2013, the Prison Enforcement Court of Joinville banned abusive searches at two prisons in the state of Santa Catarina. Official data demonstrate that, for the five months the ban was in place, there was no increase in the number of seizures that could be attributed to the end of this humiliating practice, much less any prison riots. On the contrary, the judge who made the ruling, João Marcos Buch, said the system “started to function more smoothly. Even the guards realized that the security dynamic did not change and that their workload was eased.” In spite of this, the ruling was overturned by the State Court, at the request of the State Public Prosecutor’s Office.