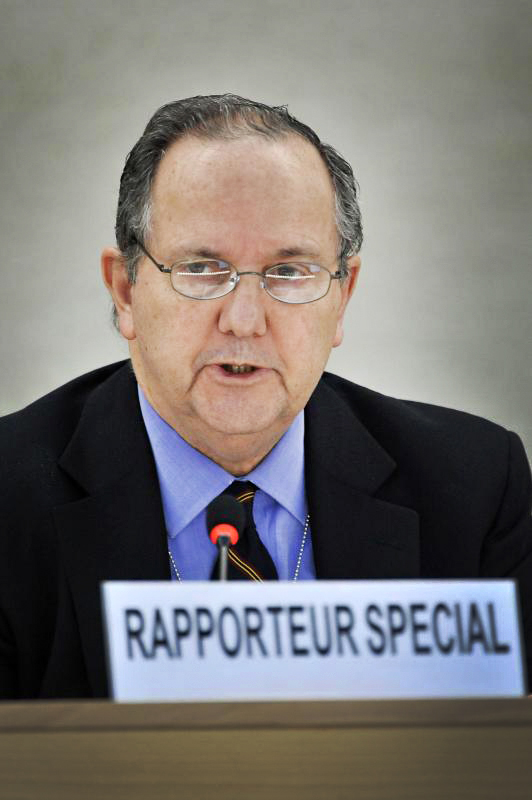 Juan Ernesto Mendez, Special Rapporteur on Torture and other cruel, inhuman or degrading treatment or punishment addresses during the 16th Session of the Council of Human Rights.

The Argentine Juan Mendez, UN special rapporteur on torture, has no difficulty defining the abusive searches performed on the relatives of prisoners in Brazil: making someone undress, squat several times and open their anus and vagina for inspection constitutes cruel, inhuman and degrading treatment – i.e. it breaches the Convention against Torture of 1984. In April, the Criminal Justice Network, of which Conectas is part, launched a national campaign to put a stop to abusive searches in Brazilian prisons.

Mendez, who was interviewed by Conectas during the 25th session of the UN Human Rights Council, in Geneva, explained that security requirements must be limited by respect for dignity. As an example of balance between security and human rights, he mentioned the experience in Uruguay, which has installed metal detectors at the entrance to its prison facilities. “The State has an obligation to use less invasive alternatives.”

In Brazil, a legislative bill banning the procedure has already been proposed. The bill, drafted by Senator Ana Rita, is currently pending in the Constitution and Justice Commission (CCJ) of the Senate and should be voted over the next few weeks.

The proposed legislation guarantees the integrity of the visiting relatives and allows prisoners to maintain their emotional ties to people in the outside world – which improves their chances of rehabilitation. According to Mendez, it is common today for prisoners to ask their families not to visit, to save them the humiliation. “This has a direct impact on the fundamental rights of prisoners,” he said.

Read the full interview below.

1. How does the UN view these abusive searches?

As UN rapporteur, my view is that the abusive searches come under the prohibition of cruel, inhuman and degrading treatment. Any action by the State that humiliates a person is a violation of this prohibition. The Committee on Prevention of Torture and the Subcommittee on Prevention of Torture have anecdotal, but very consistent, information on the humiliations endured primarily by female visitors to prison facilities. The prisoners themselves also face these searches. It is, therefore, a sufficiently widespread procedure to raise our concern.

Nevertheless, the applicable standards – besides the generic rule I mentioned earlier – are not very specific. We are currently in a process of reviewing the Standard Minimum Rules for the Treatment of Prisoners and it seems to me like a good opportunity for a discussion between States and civil society over how to perform these searches. Obviously we recognize that the authorities need to maintain order inside prisons, but there ought to be a balance between this need and the dignity of the inmates and the relatives who visit them. But we still don’t have a clear standard for how to achieve this balance.

2. Do you know of any countries that have managed to strike this balance between security and respect for human dignity?

Yes. In Uruguay, for example, they showed me a metal detector – an improvement, at least, from manual searches. But even a metal detector has to be well thought out, since the more modern ones need a person manning the screen who can observe the nudity by x-ray. Even this needs to have certain guarantees for respecting people’s dignity.

In the meantime, the existing jurisprudence states that if less invasive and demeaning alternatives are available, then the State is required to use them. They cannot say they do not have the money or that the detector is not working. They have the obligation to provide it. On the other hand, I also acknowledge that metal detectors only help up to a certain point, since they do not identify drugs that can be smuggled into prisons. We need to consider other ways of finding this balance between security and the two standards that we have to date: first, the inviolability of people’s dignity and, second, the obligation of the State to use less invasive alternatives.

3. What is the impact of the abusive search on prisoners?

The abusive search has a direct impact on the fundamental right of prisoners to family visits. Whenever we make inspections, we ask about the frequency of the visits, the places where they are held, whether young children are permitted. Sometimes we complain, for example, about the presence of the guards and the lack of privacy, but we’ve never asked about what happens before or afterwards. We meet with people who say “I don’t want my relatives to come”, or with visitors who tell us they want to visit an imprisoned relative, but say the process is always too traumatic. They have to make the trip, wait in long lines and then endure a humiliating search. Unfortunately, the requirement for women to be searched by female guards has not been sufficient to resolve the problem. The procedure can be very demeaning, even when performed by other women.