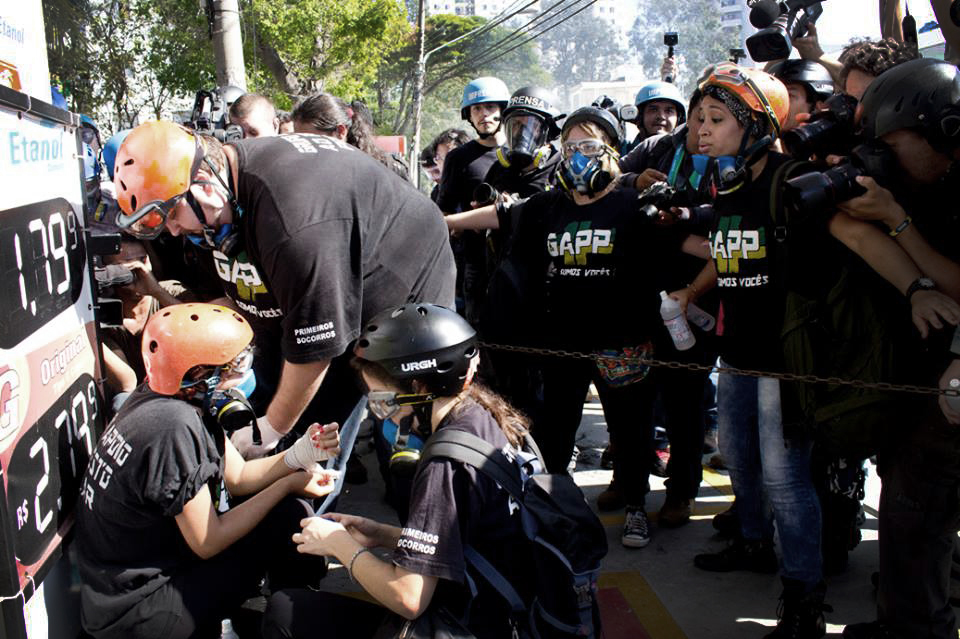 São Paulo Governor Geraldo Alckmin today signed the bill approved by the state legislature on July 4 that limits the right to demonstration. The bill, drafted by state lawmaker Campos Machado, bans the use of masks at protests and requires prior notice to be given to both the Military Police and the Civil Police. It also makes it illegal to be in possession of objects that could be considered “weapons” by the police.

The move by Alckmin, who has promised a swift implementation of the law, contrasts with the lack of any progress by his government investigating the military police officers involved in abuses and violations during the protests. Since the protests began in June 2013, not a single officer has been charged, despite the enormous amount of recorded evidence presented to the Internal Affairs Office.

“The signing of the bill is an example of one of the most serious contradictions of the State: that it acts with extreme efficiency to repress and suppress rights, but it is incapable of admitting or investigating its own violations,” said Rafael Custódio, coordinator of the Justice program at Conectas. According to Camila Marques, a lawyer for the Legal Reference Center of the non-governmental organization Article 19, “it is regrettable that a decision of this magnitude, that directly affects constitutional freedoms and guarantees, is being passed without any debate, and for the exclusive purpose of curtailing freedom of expression”.

As far as Conectas and Article 19 are concerned, the bill signed by Alckmin is unconstitutional since it restricts the right to protest that is protected in article 5 of the Constitution of 1988.

The use of masks is part of people’s right of personality and freedom of expression and does not prevent demonstrators from identifying themselves to the authorities. Moreover, activists and professionals are known to use masks and helmets to counter the effects of less-lethal weapons – so frequently used illegally and disproportionately by the police, as seen at the demonstrations on July 2, June 12 and May 15, 2014.

“Besides the unconstitutionality of the law, we need to consider the people who use masks only when necessary, to protect themselves from tear gas – such is the case with our first aid volunteers,” said Alexandre Morgado, a volunteer for GAPP (Popular Protest Support Group), which provides assistance to the wounded during demonstrations. “On numerous occasions, this gas has been fired for no reason, in closed off areas or while we are tending to a victim. In these cases, the mask is our only protection. So far, we have already assisted more than 90 victims at demonstrations and tear gas has been a part of the scenario on the vast majority of occasions.”

The provision against the use of masks also reveals that the State views demonstrators as potential criminals. The police forces, meanwhile, will now have more power to arrest activists – which will encourage the illegal practice of arrest for verification already widely condemned by human rights organizations and social movements.

The ban on carrying objects that could be considered weapons is also sensitive, since the bill is not clear and specific, paving the way for arbitrary action by the authorities. The bill refers to “other [objects] that could harm people and damage public or private property”. It is worth remembering that the bearing of arms is already regulated by federal legislation.

The requirement for prior notice is also the subject of criticism, even though it is permitted by the Constitution. There are concerns that it will be used by the police to curtail the right to protest, just like what happened at a peaceful demonstration held in July this year at Roosevelt square.

The organizations are considering the possibility of filing a Declaratory Action of Unconstitutionality against the new law.

Similar bills to the one signed today in São Paulo are also pending in the federal legislature and in other states. In May, Conectas, Article 19 and partners submitted a technical opinion to members of the federal Congress criticizing Bill 508/2013, which increases penalties for crimes committed at protests when offenders are wearing masks.