Torture in the United States 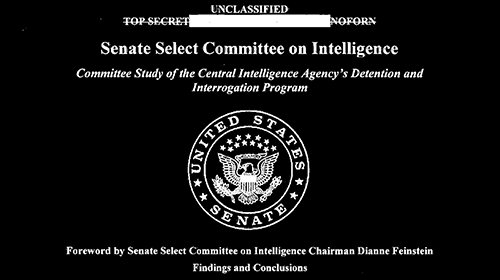 The release, on December 9, of the U.S. Senate report on the use of torture by the CIA (Central Intelligence Agency) has reignited the debate on the illegalities committed by the US government over the course of the so-called War on Terror. Now that the dust has settled, the greatest challenge is still to try and hold the authorities involved accountable and make reparations to the victims.

On Monday, December 22, two US-based human rights organizations, the ACLU (American Civil Liberties Union) and Human Rights Watch, sent a new request to the US Attorney General Eric Holder for the appointment of a special prosecutor to investigate the violations of prisoners in CIA custody since the attacks of September 11, 2001.

Meanwhile, given the political obstacles to pursuing legal action in the United States to date, another alternative has been to file criminal complaints in international forums and foreign courts – which is possible on account of the universal nature of war crimes and crimes against humanity, such as torture. Cases have already been opened against senior officials from the George W. Bush administration in Spain, France and Germany. On December 17, a new case was filed in Germany against the former CIA director George Tenet, former defense secretary Donald Rumsfeld and other members of the administration.

The role of Brazil

In addition to receiving cases in their courts, other countries can be more active in the fight against torture and other crimes committed in the post-9/11 context. Brazil, for example, has some opportunities to make a positive contribution in the near future: in January, the US vice president Joe Biden will make an official visit to the country and the subject could be included on the bilateral agenda. The Brazilian government could also be part of the effort to close the Guantanamo Bay detention camp, by publicly declaring its availability to receive people unlawfully detained there – a humanitarian gesture offered by Uruguay earlier this month.

“In democratic times, a State that distorts the guarantees of international law for purposes of national security introduces more insecurity to the world. And on this point, Brazil cannot be collusive,” said Camila Asano, coordinator of the Foreign Policy program at Conectas.

Brazil can do even more: one example is to take advantage of the passage of the United States through the UN Universal Periodic Review, in May 2015, and make concrete recommendations for the country to open an independent investigation into the abuses committed by the CIA.

Conectas – What was the role of the civil society movement in the decision of the US Senate to investigate torture in the so called War on Terror?

Jamil Dakwar – Civil society organizations have played a major role in demanding accountability for torture. The ACLU participated in a coalition of human rights organizations that lobbied members of the Senate Select Committee on Intelligence (SSCI) to support adoption and declassification of the report. As part of that coalition, the ACLU encouraged its 500,000 members nationwide, who often help us pressure policymakers on particular actions by signing onto petitions and emailing government officials, to contact members of the Committee and urge them to release the report. We also encouraged our members to write to the President to ask him not to allow the CIA to take the lead in the declassification process and make the process as transparent and unbiased as possible.

What are your and other Human Rights organizations planning to do next on the subject?

The ACLU’s blueprint for accountability following the release of the SSCI report involves advocating for the appointment of a special prosecutor to conduct an independent and complete investigation of Bush administration officials who partook in the torture program; pushing for significant CIA reform by prohibiting the CIA from operating any detention facility and ensuring that the CIA is subjected to the same interrogation rules as the U.S. military; acknowledgment and formal apologies to victims of torture, in addition to compensation and rehabilitation services required by international human rights law;  recognition of the courageous efforts of U.S. service members who objected to torture;  and finally, full disclosure and release of all 6,700 pages of the report.

President Barack Obama has said repeatedly that he does not intend to open investigations into the use of torture by the CIA and that the country “should look forwards not backwards”. What does this tacit pardon mean to you?

The ACLU believes that the publication of the Senate report should be the start, not the end of any process. The report should spur President Obama and Congress to act, guaranteeing that torture is never used again. We prefer legal action to pardons and we are asking the Attorney General to appoint a special prosecutor to hold the architects and operators accountable for having devised, implemented and covered up the torture program.

International pressure could make any difference in the way the American government makes decisions that could lead to human rights violations?

Yes, we believe international pressure could certainly make a difference in the way the U.S. government addresses human rights violations in the future. The U.S. prides itself as a human rights champion; it is crucial for the Obama administration and U.S. Congress to show how torture undermined that title. Since 2004, we have brought this issue up to the international community by appealing to various United Nations human rights bodies including the UN  Human Rights Council, the UN Committee Against Torture, the UN Committee on the Elimination of Racial Discrimination, through the Universal Periodic Review process, and UN Special Rapporteurs.