Together against lowering the age of criminal responsibility 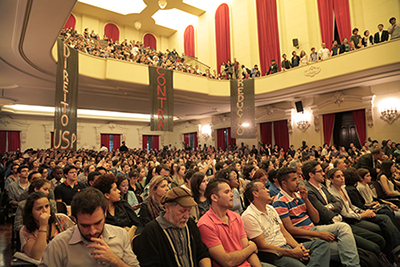 More than a thousand people and at least 60 organizations, groups and movements took part in the event

The Grand Hall of the University of São Paulo Law School was too small to accommodate the thousand or so people who came to attend the event on April 28 against Constitutional Amendment 171/1993, which would lower the age of criminal responsibility from 18 to 16. In the doorways, the corridors and on the floor, the public gathered to see and hear talks by former ministers, social leaders, academics, jurists and human rights defenders against the proposed amendment that is pending in the lower house of Congress.

The event was organized by several organizations, namely the Brazilian Criminal Sciences Institute, Conectas, the August XI Academic Center, the São Paulo Public Defender’s Office Ombudsman, the São Paulo Regional Council of Psychology and the Association of Judges for Democracy.

The diversity of the voices demonstrated the extent of the opposition to the amendment. Among those present at the event were two former ministers of justice from the administration of President Fernando Henrique Cardoso, Miguel Reale Jr. and José Carlos Dias; the São Paulo State Attorney General, Márcio Fernando Elias Rosa; the president of the São Paulo State Court, José Renato Nalini; the state’s chief public defender, Rafael Vernaschi; and the president of the Fundação Casa youth reform center, Berenice Giannella.

More than 60 organizations and social movements also participated, such as the Mothers of May Movement, Educafro, the Homeless Workers Movement and the CUT trade union federation. Also serving on the panel, chaired by Professor Salomão Shecaira of the University of São Paulo Law School, were former senator Eduardo Suplicy and former minister Paulo Sergio Pinheiro.

In the talks, different views of the problems and impacts of the amendment conveyed a single message: the proposal must not be approved by lawmakers. According to Miguel Reale Jr., the reintroduction of the proposal by the current president of the lower house, Congressman Eduardo Cunha, is directly related to the growing unpopularity of Congress. “It was done to please the masses, establishing a major fraud,” he said. “The amendment is intended to mislead the people. But we won’t be deceived, we’ll denounce the fraud.”

Others also argued that the proposal is unconstitutional, challenging the decision of the Constitution and Justice Commission of the lower house, which approved the admissibility of the amendment in March. “It is unconstitutional both from a formal point of view and in terms of content, since it presents the image of a vindictive State, which is incompatible with the democratic rule of law,” explained Márcio Elias Rosa. “Moreover, it will not reduce violence because violence is not associated with age.”

For Débora Silva, founder of the Mothers of May Movement, the debate surrounding the proposal overlooks a much larger problem, which is the violence suffered by the country’s poor, black youth. “Brazil should not be discussing lowering the age of criminal responsibility, but instead the veiled killings in the poor outskirts of our cities.” This viewpoint was echoed by Gabriel Medina, Brazil’s national youth secretary. “Young people are not the perpetrators of violence, but its main victims,” he said.

“It is not by throwing our young people into the prison system that we will reduce violence in our country. It’s worth remembering that Brazil loses only to Nigeria in the number of killings of young people,” said Flávia Piovesan, a professor at the Catholic University of São Paulo (PUC-SP). “Breaking with the culture of trivializing death requires a break with the trivialization of the life of our young people.”

During the event, the former minister José Carlos Dias read a statement that will be delivered to lawmakers calling for the rejection of the amendment.

See below the video about the event: