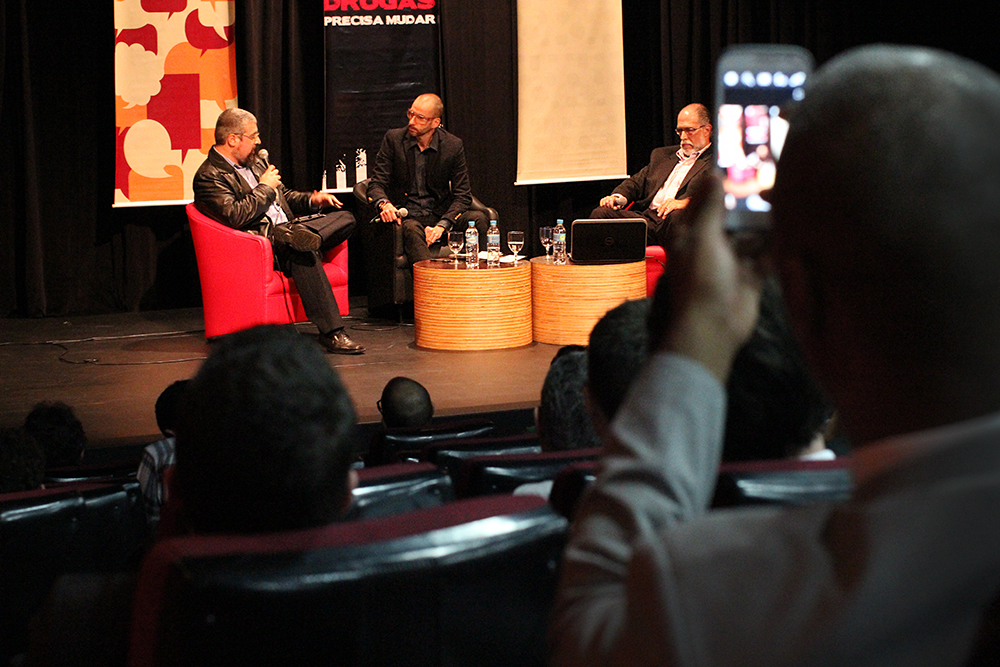 Overcrowded prisons, control of vulnerable groups, families destroyed, addicts without access to treatment, limited research, violence. Despite the obvious and numerous failures of the current policy on drugs, very little has been done to change the criminalization approach. Instead, running counter to an international movement that is increasingly more open to alternatives, Brazilian authorities have resisted reviewing the Drug Law, insisting on a response that is far more harmful than the problem itself.
This was one of the conclusions of the debate between Judge José Henrique Torres and the psychiatrist Luis Fernando Tófoli. The discussion, mediated by the television presenter Cazé Pecini, was attended by more than 130 people at the Livraria Cultura bookstore, in São Paulo. Dozens of people also watched the debate on Estúdio Fluxo, which broadcast the event live on the internet.

“The United States spent 30 billion dollars, Brazil arrested hundreds of thousands of people, and what did we get? Absolutely nothing, apart from an increase in trafficking and consumption,” said Torres. “Today, the criminalization is worse than the drugs themselves.”

The judge’s indignation with the current Drug Law is apparent from his choice of words: on at least two occasions, Torres described article 28 of the law as unconstitutional – ahead of an upcoming debate in the Supreme Court. The article in question criminalizes anyone who “purchases, stores, transports or possesses, for personal consumption, drugs without authorization”.

In practice, said Torres, the law widens the differences in the treatment of whites and blacks, rich and poor – the former, always classified as users, and the latter, as dealers. It also violates the harm principle, according to which there can be no crime without a victim. And finally, the judge also claimed that the article violates the principle of equality, since it calls for different treatment for users of legal and illegal drugs, and the principle of rationality, since it creates worse problems than those it claims to combat.

“We need to stop buying into the myth of crime,” he said. “People have been led to believe that criminalization solves problems. We forget that crime is a product of the law, which is used by the State as a powerful weapon to exercise control over certain segments of the population.”

Unlike Torres, who defended the same treatment, under the law, for all types of drugs, Luís Fernando Tófoli called for public health policies that take into account the differences between substances, individuals and consumption contexts.

“The status of drugs in societies is determined by economic and cultural factors. There are different scenarios of use. Cocaine, for example, is inhaled by people from higher social classes while crack cocaine is smoked mostly by the poor,” he said, explaining that these specifics need to be taken into account when drafting public policy. He mentioned, as an example, the positive experience in Portugal, where decriminalization has been accompanied by an improved access to health.

Initiatives like this, said Tófoli, stand in stark contrast with one-size-fits-all approaches, such as compulsory internment and rehabilitation. “Rehabilitation is only one way to deal with problematic consumption. We have to think about more pragmatic alternatives. This is what we call harm reduction policy,” he said.

The psychiatrist also criticized incarceration as a response to the problem. Between 2005 and 2012, the number of people arrested on drug charges increased 320%. Today, according to data from the Ministry of Justice, 42% of the women and 24% of the men in prison are there for drug crimes. Nine years ago, these figures stood at 24% and 10%, respectively.

“One of the side effects of this policy is the increase of criminal gang activity and the deterioration of the already problematic conditions inside our prisons. Not to mention the destruction of people from a mental health perspective. By using an illegal substance, shrouded in prejudice and stigma, people put off seeking help and treatment is delayed.” While the drug policy has failed to reduce consumption and violence, he said, it has been very successful in controlling entire populations through fear.

Watch the debate in full (in Portuguese):