The women protectors of Brazil’s quilombos

On International Women’s Day, we tell the story of how a group of women guaranteed in the Supreme Court a plan to combat Covid-19 and assistance for all the quilombola communities in the country 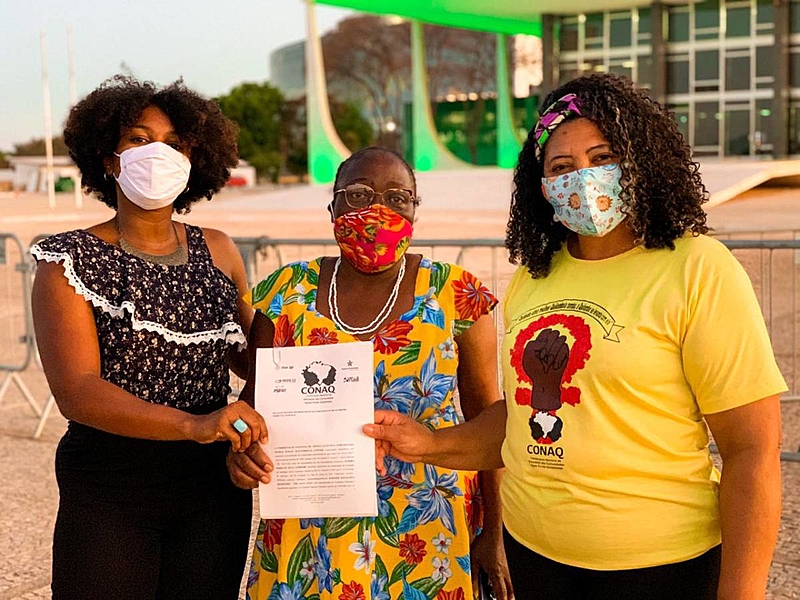 The memory of her great-great-grandfather, who was born and raised in the Kalunga do Vão do Moleque quilombo in the state of Goiás, was fresh in the mind of the lawyer and researcher Vercilene Francisco Dias, aged 30, when the justices of the Supreme Court, by nine votes to two, guaranteed emergency care during the pandemic for all the quilombola communities in Brazil, among other requests. Families like hers, spread across 6,300 quilombos in the country, with no electricity or running water in their homes, are finally being assisted thanks to the efforts of women like her, the protagonists of this historic case: the first drafted by a quilombola organization. “We broke the silence with the help of those who came before us.”

Like the novel “Torto Arado” (Crooked Plow), by Itamar Vieira Junior, winner of the Jabuti award, life in Brazil’s quilombola communities in the 21st century resembles the bygone days of slavery, of forgotten black stories, of denied rights, of suffering that runs through the veins and the land that grew from the work and resistance of the families – and under which the vast majority do not have their rights guaranteed. Against a national backdrop of extreme vulnerability, the novel coronavirus “accentuated what was already bad”, in the words of Selma Dealdina, aged 39. Selma, who was born telling stories of combating racism and fighting for land in the Angelim 3 quilombo in the state of Espírito Santo, is now executive secretary of Conaq (National Coordination of Quilombola Communities).

After the first case of Covid-19 was confirmed in Rio de Janeiro and the World Health Organization declared a pandemic, Conaq started to receive requests for help from across the country. It was hunger, which affected three out of four Brazilian quilombola communities. It was lack of water even for hand washing in nine out of ten homes; and lack of basic sanitation, which exists in only 2% of homes. It was isolation for those who already live isolated in the bush, kilometers from the nearest health center – 67% of people who depend exclusively on the public health system are black.

With no real response from the federal government and in the absence of a national public policy to tackle Covid-19, Selma, Vercilene, an alliance of women and the members of the Joãozinho de Mangal legal advisory group, of Conaq, began to discuss how to guarantee the survival of quilombola communities, a right provided for in the Brazilian Constitution. In July 2020, the federal government passed Law 14,021, which is intended to protect indigenous and quilombola communities during the pandemic, but it did not guarantee access to drinking water, hygiene materials, hospital beds and mechanical ventilators. “At this point it became clear that the neglect of quilombola communities would continue. But it is important to note the other vetoes, at different times, such as the one that hindered access by quilombola residents to emergency income support,” said Maira Moreira, aged 30, a quilombo researcher and black lawyer from the organization Terra de Direitos.

There was no other option than to take legal action.

The individual achievement of the many women who drafted the document collectively was not enough. In the past, they would have met up in person to discuss what to do with other leaders, but in the pandemic they had to contend with the distance and the lack of WiFi networks to work together. “We don’t sit in our offices, talking and writing about everything, we build the movement together. It is an eminently collective and shared effort, which is why it works,” said Layza Queiroz Santos, a lawyer from the Margarida Alves Grassroots Legal Aid group, in the state of Minas Gerais, one of the organizations that helped draw up the case.

On this year’s International Women’s Day, Layza recalls how becoming a lawyer is a much longer and harder path for women – especially for black women and women from other groups. “Seeing so many women protagonists in this case reinforces the importance of collective work and of female participation in a very difficult area such as the law,” she said.

They then addressed the lack of data on quilombola communities in the country to demonstrate the vulnerability that has always existed, but is not recorded in the statistics. “This made production very difficult. The government removed what little public information existed,” said Joice Bonfim, a grassroots lawyer and coordinator of the Association of Lawyers of Rural Workers in the State of Bahia. Many statistics were produced by cross-referencing new data in the early months of the pandemic.

Luiza Viana Araújo, one of the group of women and a member of ECAM (Team for the Conservation of the Amazon) remembers emotionally the first results arriving at meetings that lasted into the early hours. There was no doubt: the need for assistance was apparent in the statistics, which portrayed a people who have never been a priority. “We learnt and grew collectively, by listening to one another, by understanding each other in so many ways and by encouraging each other. It was very challenging, especially for the leaders in the defense of their people,” she said, her voice breaking.

Vercilene and Maira drafted the first version of what would eventually become, after changing many hands, ADPF Case (Allegation of Violation of a Fundamental Precept) No. 742, of September 9, 2020, the first such case ever drafted by a quilombo organization, Conaq, and filed by the political parties PSB, PSOL, PCdoB, REDE and PT.

The case requested a plan for the survival of a people: combat the effects of the pandemic, personal protective equipment, availability of hospital beds, distribution of food staples and the right to drinking water that the government had previously denied. On the list of emergency requests, they included the right to not be evicted during the pandemic. Of the more than 6,000 communities, only 124 have been certified by Incra (National Land Reform Agency) and 183 by state government bodies. Since the start of the Bolsonaro government, no land at all has been demarcated.

On that day, September 9, a small group of quilombola residents, mostly female, registered the presentation of the case in Brasília, in front of the Federal Supreme Court, which would decide whether or not thousands of people would disappear. Vercilene relived the isolation from her family and community. She lived with her godparents for most of her childhood because there wasn’t enough food at her father’s house. “I spent so much time away from home that we got stronger to resist everything.” But it was important for the movement for black people to be present, including leaders and lawyers. “It was an experience of loneliness, given there could have been a sea of people. Where are the people? Where are our people? But we were there for them, with them, handing over our lives and our dreams to the Supreme Court, the guardian of the Constitution,” said Selma, of Conaq.

Conectas was accepted as an amicus curiae (friend of the court) in the case together with other organizations, namely ISA (Socioenvironmental Institute), Educafro, the Human Rights Clinic of UERJ (Rio de Janeiro State University), Terra de Direitos, IARA (Racial and Environmental Advocacy Institute), the National Federation of Quilombola Associations and the Federal Public Defender’s Office. The quilombola lawyer Gabriele Souza, aged 32, of the organization Terra de Direitos, felt her father and grandfather by her side when she participated in the oral statement. “I felt very privileged for the opportunity to continue the struggle of my ancestors in this pursuit for access to our rights.”

Despite the urgency imposed by the pandemic, or because of it, the court’s response came five months later, in February of this year. Nearly a thousand quilombola residents had succumbed to Covid-19. By 9 votes to 2, the Supreme Court ruled in favor of the quilombola women and communities across the country. “In this context of attacks against democratic institutions, this case helped change Brazilian jurisprudence by allowing organizations to access the Supreme Court, by qualifying Conaq and paving the way for future struggles,” said Letícia Osorio, a lawyer at the Fundamental Rights Clinic of UERJ (Rio de Janeiro State University).