The state of protests 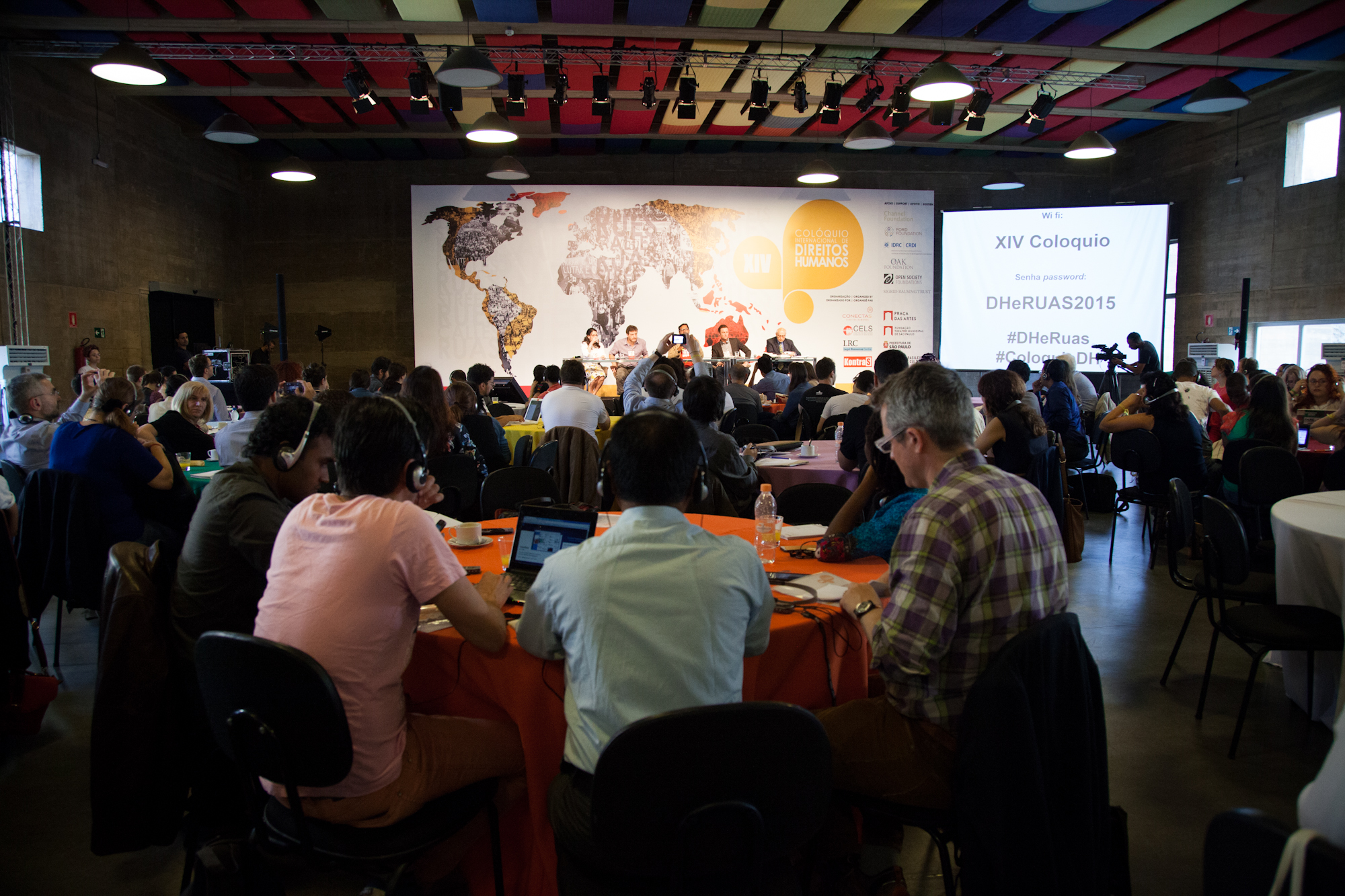 The agenda and the demonstrations that have filled the streets in various countries in recent years all had at least one thing in common: the repressive response by the State. “It occurs in varying degrees of violence, depending on the country, but there is a very clear trend of States militarizing police forces to deal with their own populations,” said the journalist Bruno Torturra, of Estúdio Fluxo, moderator of the first panel of the 14th International Human Rights Colloquium.

Under the topic “Protests: actors, formats and the responses of the State”, the panel was formed by the Egyptian Karim Ennarah, a researcher for the EIPR (Egyptian Initiative for Personal Rights); Nurcan Kaya, who participated actively in the Gezi Park protests in Turkey; the Mexican public defender Maria Lucia Aguilar, from the Tlachinollan Human Rights Center; and Jamil Dakwar of the ACLU (American Civil Liberties Union).

The panel also heard the story of Gerardo Torres Perez, a student from the Raúl Isidro Burgos Rural College of Ayotzinapa, in Mexico. In September 2014, 43 of Gerardo’s colleagues were disappeared after a confrontation with the police. The American activist Phillip Agnew, from the Black Lives Matter movement, participated in the event by video conference. The stories added real-world credence to the broader debate on the state of protests around the world.

According to Dakwar, although the demands are diverse, there is one common central theme behind all the voices that have taken to the streets in recent years: economic injustice. “The system works against the people,” he said. In August 2014, the U.S. city of Ferguson was the stage of protests calling for the indictment of the police officer Darren Wilson for the murder of the young black man Michael Brown. This year, Freddie Gray, a 25-year-old black man, died seven day after being detained by the police. According to Agnew, the demonstrations are not just a consequence of specific episodes of police violence, “but of years of unemployment and lack of opportunities.” “On the streets, the police are authorized to act above the law – and there has been no accountability for this,” explained Agnew.

The lack of accountability for abuses is another constant from the United States to Turkey. Although the protests originally against the planned redevelopment of Gezi Park, in Istanbul, led nearly 3.5 million people to the streets in 79 of the country’s 81 provinces, Nurcan Kaya claims that many police officers involved in the abuses were not even identified. In Turkey’s case, the lack of investigations into the actions of the police is inversely proportional to the criminalization of the protest movements and demonstrators. During the protests, 4,900 people were officially detained, 88 users of social network such as Facebook and Twitter were investigated and 88 people were wounded. In all, 11 people were blinded and 104 suffered head trauma. “The government is still very afraid of us,” said Kaya.

Director of the ACLU’s Human Rights Program, Dakwar also mentioned the failure to record data as a serious problem in the investigation of abuses. “There is no data collection. The figures you see in the media are guesses. The investigations are very limited on the state level and even more so on the federal level.”

The lack of commitment by the State to the investigations is a reality in Mexico, where nearly 26,000 people are disappeared and only 7% of the crimes are investigated. “Forty-three of our companions were disappeared by the State and so far no one is guilty,” said Gerardo Torres, who told the story of the attack against his colleagues on the evening of September 26. “Mexico’s security policy is based on militarization, not on intelligence. There is no strategy,” said Maria Lucia Aguilar.

“All governments tend to view demonstrations with fear and as disturbances,” explained Ennarah. His statement is based on the hundreds of accounts compiled in the report Take Back the Streets, published by the INCLO (International Network of Civil Liberties Organizations). One of them is the repression, by U.S. police officers, of the protest in Porto Rico. “They sprayed tear gas from helicopters,” he said. Another example of how less-lethal weapons can become lethal occurred in Egypt: “the security forces fired tear gas canisters against demonstrators for six straight days.”

According to Torturra, overcoming this mistaken form of dealing with social protest includes reviewing the idea of social participation and understanding the legitimate agendas that emerge from the streets. “Twentieth century democracy has not been able to cope with the demands of the 21st century. The agendas of these movements, unlike what the media or governments claim, are not diffuse. They are diverse. It’s not the movements that don’t know what they want, but the media and the State that can’t give an adequate response to what these movements demand.”

This article was written by Milena Buarque and is part of the collaborative coverage of the 14th Colloquium.