The State of pain 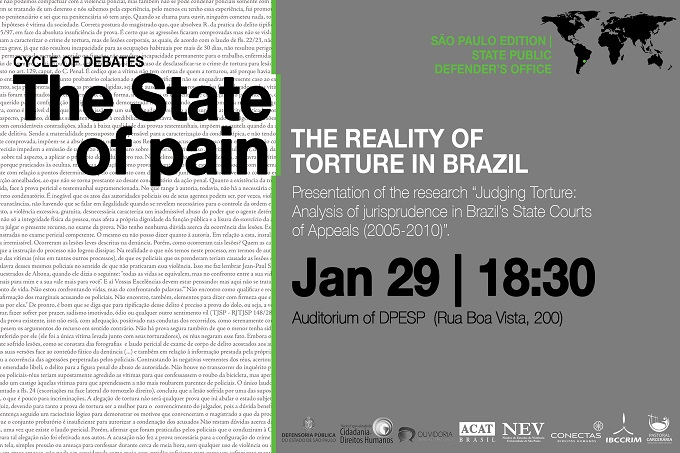 Why are public officials more likely to be acquitted in torture cases? Why, despite the legal ban, is torture still commonly used to obtain evidence? What is the profile of the perpetrators? Who are their preferred victims? What is the role of the Judiciary in combating this practice?

An international cycle of debates, organized in the wake of the release of a new study on the subject, will address these and other issues about the reality of torture in Brazil. The purpose: to open, gradually, the black box that still shields and protects the practice, particularly in the country’s detention facilities.

The first debate will take place in the auditorium of DPESP (São Paulo State Public Defender’s Office) on Thursday, January 29, at 6:30 pm. The debate will be held between Bruno Shimizu, of DPESP’s Prison Situation Center; Rafael de Sá Menezes, of the Office’s Citizenship Center; Aristeu Bertelli da Silva, an agent at the Mauá Unit of DPESP; Alderon Costa, the Office’s Ombudsman; Vivian Calderoni, of Conectas; and Gorete Marques, of NEV (Center for the Study of Violence of the University of São Paulo). Registration is not necessary.

Further editions of the event will be held in Brasília, Rio de Janeiro and at the UN Human Rights Council in Geneva, Switzerland.

During the debate, the conclusions and recommendations of the report “Judging Torture: Analysis of jurisprudence in Brazil’s State Courts of Appeals (2005-2010)” will be presented. The study was produced by Conectas, IBCCrim (Brazilian Criminal Sciences Institute), NEV, Pastoral Carcerária (the Catholic Church’s prisoner outreach service) and Acat-Brazil (Action of Christians for the Abolition of Torture).

Through an analysis of 455 rulings from all Brazil’s State Courts of Appeals, the study concluded that public officials involved in torture cases are more likely to be acquitted than private individuals (relatives, spouses, private security guards, etc.). The state employees who were convicted by trial courts were acquitted in the appeals courts in 19% of the cases. For private individuals, the rate was 10%.

“The data show that the courts rule differently depending on the profile of the defendant and the victim,” said Vivian Calderoni, a lawyer for the Justice program at Conectas. “Many of the acquittals, in the cases involving public officials, are justified by a lack of evidence. This could reveal either an alarming inability of the State to investigate torture committed by its employees or a tendency to discredit the testimony of victims who are suspected or already serving a sentence for another crime,” she added.

“Torture committed by agents of the State occur in detention facilities, which are shrouded invisibility,” explained Gorete Marques, a researcher at NEV. “To overcome this problem, it is vital that places of detention, whether police stations or prisons, are constantly monitored by the State and by civil society. Torture is a crime of opportunity and we need to stop the conditions that allow it to keep on happening.”

The complete study can be acessed here.