The police need to be discussed 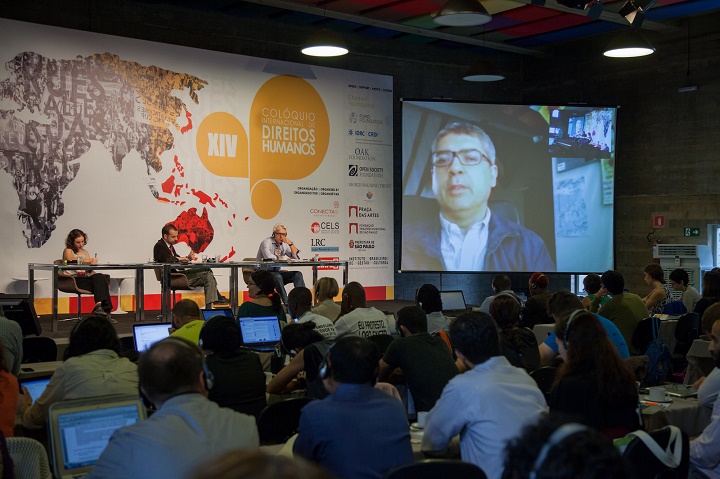 “Conflict in society is not a bad thing. Societies need conflict and debate to evolve,” said Hendrickx.

It is the police who perform the role of the State in the mediation between social movements and the public arena. This was the premise for the debate, this Tuesday May 26, by the panel “The use of force and the prevention of violence – The role of the State”, the first of the second day of the 14th International Human Rights Colloquium.

Serving on the panel were Eddie Hendrickx, a Belgian policing expert; Rodrigo Ghiringuelli de Azevedo, a professor at the Catholic University of Rio Grande do Sul (PUC-RS); Camila Maia, a member of the international work team of CELS (Center for Legal and Social Studies); and Rafael Custódio, coordinator of Justice at Conectas. They all agreed with the assessment that the bureaucratic and self-serving structure of police forces like Brazil’s makes the relationship between the streets and governments essentially violent – which should lead civil society to discuss solutions to the current model.

“Conflict in society is not a bad thing. Societies need conflict and debate to evolve,” said Hendrickx. He explained that police forces should focus on managing this conflict – not controlling it. This, according to Hendrickx, requires a reform of the military structure of the police. “The police need to understand that, even though people commit crimes or are violent, they should not be seen as an enemy to be eliminated.”

Hendrickx, who worked on the reform of the police in post-apartheid South Africa, also addressed the prioritization of order over the law.

For Rodrigo Ghiringelli, civil society needs to discuss the role and the structure of the police more and help build an appropriate model for a democracy. Today, he says, there is no consensus among social movements and organizations about the ideal way the security forces should operate.

The professor also pointed out that the poor training of police officers is an important factor contributing to the perpetuation of the culture of violence and repression in the country. “The investigative police is more like a bureaucracy than a force committed to solving crimes. On the one hand we have a violent police, and on the other a bureaucratic and inefficient police,” he said.

Rafael Custódio and Camila Maia also stressed the need for a more serious debate on the police by human rights organizations. According to Maia, the discussions so far have been merely technical – which has prevented a broader assessment of the role of the State in the repression of protests. “The way the police operate has not been included in the political debates on what we expect from the State,” she added.

This article was written by Danillo Oliveira and is part of the collaborative coverage of the 14th Colloquium.