The importance of the new Migration Law in Brazil

A statue that considered migration as a threat to national security and lasted for thirty five years, preceded the law 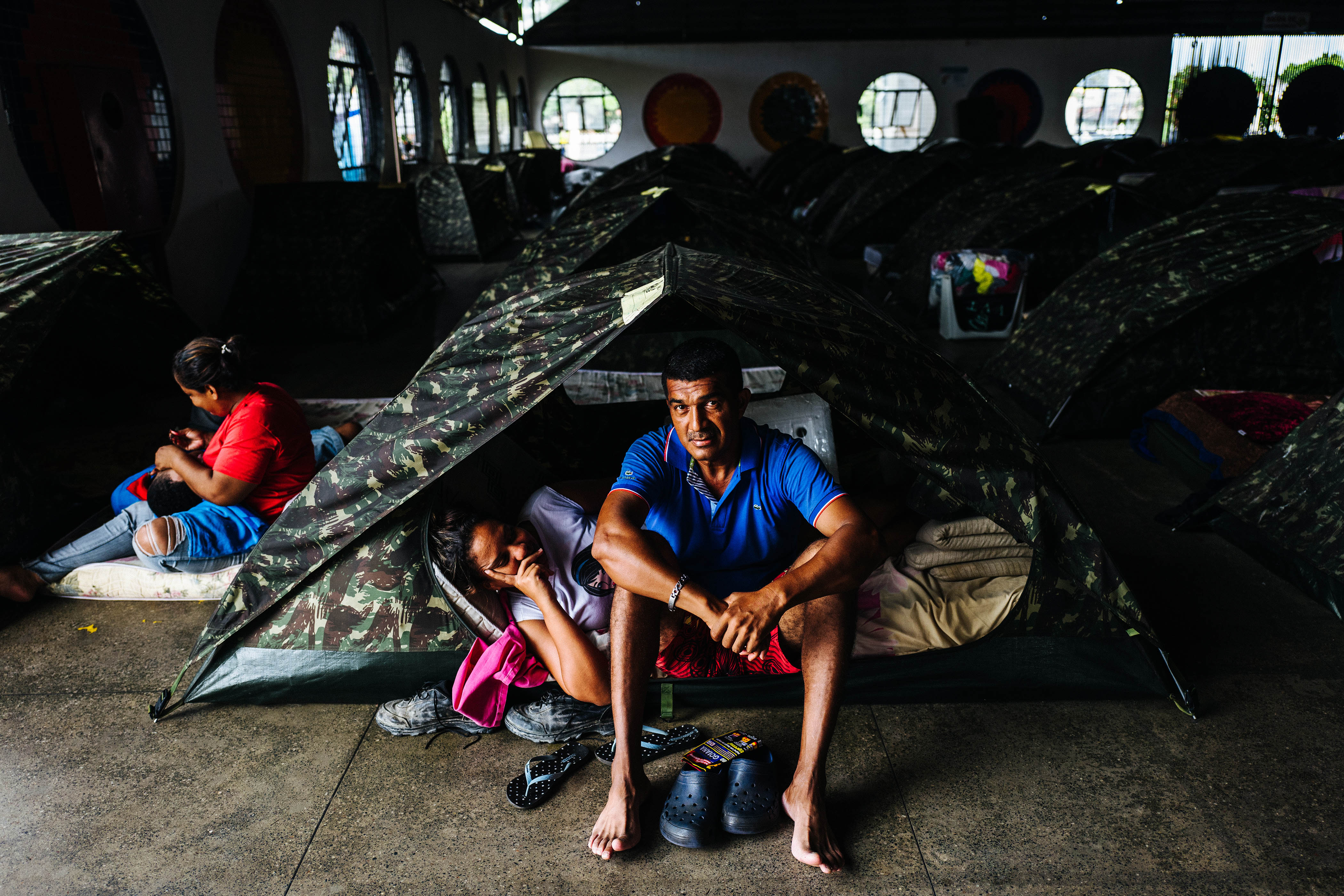 The arrival of thousands of migrants was a determining factor in the economic and cultural development of Brazil. Despite this contribution to history, legislation was discriminatory and restrictive regarding this sector of the population, until the new Migration Law, was passed in 2017. The importance of this new paradigm, whereby migrants are treated as people with rights, becomes even clearer when we understand the migratory process in Brazil.

Discrimination in the law

Whereas immigration was encouraged by the Brazilian authorities throughout the nineteenth century, at the beginning of the twentieth century the arrival of immigrants in large numbers began to provoke distrust in the government, who feared the arrival of criminals and ‘communists’ in the country, according to experts, Roberto Marinucci and Rosita Milesi. This situation grew worse in the 1930s and was reflected in the Constitutions and decrees of that time. 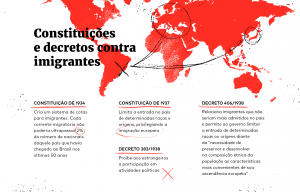 One of the groups affected were the Jewish immigrants. In 1935, the government started to refuse visas for this group of people. In 1937, a secret letter was sent round, banning visas for ‘people of Jewish origin’, including tourists and people on business.

After the Second World War, although the government eased the law with a view to attracting specialised professionals, it continued to be racist. One example is a decree in 1945 that reiterated the need to preserve the influx of people of ‘European descent.’

A statute created during the dictatorship that lasted three decades

During the military dictatorship this heritage of discriminating against migrants in Brazil was also in evidence. It was during this period, in 1980, that General João Figueiredo sanctioned Law 6815, known as the ‘Statute of Foreigners’.  The following graph shows some of the items in this legislation. 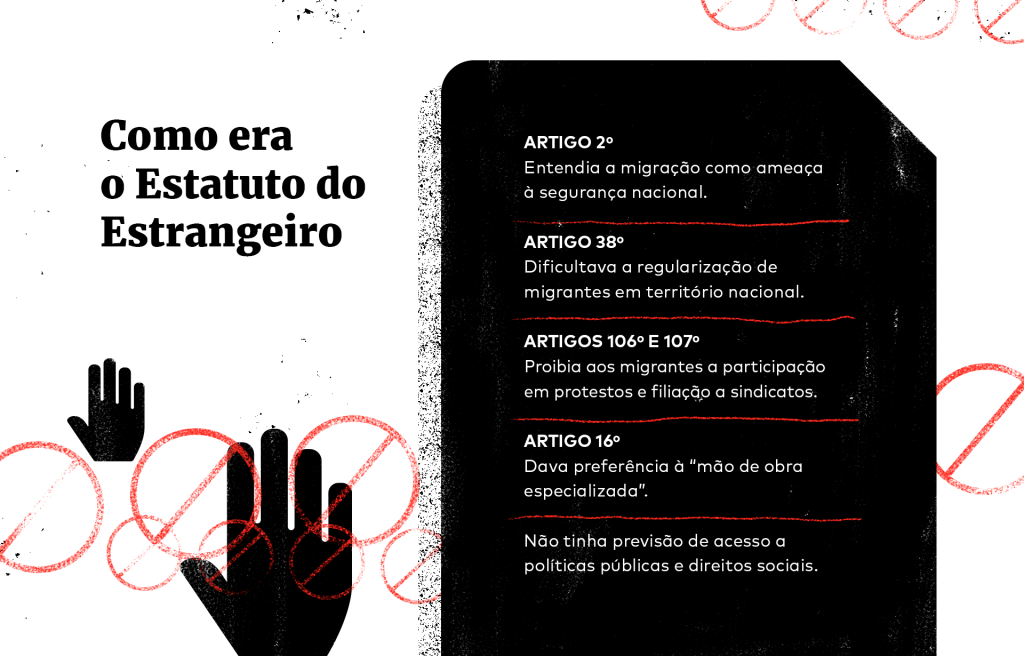 Although the 1988 Constitution establishes equality between Brazilians and foreigners (article 5), the fact that the statute is still the benchmark regarding this matter has created a number of barriers for people arriving in Brazil.

As there was no law to guarantee migrants’ basic rights, over time the CNIG (National Immigration Board) created by the statute, published a series of resolutions to overcome gaps in the law. Meanwhile, migrants and civil society organisations working on the matter of migration, along with experts on the subject, called for a New Migration Law, with a view to guaranteeing human rights.

In 2010 Conectas decided to start including migration as one of its matters of priority, given the increasing global migratory flow and Brazil’s reputation around the world. The need for a New Migration Law was a recurring theme in conversations with professionals working in the area. 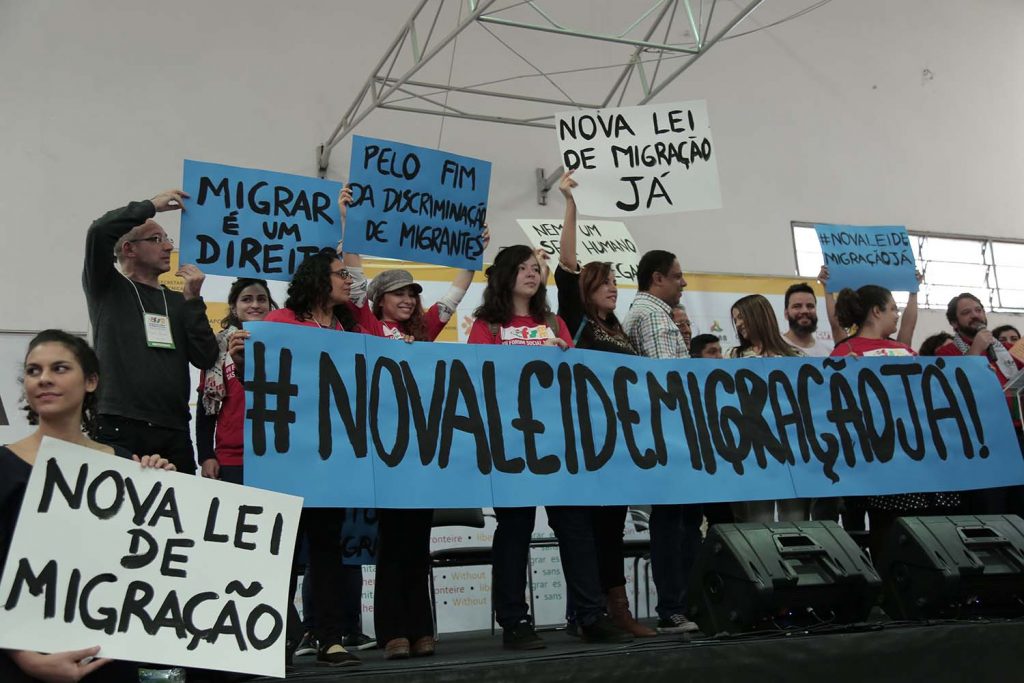 “It was an unconstitutional law with a series of problems. Brazil did not have bad migration practices, but if it had followed the law to the letter it would have been one of the most retrograde,” said Conectas Programme Coordinator, Camila Asano.

The issue started to draw more attention with the increasing influx of Haitians who started to arrive in Brazil in 2010, following the earthquake that devastated the country. At that time, Brazil led the UN mission in Haiti, known as MINUSTAH.

Faced with the lack of a legal mechanism to legalise Haitians, CNIG created a humanitarian visa so they would be able to stay in the country. However, issue of this was restricted which led to Conectas publishing a public note at the beginning of 2012 calling for the government to make provisions for the case and to define its migration policy.

Haitians queuing to show documentation at a migrant shelter in the municipality of Brasiléia, in Acre, during a visit by Conectas to the location, from 4/8/2013 to 6/8/2013. Photo: Gabriela Bernd

“The current situation is drawing attention to the need for the Brazilian government to define clearly and transparently and in dialogue with society, how it intends to handle the growing number of foreigners who are looking to Brazil for better living conditions.” Conectas made this point in 2014 when they took the case to the UN and the InterAmerican Human Rights Council following a series of human rights violations against Haitians.

With the matter of migration in the limelight in Brazil, drafts were retrieved and fresh ones developed in order to create new legislation. In seeking consensus for approval of the norm, Executive and Legislative offices decided to centre efforts around the Senate Draft Bill (PLS) 288/2013, and four years later this led to the New Migration Law – law 13.445.