The complex relationship between business and human rights 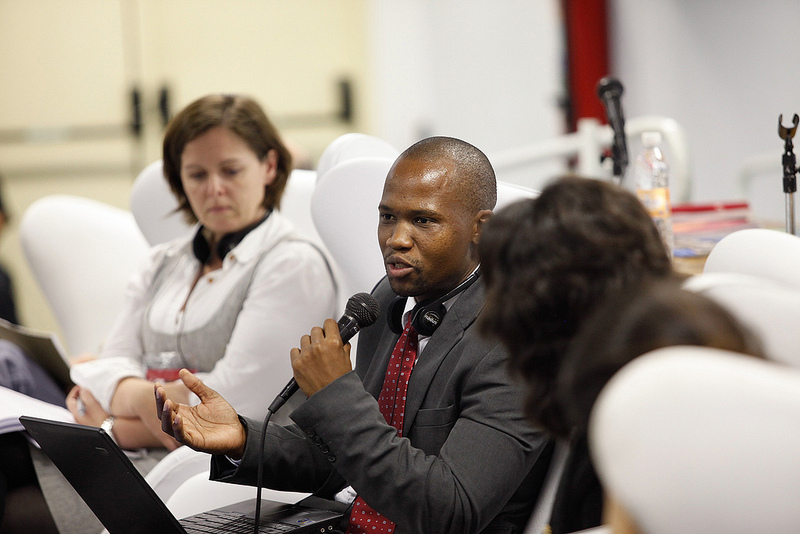 The conflict of interest that very often exists between private capital and respect for the environment and human rights is not a new concern. Social responsibility actions and even lines of financing in world banks have been applied to mitigate this process. But this is not enough. Not by any means.

The second day of the 13th International Human Rights Colloquium, organized by Conectas, addressed the topic of economic development, large companies and human rights. The panel, formed by Andressa Caldas (Justiça Global), Bongumusa Sibiya (Legal Resources Center), David Kinley (University of Sidney) and Kristen Genovese (Center for International Environmental Law-CIEL), dissected, in each sector, this conflict and related their experiences with the intention of identifying ways to narrow the gulf between these interests. Juana Kweitel (Conectas) served as moderator. See below a summary of the discussion:

Although many sectors of the economy, such as technological development, for example, have consistently violated the inalienable rights of workers and the environment, the extraction industry (mining, oil and gas) is, by its very nature, a high-impact sector. “Is sustainable mining possible?” asked Andressa Caldas, of Justiça Global. “It is a debate that needs to be addressed,” she added. “It is little wonder that these big companies fund major social responsibility projects.”

On this matter, the State was also identified as playing a crucial and often controversial role. Indeed, while the State depends on these sectors to drive the economy, it also has the responsibility to watch and guarantee that rights are being observed. “What the State does in practice, however, is license questionable projects and turn a blind eye to blatant aggressions against the environment,” said Andressa.

The role of companies and the private economy was also cited as being capable of interfering decisively in popular demonstrations. “President Dilma Rousseff, after a meeting with Ambev and Itaú, both major sponsors of the World Cup, said that there would be no protests during the games,” said Andressa Caldas, of Justiça Global.

Bongumusa Sibiya, of the Legal Resources Center, said that in South Africa, private companies instructed members of parliament to increase police oppression to put down popular uprisings. “They are people who are not prepared to deal with demonstrations,” he said. “The result was the use of firearms and deaths.”

The experience of litigation

One of the issues raised during the Colloquium was the importance of litigation to assure rights and set precedents for other cases. “We had some important cases of interference in the death penalty in South Africa, which was legal until 1994,” said Bongumusa Sibiya, of the Legal Resources Center. “Other victories have also been achieved, involving the rights of prisoners and social security for foreigners.”

Sibiya recounted the case of workers who developed silicosis, a serious respiratory disease that affects miners who inhale silica, who were awarded financial compensation. “Before this, many people died,” he said. “These companies thought they would not be held to account, but they were, and for millions.”

“Litigation has been important in South Africa, creating laws adjacent to the constitution that provide a basis for other issues,” he explained.

David Kinley (University of Sidney) recalled the cases of Shell, which after 30 years agreed to a 53 million settlement as compensation for cancer victims, and of Nike, which also spent millions to compensate multiple victims of racism.

How to choose cases to litigate

David Kinley also mentioned the care that should be taken with litigation. He explained that the selected cases must have:

Despite numerous public policies and resolutions, one frequently overlooked orthodox human rights issue was highlighted: legally, the State is the only organization directly responsible for the protection of human rights. “It is to the State that we should turn when these rights are violated,” argued Kinley. Understanding this premise lends more complexity to specific circumstances of violations: such as the case of transnational companies and human rights violations by States outside their territories.

“We’d like it to be different, but it’s not. For the time being, only the State is responsible,” he said.

Nevertheless, a series of lawsuits and case laws have been established by human rights organizations from around the world that have helped resolve conflicts. There is an understanding that the United Kingdom and the United States are responsible for human rights violations in Iraq, for example – just as Israel is for actions outside its territory. Many of these understandings, however, have come from UN resolutions that are not fully applied in many cases.