Recommendations to the Truth Commission 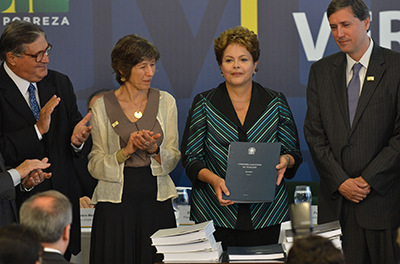 Conectas this week sent the members of the NTC (National Truth Commission) seven proposals to address police violence, combat torture and mistreatment in prisons and assure the independence of forensic exams. If they are accepted, the recommendations will be incorporated into the final report of the Commission, paving the way for the debate on the institutions and practices that have persisted since Brazil’s redemocratization process.

The suggestions are directed to the Legislative, Executive and Judiciary and include the creation of state-level mechanisms to prevent and combat torture, similar to the federal mechanism created in August 2013, and the approval of a bill that establishes detention hearings – which would require suspected offenders to be seen by a judge within 24 hours of their arrest, reducing mistreatment and preventing unnecessary imprisonment.

Created in 2011, the NTC is the most important federal mechanism for investigating and documenting the violations that occurred in Brazil between 1946 and 1988 – a period that covers the military dictatorship (1964-1985). It is hoped that the final report will take concrete steps towards guaranteeing the right to memory, truth and justice for the victims of persecution.

See below the recommendations submitted by Conectas:

1) Recommendation: Creation of Mechanisms to Prevent and Combat Torture in all the states of the federation, in accordance with the Optional Protocol to the UN Convention against Torture and Other Cruel, Inhuman or Degrading Treatment or Punishment.

Justification: The need to prevent and combat the practice of torture in Brazil is acute. The UN has said that torture is systematic in Brazil (UN, Committee against Torture. “Report on Brazil produced by the Committee under art. 20 of the Convention”, Document CAT/C/39/2, paragraph 178 (“torture and similar ill-treatment continues to be meted out on a widespread and systematic basis”). Brazil is a signatory of the UN Convention against Torture and Other Cruel, Inhuman or Degrading Treatment or Punishment that requires the creation of a National Mechanism to Combat and Prevent Torture. Last year, the country finally approved, after years of delay, Law No. 12,847/2013 that established the National System to Combat and Prevent Torture. Both the OPCAT and Law No. 12,847 recommend the creation of State-Level Mechanisms to Prevent and Combat Torture. Added to this, considering there are only 11 members of the Mechanism to Combat and Prevent Torture to cover the whole country and all its prisons, it is essential for state-level mechanisms to be created so they can work in a coordinated way.

2) Recommendation: Creation of Detention Hearings (with a time frame of 24 hours for suspects to see a judge).

Justification: The American Convention on Human Rights (Pact of São Jose, Costa Rica) states that: “Any person detained shall be brought promptly before a judge or other officer authorized by law to exercise judicial power…”. This personal encounter between the judge and the recently arrested suspect, in the presence of their lawyer, is a decisive means of combating the practice of torture and mistreatment, since research has found that more than half of suspects report the use of physical force to make them confess or change their statements. Furthermore, the creation of such an institution – which already exists in a number of other Latin American countries – would make criminal procedure more efficient and assure that the rights of detained people are protected quickly and efficiently. There is already a bill on the matter pending in Congress (Senate Bill No. 554/2011).

Justification: Community Councils are provided for in the Prison Sentence Enforcement Law as an enforcement body (article 61, VII) and they are an important part of the social control of the country’s prison facilities. Prison inspections are an essential means of combating and preventing torture. However, these Councils are linked to the State Courts, which significantly limits their autonomy and independence. It is essential for these Councils to be strengthened so they can perform their fundamental role as agencies of social control and for them to be created in all the judicial districts that have prisons.

Justification: All children, elderly people, women and men must endure an abusive search before they can visit their relatives in prison. The procedure requires them to undress, squat several times and frequently have their genitals inspected. The searches may be considered torture. The UN special rapporteur on Torture, Juan Mendez, has said that the abusive search constitutes cruel, inhuman and degrading treatment.  It is essential for the State to abolish this practice.  There is already a bill on the matter pending in Congress (Bill No. 7,764/2014).

Justification: The lack of independence and autonomy between the forensic agency and public security agencies creates conflicts of interest that can result in collusion by forensic officers, particularly in serious crimes such as torture. It is necessary, therefore, to break the link between forensic medicine centers and the criminal forensic departments of the police, in observance of the Istanbul Protocol.

6) Recommendation: Creation of external and independent ombuds offices and internal affairs units for the prison system and police forces.

Justification: The mechanisms to control public institutions need to be strengthened. And these oversight agencies are more effective if they are independent. This is why they need to be formed by civil society representatives, not government personnel, so they can maintain their autonomy and do their job without the risk of collusion.

7) Recommendation: Reform of the police

Justification: The division of police work between a force responsible for investigative policing (civil police) and another for street policing and the “preservation of public order” (military police) was determined during the military dictatorship, but preserved in the Constitution of 1988. The Brazilian Constitution states, in article 144, that the military police answer to the state governments, but they also constitute “ancillary and reserve forces of the Army”. It is essential for this policing model to undergo a profound reform that includes the following minimum standards: (1) unification of the cycle of police work; (2) civil organization – not military; (3) single career path; (4) external ombuds offices and internal affairs units. A Constitutional Amendment Proposals on the matter is currently pending in Congress (PEC No. 51/2013).