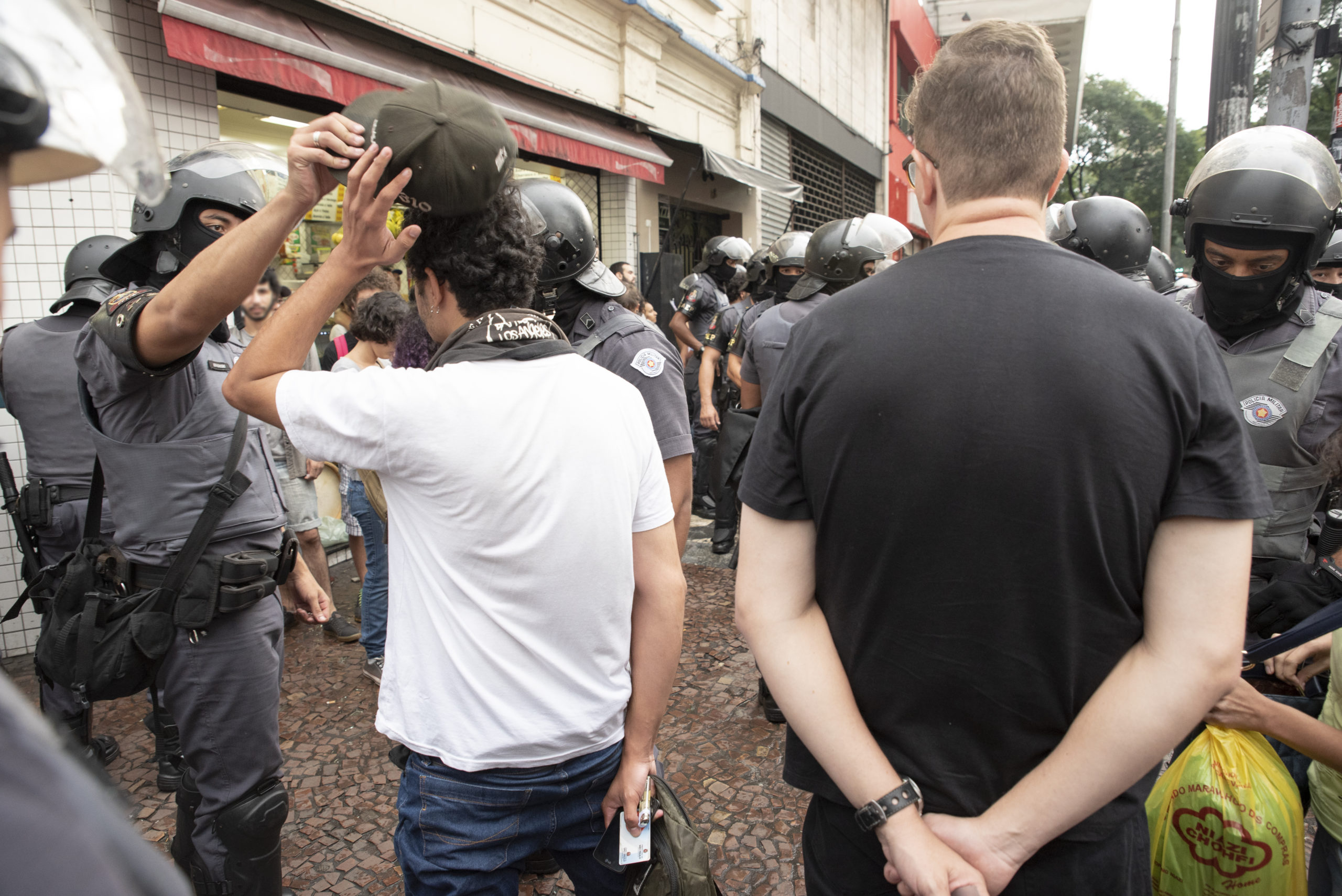 Being threatened, assaulted and tortured by the police, reporting it to a judge and then seeing the uniformed colleagues of your aggressors put in charge of the investigation. This is a reality for the majority of people who are arrested and who report police violence in pre-trial custody hearings.

According to the study “Labyrinthine Investigations: the course of inquiries into reports of police violence made at custody hearings”, produced by Conectas in partnership with IDDD (Defense of the Right to a Defense Institute), based on a qualitative analysis of reported cases in São Paulo, these crimes, as a rule, are not resolved and there is no accountability. This undermines one of the main purposes of the hearings: to combat torture and mistreatment by state security agents.

In October 2017, the passage of Law 13,491 changed the way cases of police violence were judged following complaints made in custody hearings. Since then, judges send the report to be investigated by the Military Police, which in turn refers it to the Battalion where the alleged perpetrators of the violence are stationed. In other words, for the past three years, the investigation of torture and mistreatment by military police officers is carried out by their uniformed colleagues and commanders.

The research analyzed the impact of this law and identified refinements in the mechanisms for shielding the structural violence of the State. Before the change in the law, 52% of complaints were shelved after the initial analysis. After the change, two cases were shelved prematurely and 30 were investigated, but a remarkable 86% of them (26 cases) were shelved without opening a Preliminary Investigation or a Military Police Inquiry.

One of the most emblematic cases in the study was a complaint made by a person who was threatened with having their ears cut off with a pocket knife during the police arrest. In the courthouse, he told the judge what had happened, but the medical examination found no physical injuries since the violence was psychological. As a result, and due to the lack of other supporting evidence, the Preliminary Investigation recommended that the complaint be shelved.

As rarely happens after such a recommendation, the Public Prosecutor’s Office decided that a Military Police Inquiry should be opened to clarify what had transpired. The inquiry was opened and the case was referred to the Battalion where the military police officers who made the reported threats were stationed. When faced by the colleagues of his alleged aggressors, the complainant backed down: “he replied that at no point and not even in the custody hearing did he accuse the police officers of aggression, and that he only mentioned ‘psychological pressure’ so he would take the officers to his home, that he felt he had been poorly treated by the officers, but at no point was he assaulted”.

According to Nina Cappello Marcondes, a lawyer and one of the researchers responsible for the report by Conectas, this proximity between the people doing the investigating and those being investigated represents a serious flaw in the complaint process and makes the custody hearings a wasted opportunity.

“People report a case of violence to a judge, inside a courthouse, with the presence of a public defender and a prosecutor. Who would imagine that this report would be sent to a police battalion based on territorial criteria, i.e. close to where they live? This violates all guarantees for the investigation of police violence. Knowing the Brazilian police, we can assume that there is a risk of the person being approached again, because they reported a complaint of police violence and the police know it,” said the lawyer.

Marcondes pointed out, however, that the flaws in the investigation of complaints reported at custody hearings is not just because of the militarization of the inquiries. Before the change in legislation, when the investigations could be conducted by the Civil Police, the situation was not much better: “Investigation by the police is very serious, but this is not the only problem. The main takeaway from this study is to consider other ways of investigating police violence: neither by the Civil Police, nor by the Military Justice system”.

And this analysis is not only based on data gathered during the research, but also on an international decision. Brazil was convicted by the Inter-American Court in the Nova Brasília Favela case, and one of the resolutions advises the “delegation of the investigation to an independent body other than the police force involved in the incident”.

According to Isabel Figueiredo, a lawyer and member of the Brazilian Public Security Forum, the main problem is the lack of coordination between the Security and the Justice systems in Brazil. The solution, therefore, requires a structural change: more objective criteria for referring cases, more gathering of evidence and a better established workflow.

“I have talked to police officers who say they don’t know where they are supposed to send it. On at least one occasion, it was returned to the judge who said it had nothing to do with him. The Judiciary, to some extent, organized itself to report the complaint, but not to receive the feedback and know the outcome,” said Figueiredo, who is also former director of the National Public Security Department of the Ministry of Justice.

With regard to this lack of control by the Judiciary on the cases of violence that are referred, the study recommends a control of the number of cases in which complaints are reported, as well as the disclosure of this data. The goal is to have indicators to inform public policy and, more importantly, to prevent the practice of institutional violence.

“It is a structural change that requires an understanding by the Judiciary, which still does not exist, that police violence is structural, based on a racism that is also structural. While they are viewed as isolated cases, nothing will change,” said Nina Cappello Marcondes.

Some reports collected by the “Labyrinthine Investigations” study reveal violence against women. In one case, a pregnant woman claimed that a police officer stepped on her back. In another, a woman said that a male officer put his hands inside her bra and knickers during the search. There is also a case of one woman who had to take her clothes off in the presence of male police officers during the search.

These cases demonstrate a flaw in the structure of the Judiciary when it comes to the physical examination. In the cases analyzed in the study, there were no forensic doctors assigned to examine women. In other cases that are difficult to detect in standard medical examinations, there is no established protocol.

The recommendations contained in the “Labyrinthine Investigations” report for a better resolution of the cases of police violence include: the availability of a multidisciplinary team during the physical examination and the right of the examinee to choose the race and gender of the examiner.