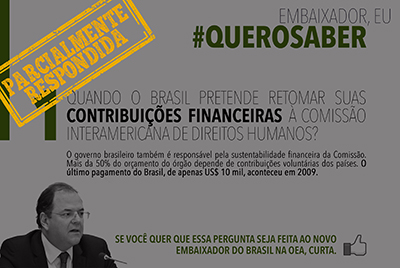 In a confirmation hearing held today, May 14, in the Foreign Relations and National Defense Commission of the Senate, Guilherme Patriota – the recently nominated ambassador of Brazil to the OAS (Organization of American States) – was questioned about the country’s debt to the organization, of around US$8.1 million. The sum of Brazil’s outstanding mandatory payments represents 9.94% of the annual budget of the OAS.

The question on the debt payment, asked by Senator Ricardo Ferraço, was followed up on by the president of the Commission, Aloysio Nunes. Mentioning the “Ambassador, #IWantToKnow” campaign, organized by Conectas in the days leading up to the hearing, Senator Nunes asked Patriota about the lack of voluntary donations by the country to the Inter-American Commission on Human Rights – one of the main bodies that monitors violations in the region.

In response, Patriota assured that he will do “what I can”, in conjunction with the Planning Ministry and the Foreign Ministry, to resume making the mandatory payments. The ambassador also said that the debt is not an “exclusive phenomenon of the OAS” and that the government owes money to various international bodies, including the UN.

According to Camila Asano, coordinator of Foreign Policy at Conectas, the question was only partially answered. “The ambassador promised to engage the Planning Ministry and the Foreign Ministry to pay the debt the country owes to the OAS, but he did not mention the lack of direct donations to the IACHR,” she said. The last voluntary payment by Brazil to the Commission, of just US$10,000, was made in 2009. “We hope that the ambassador’s willingness to honor our commitments to the OAS includes the urgent financial strengthening of the Commission,” added Asano.