Pandemic: the impacts of preventing doctors trained abroad from working in Brazil

Examination to validate foreign medical diplomas has not been held for 3 years. The Ministry of Education failed to keep its word and publish in July a public notice for the exam to boost the number of doctors in the country 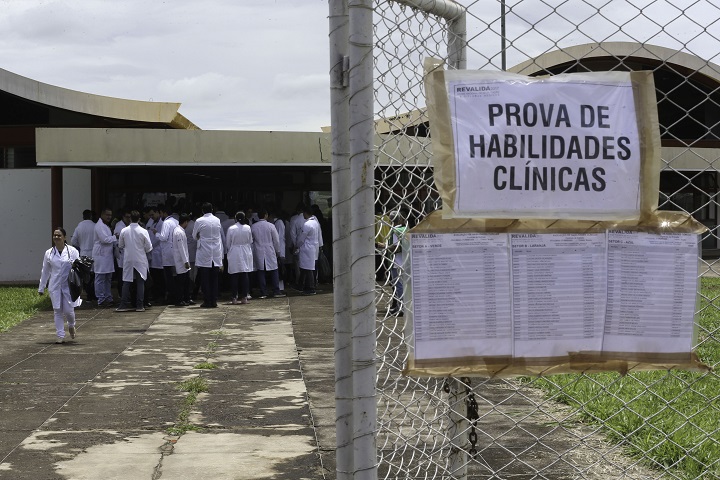 According to a report by the Federal Medicine Council published at the beginning of June, Brazil had 523,528 registered working doctors in its 27 Regional Medicine Councils. This number represents an average of 2.5 doctors per thousand inhabitants, taking into account the Brazilian population of approximately 212 million people.

This is higher than the figure in countries such as Japan and Mexico, which both have 2.4 doctors per thousand inhabitants, and just below the United States (2.6), Canada (2.8) and the United Kingdom (2.9).

However, as the council itself points out, “the absence of public policies has caused these professionals to be poorly distributed among the states and regions” of the country.

Whereas every thousand people in the Federal District have 5.1 doctors, the state of Pará has just 1 medical professional for this same number of inhabitants. In the Southeast of the country, the states of São Paulo, Rio de Janeiro, Minas Gerais and Espírito Santo are above the national average. The opposite is true in the Northeast, where all the states are below the Brazilian average. The situation is the same in the North, where all the states have less than 1.8 doctors per thousand inhabitants, with the exception of Tocantins (2.0), which is still below the national average.

One way to alleviate the lack of doctors mainly in the North and Northeast would be to contract professionals – Brazilians and non-Brazilians – who live in Brazil but who graduated abroad.

To do this, according to rules established by the Ministry of Education, anyone who earned a medical degree at a foreign institution recognized in the country of origin must have their diplomas validated in Brazil and the main way to do this is to take the National Examination to Validate Medical Diplomas, better known as Revalida.

However, the last Revalida exam, which is supposed to be annual, was held in 2017. Earlier in 2020, the Ministry of Education announced that in July it would publish a public notice for the exam, which was planned for October. The month came and went, but the notice was not published and no new forecasts have been made by the ministry.

In the last exam, 3 years ago, 963 professionals had their medical diplomas validated. In 2017, a total of 7,379 doctors enrolled in the exam.

Validation of diplomas in universities

The validation of diplomas can also be done by public universities, but the vast majority of academic institutions prefer to advise professionals to take the national exam organized by the Ministry of Education, even though it has not taken place for three years.

Due to the pandemic and the demand for doctors, UEMA opened a national validation process between May 8 and 15 of this year. The list of people who registered, published on the 22nd of the same month, contained 4,356 names.

In addition to the exam, the candidates need to present their graduation documentation to a commission formed by doctors to determine the origin. However, the Regional Medicine Council of Maranhão issued a resolution instructing medical professionals not to participate in this validation process. According to the statement by the council, the process established by the university violates the law on validating diplomas and medical ethics.

Civil society organizations, such as Conectas, and the Public Defender’s Offices of some states and of the federal government have been pressuring governments to speed up the processes and calling for more flexibility in the legislation so doctors trained abroad can work in the country during the pandemic.

“It’s despairing to think that we have professionals in the country who could be helping to save lives, but because of bureaucratic obstacles they are prevented from practicing their profession. There needs to be flexibility. Urgent and emerging situations like this require temporary, exceptional and urgent measures,” said Camila Asano, program director at Conectas.

“The inefficiency of the Brazilian State in not holding the Revalida since 2017 has caused the country to disregard for at least 3 years the addition of doctors trained abroad to our already struggling public health system. Now, because of the pandemic, some exceptional measures have been taken, such as bringing forward the graduation of medical students. Why not also take measures to incorporate migrant and refugee doctors in the collective effort to combat Covid-19?” asked Asano.

According to Asano, non-compliance with the time frame announced by the Ministry of Education for publishing the public notice for the Revalida exam is another example of the Bolsonaro government’s neglect in combating Covid-19. The pandemic has revealed the lack of doctors in regions such as the North and Northeast, not to mention the number of doctors who are off work due to infection or because they are in risk groups.

The pandemic legislation in Brazil already has the legal provisions for this. The Quarantine Law, published on February 6 of this year as soon as the first Covid-19 infections were recorded in the country, permits the adoption of exceptional measures, which may even be adopted by state and municipal governments without the need for authorization from the federal government.

National and international examples during the pandemic

Given the need for quick and urgent actions imposed by the pandemic, a number of countries have already relaxed their laws in different ways and cut the bureaucracy for hiring doctors trained in other countries.

This has been done in Canada, Germany, Peru and in the US, in some states. To date, the Brazilian federal government has not adopted any type of measure to allow these professionals to practice medicine.

Even nationally, there are some isolated initiatives in place. In May, for example, the Rio de Janeiro state legislature approved the exceptional and temporary hiring of medical professionals without a diploma validated in Brazil during the pandemic.

In Sergipe, a court ruling authorized the municipal government of Aracaju to contract doctors trained abroad without the Revalida certificate.

The case of Roraima

According to data from the Ministry of Health, Roraima has 33,151 cases of people infected with the novel coronavirus, which places the state more than 4 times above the national incidence rate. Until August 3, there had been 513 deaths, or nearly twice the national mortality rate.

Despite this, a field hospital built by the Army to provide emergency treatment to victims of the pandemic and help relieve the already overcrowded Roraima General Hospital was only opened on June 19, after its inauguration was postponed for months due to lack of doctors. Since April, 80 beds have been available.

To become fully operational, the hospital needs at least 126 medical professionals, but the state – which only has 1.6 doctors for every thousand inhabitants – cannot meet the demand.

The most recent public notice from the State Health Department, in May, to contract 600 doctors (with a Regional Medicine Council and/or Revalida certificate) had just over 20 applicants.

Given the spread of the virus, especially in the capital Boa Vista, and the shortage of duly registered medical professionals, the state government signed an agreement with the Public Prosecutor’s Office and the Public Defender’s Office undertaking to directly contract the 126 professionals necessary for the hospital to become fully operational, dispensing with the Revalida requirement, as provided by the Quarantine Law.

However, the Union of Medical Professionals appealed the move and secured a court order to ban the contracting of health professionals without a national examination certificate. Days later, a new court ruling authorized the hirings unless the Union of Doctors and the Regional Medical Council could provide a list with 94 qualified professionals who were available for work. Which, of course, they could not.

Ultimately, the unbureaucratic hiring of migrant doctors by the state government of Roraima allowed the field hospital to finally open and it is now catering to the local population suffering from Covid-19.

Supreme Court interpretation and the Constitution

The debate on the constitutionality of hiring doctors trained abroad was settled by the Supreme Federal Court in 2017 when it ruled on ADI Case 5035 on the Mais Médicos (More Doctors) program, which brought Cuban doctors to work in the country through a partnership between the governments of Brazil and Cuba and PAHO (Pan American Health Organization).

At that time, the Supreme Court ruled that the hiring of foreign doctors was constitutional without the validation of diplomas and registration with a medical council in exceptional circumstances, such as a health emergency. A full session of the court dismissed the claim that the validation of diplomas was a constitutional requirement and stated that the program was “a valid public policy option to try to minimize the difficulty of providing medical care in more remote places. Based on articles 3, III (2); 170 (3); and 198 (4) of the Federal Constitution of 1988, there is a way that medical services can be taken to all corners of the country”.

More recently, at the start of the coronavirus crisis in Brazil, the Supreme Court was called upon to rule on the jurisdiction of state and municipal governments to take measures to combat the pandemic. This occurred because of the federal government’s position of not only denying support, but effectively opposing such measures.

Since then, many states and municipalities have taken emergency initiatives such as hiring doctors trained abroad (including non-Brazilians), since there were not enough medical professionals available locally. Irrespective of the jurisdiction for regulating the medical profession in Brazil, given the severity of the pandemic, the constitutional provision of extreme necessity to guarantee the fundamental right to health should prevail.

Some lawsuits have been filed with the purpose of authorizing the use, on a temporary and exceptional basis, of this relevant workforce in our country. One was a case filed by the Federal Public Defender’s Office in São Paulo.

In this case, Conectas submitted a request to participate in the proceedings and provided data demonstrating the unequal distribution of doctors in the country, the growing trend of Covid-19 cases and deaths, the fact that the pandemic is spreading outside the major cities and into inland regions, and federal government’s inefficiency in the use of its resources. As such, we demonstrated that hiring doctors trained abroad is the most appropriate measure to face the pandemic and alleviate the regrettable deaths that have already occurred and that may still occur.