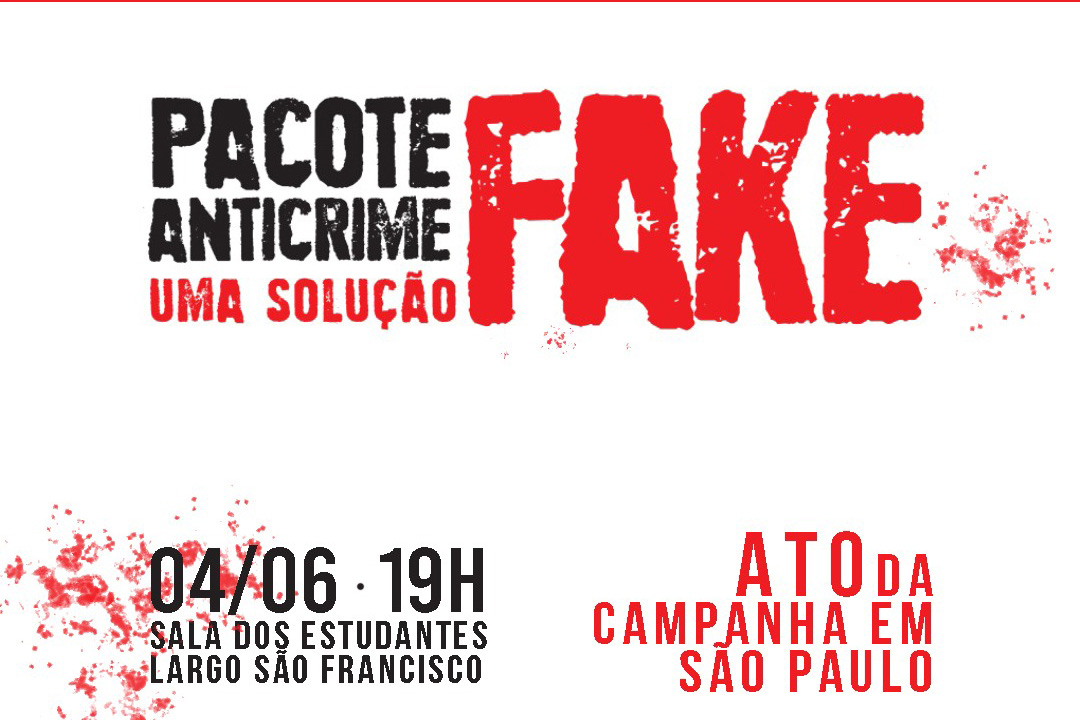 A protest about the Package will be take place in São Paulo, starting at 7pm on 4 June, in the Student Room of the Law Faculty at Largo São Francisco. This is another action in the campaign launched at the National Congress in March: “Anticrime Package, a Fake Solution.” The protest, organised by several different civil society organisations, is drawing attention to the fallacy of the package presented by the Minister for Justice and Public Security, Sérgio Moro, as a solution to the problem of public security.

The proposals contained in the package are supposed to have the objective of fighting organised crime, violent crime and corruption in a ‘simple and efficient’ way, according to its creator. However, no analytical studies of the social and financial impact have been carried out to substantiate the measures that are a head-on attack on the Federal Constitution and could well increase mass incarceration and its consequences, according to researchers. As such, in practice instead of improving security, the package, if approved, would lead to an increase in violence and public instability, would have a serious financial impact on federal states and would strengthen criminal organisations working within the prison system.

Public instability is a very serious problem plaguing the Brazilian people, who suffer with the war on drug trafficking, selective police violence and with an inefficient, unfair legal system. Meanwhile, effective solutions for these problems are being discussed publicly, with attention to both the structural complexity of the problems and to recognising the responsibility that the three Powers (Legislative, Executive and Judiciary) have towards Brazilian society.

For these and other reasons the organisations came together in a further protest as part of a national campaign that aims to lay bare the fact that the Anticrime Package is, indeed, a fake solution.

The campaign, launched in March at the Chamber and at the Senate in May, came into being as a response to proposals for harsher sentencing and the licence to kill presented in February by the Minister for Justice and Public Security, Sérgio Moro. There are currently two bills of law circulating in Brasília: the PL 882/2019, in the Chamber and bill of law 1864/ 2019 in the Senate presenting the same text. Institutions supporting the campaign believe that the changes set out in these bills are unconstitutional and would be inefficient in solving public instability in the country. As such, with the aim of demystifying the proposals presented and discussing a genuine way of facing the problem of public security in Brazil, everyone is invited to the protest. See below for information: