A statement released on Wednesday, October 6, by more than 120 human rights organizations, including Conectas, warns of the suspension of the work of the CNPCT (National Committee to Combat and Prevent Torture), the body responsible for investigating and preventing torture and mistreatment in prisons, nursing homes and psychiatric hospitals. Formed by members of the government and members of civil society, the CNPCT is chaired by Minister Damares Alves (Women, Family and Human Rights).

On Friday, October 8, civil society’s mandate, which lasts for a two-year period, ends and the organizations claim that the government is making it difficult to establish a new mandate. As such, if no new members are sworn in, the work of the committee could be halted.

The statement goes on to say that government members did not attend the Committee meeting that was scheduled to address this matter, on Monday, October 4. “The federal government does everything it can to prevent the functioning of the body responsible for debating this issue in this country,” reads the document.

The organizations are asking for another committee meeting to be held this Thursday, October 7. “As such, if the committee does not meet this Thursday to resolve its own survival, on Saturday, when the current two-year mandate of civil society organizations expires, the work of the body will, once again, be officially halted,” concluded the statement. 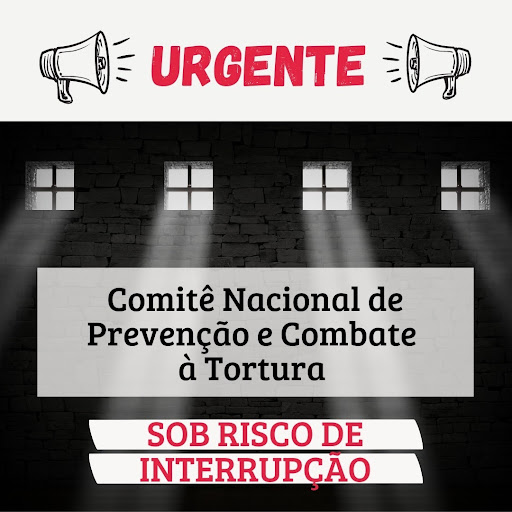 Undermining the combat of torture

In a decree published in August 2019, Bolsonaro dismissed eleven experts from the MNPCT (National Mechanism to Combat and Prevent Torture). In addition to the dismissal of the experts, the decree also determined that the work performed by the body would be considered a “relevant public service, unpaid”. In practice, the government undermined the country’s main prison inspection mechanism.

The decree provoked reactions from Brazilian civil society and international bodies. Upon learning about the matter, the IACHR (Inter-American Commission on Human Rights) expressed its concern. A statement signed by more than 200 organizations, including Conectas, the Brazilian Bar Association and IDDD (Defense of the Right to a Defense Institute), condemned the dissolution of the mechanism’s independence.

As a result, the Federal Public Defender’s Office filed a lawsuit calling for the suspension of the presidential decree. The request was partially accepted by the Federal Court of Rio de Janeiro, which issued an injunction to reinstate the dismissed experts.