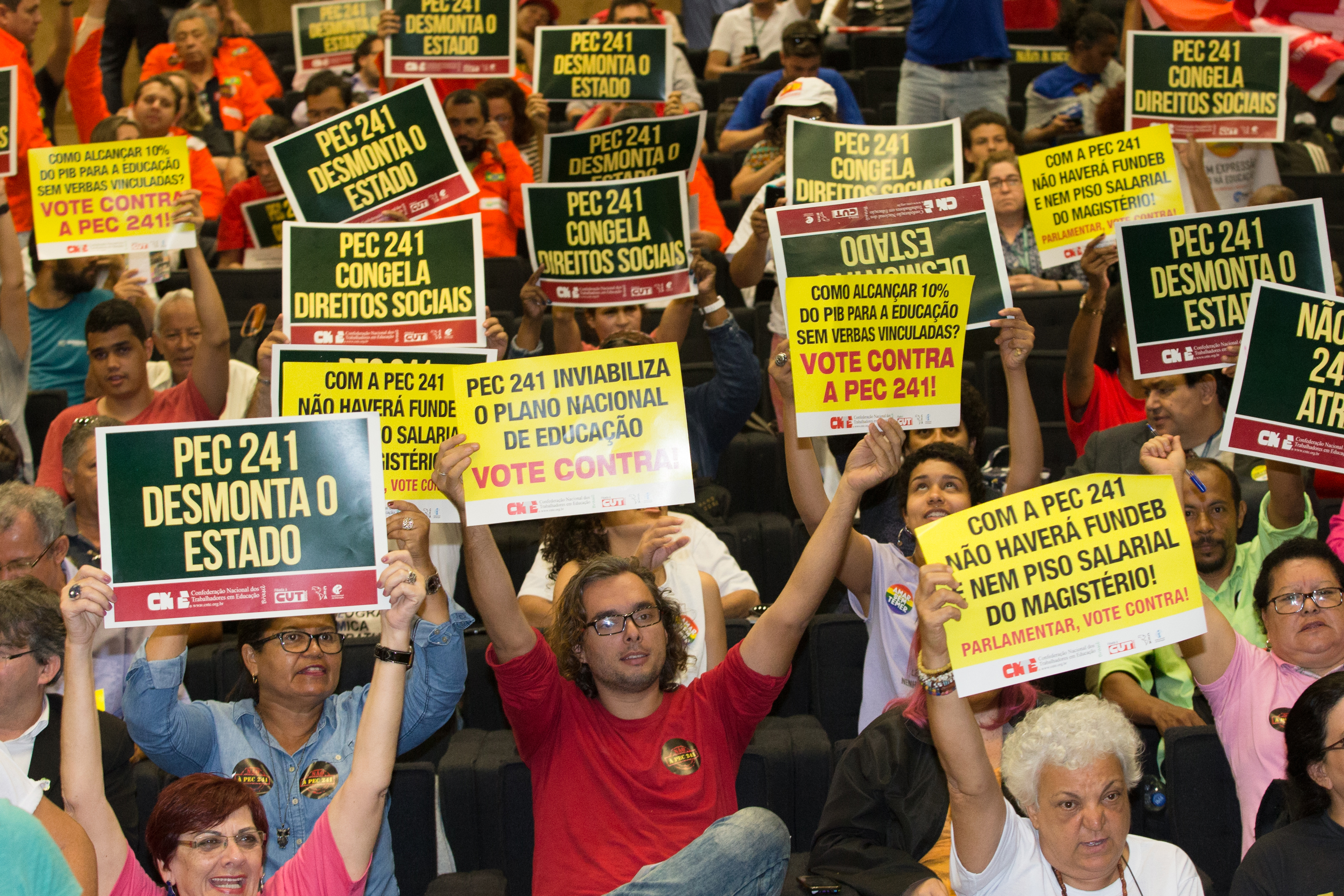 Human rights organizations filed a petition to the Supreme Court yesterday, March 18, for the immediate suspension of Constitutional Amendment 95 that establishes a cap on public spending. The organizations argue that the pandemic could cause the collapse of the health system and other social policies and that the effects will extend beyond 2020. They claim that supplementary funds alone via extraordinary credits will not be enough to restore that capacity of the public systems to cater to the affected population. “The effects are medium and long term and the extraordinary credits will be insufficient to address such weakness in the system,” said Eloisa Machado, a lawyer for the organizations who is a member of CADHu (Group of Human Rights Lawyers).

The organizations note that social policies are currently in a state of profound deterioration on account of funding cuts at the same time as demand for services is growing due to a sharp increase in poverty and extreme poverty as a result of the economic crisis and the deterioration of job security.

“It is in this explosive context of rising poverty and the destruction of social policies and labor rights that COVID-19 has arrived in the country. We appeal to the Supreme Court to put a stop to this Constitutional Amendment that directly violates the constitutional rights of the population and that has only caused a rise in hunger, suffering and death, while benefiting a minority,” said Denise Carreira, coordinator of the DHESCA Platform (for Economic, Social, Cultural and Environmental Human Rights) and the NGO Ação Educativa, one of the organizations that filed the petition.

The petition is also signed by Conectas Human Rights, the National Campaign for the Right to Education, Cedeca-Ceará and Fineduca (National Association for Research in Educational Financing) with the broad support of national forums, civil society networks, social movements and academic institutions. In addition to the suspension of the spending cap, the petition highlights the importance of an emergency action plan to tackle the pandemic with actions in healthcare, food security, social services and education, which includes the guarantee of a nationwide school food grant for all students left without school meals for the duration of the period classes are halted due to the COVID-19 pandemic.

Approved in December 2016, Constitutional Amendment 95 established the reduction in public spending on education, health, social services and other social policies for twenty years, deepening poverty, widening social inequality and, more specifically, further undermining the subsistence conditions of the population, particularly the poor and black population. Amendment 95 is the subject of Direct Actions of Unconstitutionality (ADI) Nos. 5633, 5643, 5655, 5658, 5715 and 5743 that call for its immediate repeal by the Supreme Court. All the ADIs were submitted to Justice Rosa Weber.

Studies conducted by the DHESCA Platform, by Inesc/Oxfam/Center for Economic and Social Rights, and by IPEA (Institute of Applied Economic Research), to name just a few, have demonstrated the profound impact of the Amendment in various social areas, resulting in major setbacks in the guarantee of rights.

In August 2018, seven UN rapporteurs issued a joint international statement denouncing the social effects of Constitutional Amendment 95 and the fact that Brazil is the only country in the world to have constitutionalized austerity as a long-term economic policy.

Also in 2018, the Inter-American Commission on Human Rights of the Organization of American States visited Brazil for the first time in more than two decades to check on the human rights situation in the country. The preliminary report of the IACHR expressed great concern with the fact that the country has a fiscal policy that disregards “the principle of progressive realization and non-regression in relation to economic, social and environmental rights”.

Criticized both inside Brazil and internationally as extremely ineffective and destructive for the living standards of the population, even by conservative international bodies such as the International Monetary Fund (IMF), the economic policy of austerity is based on an understanding that there is only one way out of the economic crisis: cut social spending, attack constitutional rights and privatize public assets.

This creates a vicious circle that weakens the economy, increases unemployment, lowers tax revenues, further concentrates income in the hands of few, destroys productive sectors of the national economy and violates – broadly and extremely perversely – the human rights of the population, with a devastating impact on the poorest sectors. Instead: social investments diminish inequality and are the driving force of economic development and social justice. This is why many countries, even in times of crisis, increase these investments as an anti-cyclical measure.