New complaint in the UN 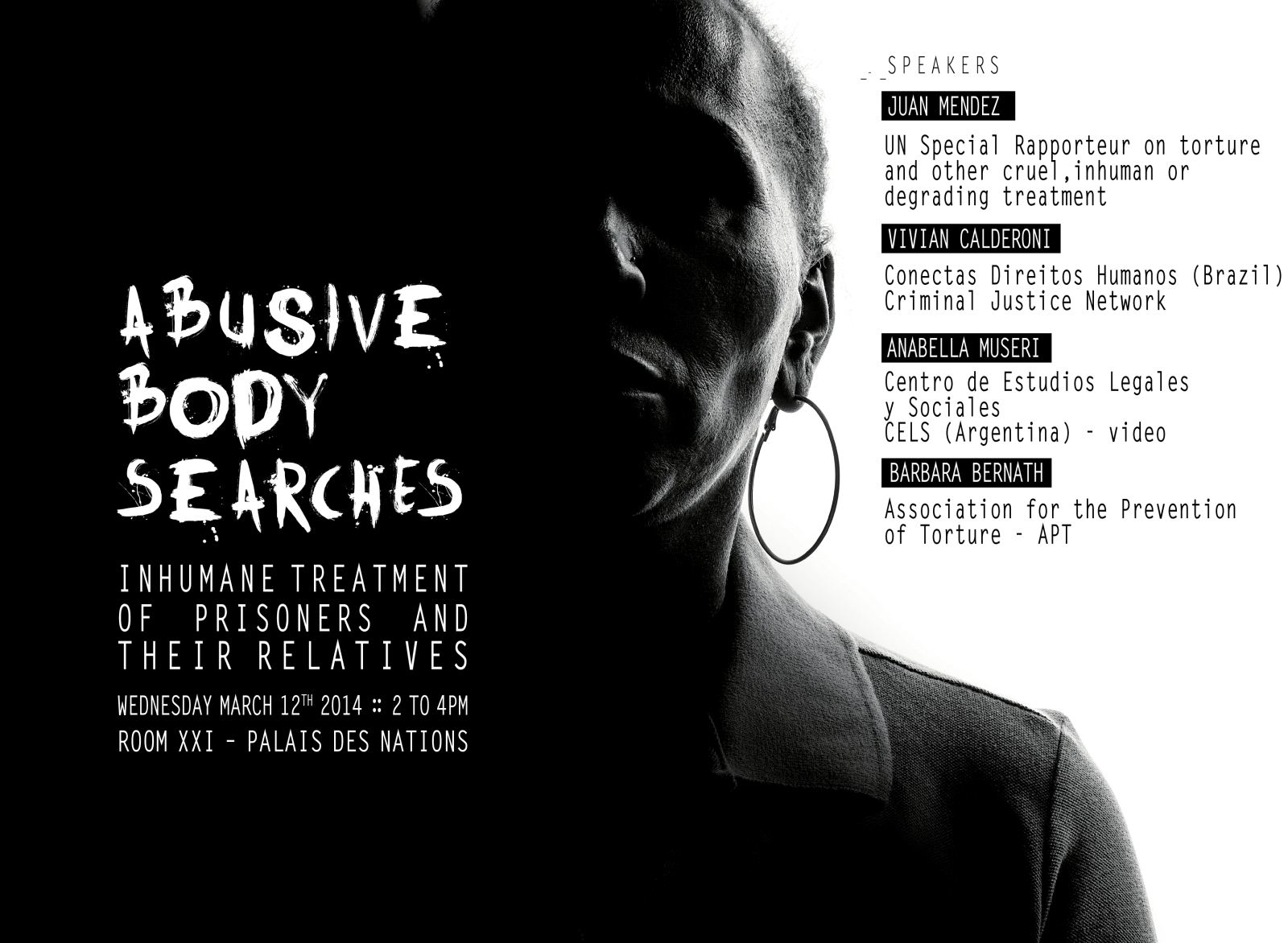 Relatives of detainees – including pregnant women, the elderly and infants – have to endure manual cavity searches of their genitals when they visit their relatives in the Brazilian prison system. The practice, which also includes stripping naked, being forced to squat and manual inspections, is known as an “oppressive search” and it will be described by Conectas tomorrow to member countries of the United Nations Human Rights Council, who are currently gathered for the council’s 25th regular session in Geneva, Switzerland. Conectas will also ask the UN to urge Brazil to put an immediate end to this practice.

“It’s difficult for a foreign audience to understand how it is possible for this to exist in Brazil and for it to be performed on a regular basis, without any shame, by agents of the State,” said Vivian Calderoni, a lawyer from the Justice Program at Conectas, who was one of the speakers at the side event organized by Conectas, the Criminal Justice Network, Cels (Center for Legal and Social Studies, of Argentina) and Humanas, of Chile.

“If we consider that every one of the nearly 500,000 prisoners in Brazil has a family with at least 3 members, we are talking about a degrading practice that victimizes around 1.5 million Brazilians. It is one of the most extensive, recurrent and institutionalized human rights violations that we know about,” added Calderoni.

The “oppressive search” is performed under the pretext of barring the entry of drugs, mobile phone chips and other banned items into prisons. However, research conducted by the Criminal Justice Network, of which Conectas is part, discovered that this excuse is groundless. Based on official documents supplied by the São Paulo State Prison Administration Department itself, it was found that only 0.03% of visitors were carrying contraband. There were no cases of attempts to smuggle in weapons. The research used data gathered by the government in the months of February, March and April in the years 2010, 2011, 2012 and 2013.

“It is clear that this abusive practice is used more as a form of punishment against the prisoners, extending the sentence to people who have never been convicted of any crime. This is not conducive to the reintegration of prisoners into society. In contrast, it fuels a sense of indignation, animosity and hatred,” said Calderoni.

The UN rapporteur on torture, Juán Mendez, drew attention to the fact that intimate searches constitute a “humiliating and degrading” practice, or even “torture, when conducted with the use of violence”. The rapporteur said that body searches must be conducted with respect and without humiliation, and only when there is no other alternative. Mendez recognized the difficulty of balancing the imperative of security with respect for people’s rights, but he was clear about the fact that no practice may violate human dignity.

Barbara Bernath, of the Geneva-based Association for the Prevention of Torture, made distinctions between legal searches and abusive searches. According to her, if a person is searched by someone of the opposite sex, this may constitute abuse or mistreatment. The same applies if more than two people are involved in the procedure, which increases the embarrassment and humiliation. She emphasized that intimacy must be respected and that searches must be performed in privacy. Read the statement issued by the Association for the Prevention of Torture on abusive searches. Finally, Bernath pointed out that women and children are especially victimized by this practice. This is even more serious, she said, when the woman being searched has a history of sexual abuse.

Anabella Museri, of Cels (Center for Legal and Social Studies, of Argentina), participated by video conference. In her presentation, she pointed out that, in addition to abusive body searches, prison guards also destroy clothes, food and medicines that visitors bring for their relatives. Museri revealed that many of the searches are conducted in the prisons during the night, with the use of violence. She also revealed that many inmates prefer that their relatives, especially their wives and daughters, do not visit them in prison, so they do not have to endure these abusive searches. This further increases the isolation of the prisoner.

Vivian Calderoni, a lawyer at Conectas, read the account of a Brazilian woman who was subjected to an oppressive search when visiting a family member in the prison system. She presented research conducted by the Criminal Justice Network to determine how much contraband is found on people visiting their relatives in prison. Based on official documents supplied by the São Paulo State Prison Administration Department, it was found that only 0.03% of visitors were carrying banned items. She explained that the number of items found on prisoners is four times higher than the number of items seized from visitors, which proves that the contraband gets in through other channels, and is not smuggled in by relatives on visitation days.

Conectas and the Criminal Justice Network have heard the accounts of people who have experienced the oppressive search, such as those containing the excerpts below:

“The [female] employee looks at me from head to toe with contempt and says: you know what you have to do. I go through the metal detector still clothed, without my bra, and into an inspection room with another 3 or 4 women, where we strip naked. Then the torture session begins: ‘squat down, push, it’s closed, puuush, cough, squat down again, open it with your hand, I can’t see’. What does she want to see? My uterus? What’s the reason for all this? Then the torture resumes: ‘against the wall, lie down, open your legs wider and push like you’re having a baby’. What’s that? I don’t have children, I don’t know what it’s like to push like that, but I do everything I’m told. But it’s not enough for the employees and so they call others to search me and the whole ordeal starts over again, but now I’m upset and I start to cry, so they turn on the psychology: ‘what are you crying about? Go on, put you hand down there and take the drugs out, because I know you’ve got some’. My response: I’m tired waiting here at the prison gates since yesterday, I just want to see my relatives, I don’t have any drugs inside me.”

“I’m treated like meat in a slaughterhouse, enduring insults and contempt from the guards. I have to squat down 3 times, as established by the rules of the prison, but this isn’t what happens, because depending on the guard, they make me squat 5 or 6 times, claiming they can’t see properly. This begs the question: to see what? I feel completely helpless in these situations, because even though I know my rights and the law, hierarchy prevails and inside the prisons it’s the guards that set the rules.”

“After completing the procedure, the employee took my ticket, asked me to get dressed and took me to the bathroom of the detention center, put me up against the wall and made me push for 20 minutes. I opened it up, applied toilet paper, coughed. In tears, I begged and told them that I had nothing at all. Even then, the interrogation didn’t end.

In addition to this side event, Conectas took the debate on oppressive searches to the floor of the Human Rights Council on Friday, March 14. In her oral statement, Vivian Calderoni said that “oppressive searches are an unacceptable practice that constitute inhumane and degrading treatment, and inflict physical and mental suffering”. “Nevertheless, they are performed regularly in Brazil, in violation of the principle of human dignity.” Calderoni ended her presentation by urging the United Nations to support the approval of Senate Bill No. 480/2013, which would ban these types of searches in the country.

The presentation of these cases of abusive searches occurred in the same week that Conectas denounced the more than 60 killings that have taken place in the Maranhão state prison of Pedrinhas, requesting that the UN rapporteur on Torture, the Argentine Juan Mendez, make a visit to Brazil.

Conectas – which has consultative status in the United Nations – combines these international complaints with firm domestic action. Lawyers from the organization have made regular visits to prisons – most recently, earlier this month, to the Women’s Prison of Butantã, in São Paulo, and before that to the Pedrinhas prison, in Maranhão – and submitted their findings to the proper authorities. In the case of Pedrinhas, Conectas, Justiça Global and the Maranhão Society of Human Rights obtained a precautionary measure forcing the government to take steps to put a stop to the human rights violations at the prison.

On Monday this week, Conectas, the Maranhão Society of Human Rights and Justiça Global made an oral statement in the UN Human Rights Council on the killings and other violations committed at the Pedrinhas prison, in Maranhão.

In addition to decapitations and more than 60 killings reported at the facility since the start of last year, Conectas also spoke about the flaws in the Brazilian prison system as a whole, drawing attention to the government’s inability to address the violations. Calderoni spoke about the killings and decapitations, adding that the situation remains critical at the facility. “The response of the government has been to militarize the prison,” she said.

In another oral statement, made on Friday, March 14, the representative of Conectas in Geneva, Paulo Lugon, emphasized the importance of the Review of the Standard Minimum Rules for the Treatment of Prisoners – a document prepared in 1956 to ensure respect for the dignity of prisoners and to guarantee them healthcare and the right to a defense.

The fourth meeting of the Group of Experts on the matter was scheduled to take place in Brasília in February, but was cancelled by Brazil with less than a week’s notice, during the height of the Pedrinhas prison crisis.

Lugon pointed out that many countries base their prison administration standards exclusively on the Minimum Rules and he called for a commitment from the Council members in the upcoming rounds of talks.