Myths and truths about the Immigration Law

Bill is ready to be approved by the Senate 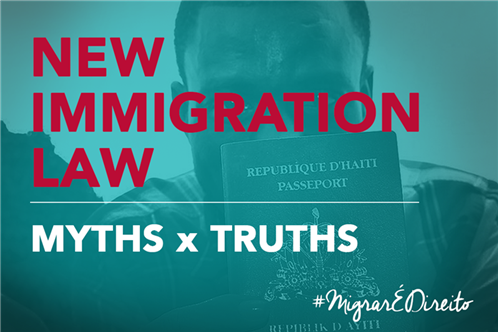 The Senate could, over the next few days, vote on the new Immigration Law that repeals the Foreigner Act created during the military dictatorship and establishes non-discrimination and anti-xenophobia as the principles of Brazilian immigration policy.

Click here to demand the immediate vote of the new Immigration Law in the Senate.

The text of the bill is the result of a nonpartisan effort and an intense engagement by civil society. It also recognizes the historic and contemporary contribution of immigrants to the economic and cultural development of Brazil.

Since the bill was approved in the Foreign Relations Committee on April 6, however, several myths have been propagated in an attempt to block the vote on the new legislation. Learn how to separate fact from fiction.

MYTH 1: As a result of the new law, the country will be flooded with foreigners.

TRUTH: There is no reason to believe that Brazil will become a priority destination for immigrants and refugees. According to data from the UN, there are currently more than 240 million people living outside their country of origin – two-thirds of them are in Europe and Asia. Human mobility in the world is definitely not the result of either strict or lenient immigration legislation, but instead other motives, such as wars and catastrophes, or the search for better living conditions and family reunification.

It is worth noting that, according to the Federal Police, Brazil had nearly 1.8 million immigrants in 2015 – less than 1% of the total population. Meanwhile, the Ministry of Foreign Relations estimates that there are three million Brazilians living abroad, far more than the number of people from other countries who come to Brazil. Given these figures, the use of the term “flooded” is inaccurate at best.

By offering more sensible regularization mechanisms, the new legislation will provide better ways for the immigrant population to register and access rights – which is just as positive for Brazil as it is for immigrants.

MYTH 2: The entry of immigrants will increase the crime rate.

TRUTH: There is no evidence that immigrants are more involved in crime than Brazilians. On the contrary: data from the Ministry of Justice from December 2014 demonstrate that the number of arrests of people of other nationalities has been falling in recent years and is still negligible when compared to the total number of law abiding immigrants in the country (just 0.2%, according to data from 2015 from the Federal Police). Immigration policy and public security policy each have their own specific characteristics and should be treated separately.

MYTH 3: The entry of more people will worsen the economic crisis because immigrants take the jobs of Brazilians and overburden public services and social programs.

TRUTH: Data from 2015 from the Federal Police and the IBGE statistics institute reveal that immigrants represent less than 1% of the total population of Brazil. The data also demonstrate that immigrant workers contribute significantly to economic development, and they pay direct and indirect consumption taxes just like any Brazilian.

Therefore, immigrants also fund public services such as healthcare and education – two human rights that are recognized in the Constitution and guaranteed to any person, regardless of their nationality.

On the matter of social security, it should not be forgotten that immigrants, just like Brazilians, are only entitled to a state pension and other social security benefits after the minimum contribution period established by law.

A quick look back at the history of Brazil reveals how much immigrants have added to our economy – and this is still the case today. What’s important is to guarantee that they are incorporated into the formal labor market in dignified conditions – and this is precisely what the new law does by simplifying the regularization process so immigrants can get the right documents and access the job market.

MYTH 4: The new law will leave the country’s borders wide open, including for drugs and guns.

TRUTH: The new Immigration Law is balanced and robust in guaranteeing rights for immigrants while at the same time safeguarding the country. Brazil’s sovereignty will not be affected. The text of the law is the result of a sovereign and democratic process: it was drafted over the course of four years with broad participation by a number of social actors and government bodies, including the Ministry of Justice and the Federal Police.

The matter of national security and border security was widely debated during this process and various oversight mechanisms were established. They remain the responsibility of the border police, as determined by the Constitution.

It is worth pointing out that trafficking in the border regions represents an entirely different dynamic to what motivates immigration and the two issues should, therefore, be addressed separately by the public authorities.

MYTH 5: The new law will make the country more vulnerable to terrorism.

TRUTH: The new Immigration Law modernizes the system for regularizing the status of immigrants who come to Brazil and encourages people to present themselves to the authorities to get documentation – something that a potential terrorist is unlikely to do.

Terrorism is a transnational and violent phenomenon that occurs outside the bounds of national legislation and international law. The choice of targets or sites for the preparation of acts of terrorism (like any other criminal act) does not require the proper registration of the perpetrators in a given country. These people do not need ways to regularize their status and be formally identified, since they use the underground (which is strengthened by outdated immigration rules) as a shield.

Moreover, it is erroneous and xenophobic to assume that immigrants pose a risk to national security. This assumption violates the constitutional principle of the presumption of innocence.

It is important to recall that Brazilian society was built by immigrants from all over the world and that our grandparents could have suffered the same type of discrimination. Furthermore, Brazil has tools such as the Criminal Code to deal with exceptional situations.

TRUTH: There is no provision in the new Immigration Law that gives the culture of immigrants precedence over Brazilian culture. The text of the bill reinforces all the constitutional guarantees of respect for equality, for diversity and for the essential values of human dignity (such as religious freedom and freedom of expression).

It is also worth bearing in mind that contact with other cultures can help overcome prejudices and enrich our own cultural diversity. Undoubtedly, we need to take in immigrants and enable their integration in Brazil, and the new law permits this by establishing specific public policies for this portion of the population.

MYTH 7: The new Immigration Law is a tool for political groups to increase their voter base.

TRUTH: Although the guarantee of full political rights, such as the right to vote, is indeed a campaign of the groups calling for equal treatment of immigrants and Brazilians, this point is not included in the bill under discussion in the Senate. Such a change could only be made with a Constitutional Amendment. Moreover, it is worth noting that the text of the bill was conceived after a broad multi-party effort.

It should also be pointed out that the new Immigration Law was drafted on a non-partisan basis, with the involvement of lawmakers from across the political spectrum. While the bill was sponsored by the PSDB (Social Democratic Party) in the Senate, for example, it was the responsibility of the PCdoB (Communist Party) in the Lower House of Congress.