Lowering the age of criminal responsibility :: why it doesn’t work 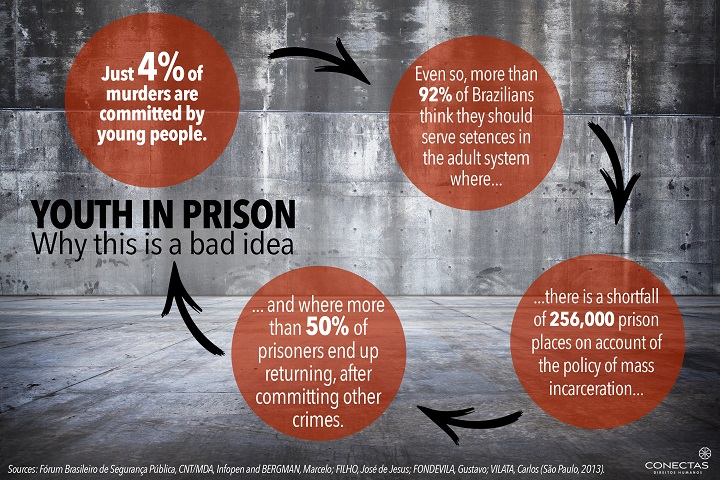 Proposals to lower the age of criminal responsibility are once again passing through Congress. After being re-introduced in February, Constitutional Amendment 171 was submitted to the Constitution and Justice Commission of the lower house, where voting was postponed on Tuesday, March 17, after members requested an adjournment.

The session approved the holding of a public hearing on the subject, which has been scheduled for March 24. The case, therefore, may be voted at any time from March 25 onwards. If approved in the Constitution and Justice Commission, it will proceed to a special commission and then to the floor of the lower house, where it will need to be approved in two rounds before being sent to the Senate.

Constitutional Amendment 171, originally from 1993 and drafted by Congressman Benedito Domingos, proposes to modify article 228 of the Federal Constitution so the age of criminal responsibility can be reduced from 18 to 16.

One of the arguments used to justify the proposed amendment is the need to combat crime waves perpetrated by adolescents who benefit from the impunity guaranteed them by the Child and Adolescent Act.

“There are numerous myths claiming that lowering the age of criminal responsibility is the solution to the problem of crime in the country. The facts, public data and experiences in other countries, however, show that this is an illusion,” said Vivian Calderoni, a lawyer at Conectas. “Urgent measures need to be adopted to solve this problem, but lowering the age of criminal responsibility is not one of them,” she added.

In addition to being an entrenched clause in the Constitution – meaning it cannot be altered – any reform of the age of criminal responsibility would go against a recommendation of the United Nations. The UN has said that such a move would pose a threat to the rights of children and adolescents and would also conflict with global trends in juvenile justice. This Tuesday, March 23, the United Nations Office on Drugs and Crime (UNODC) reiterated the importance of the UN Convention on the Rights of the Child and took a position against lowering the age of criminal responsibility.

The initiative has also led the Inter-American Commission on Human Rights (IACHR) of the OAS (Organization of American States) to publicly express its concern with the matter.

“Unlike what some people think, adolescent offenders are already punished in Brazil. And, moreover, the data leave no doubt that young people are far more often victims than perpetrators of violence in our country,” said Rafael Custódio, coordinator of Justice at Conectas. “Criminality is only reduced with heavy investments in prevention. One of the most important ways of combating juvenile crime is investment in education,” he explained.

To clarify why lowering the age of criminal responsibility does not work, Conectas presents evidence below to refute 5 common myths.

Myth: Detaining adolescents who have committed crimes in prisons instead of holding them in youth detention centers will reduce criminality

Detention is not the solution. Unlike what some people claim, Brazil imprisons too much and does so badly. Data from the Ministry of Justice reveal that the Brazilian prison system has the world’s fourth largest prison population – with 574,000 detainees, according to information from June 2013 – behind only the United States, Russia and China.

Between 1992 and 2013, Brazil increased its incarceration rate (number of people in prison per 100,000 inhabitants) by 317.9%. The pace has been such that nearly half of these prisoners have not yet been properly convicted – 43.8% are pre-trial detainees.

However, in spite of this, things are not safer in the country. On the contrary, the increase in the incarceration rate has been accompanied by a rise in crime rates. The murder rate, for example, rose 24% in 8 years, according to data from the Brazilian Public Security Forum.

Under the current Brazilian legislation, young offenders can be punished by detention just like adults. The Child and Adolescent Act permits up to three years confinement.

Currently, more than 20,000 young people are held in detention centers, according to the 8th Annual Report on Brazilian Public Security. Despite differences in relation to adult prisons, in practice the loss of rights and the discipline are similar.

Although they take courses and classes to help with their social reintegration, there are allegations of torture and mistreatment by agents of the State.

Moreover, the Child and Adolescent Act, just like the Criminal Code, provides for other types of punishment, such as probation, whereby young offenders remain under the constant supervision of a probation officer and are required to report to a judge periodically.

Myth: most of the crimes committed by adolescents are violent

Among the more than 20 thousand young people fulfilling educational measures in Brazil, almost 90% are not accused of having committed a crime against life, according to the 8th Brazilian Yearbook of Public Security.

According to the data, 4% of homicides in Brazil – a country with one of the highest rates in the world – were committed by children under 18 years admitted to the childcare system in 2012. The index drops to less than 1% when also considered other serious crimes (murder, robbery, theft and rape).

Myth: developed and developing countries set the age of criminal responsibility at less than 18

Of the 54 countries studied by Unicef (United Nation Children’s Fund), 78% set the age of criminal responsibility at 18 or older. These include France, Spain, Switzerland, Norway and Uruguay.

Myth: black and poor children and adolescents frequently lead a life of crime

In fact, children and adolescents in situations of social vulnerability are the main victims of crime and violence.  According to the 2014 Violence Map report, more than half (nearly 30,000) of the 56,000 people murdered in 2012 were young people aged between 15 and 29, of which 77% were black.

Furthermore, nearly 151,000 children and adolescents aged up to 17, victims of mistreatment and aggression, were heard by the “Disque 100” (Dial 100) abuse helpline between January and December 2014.