Law enforcement: the role of body cameras on uniforms

Cameras can reduce police lethality, but civil society control is essential to ensure their proper use 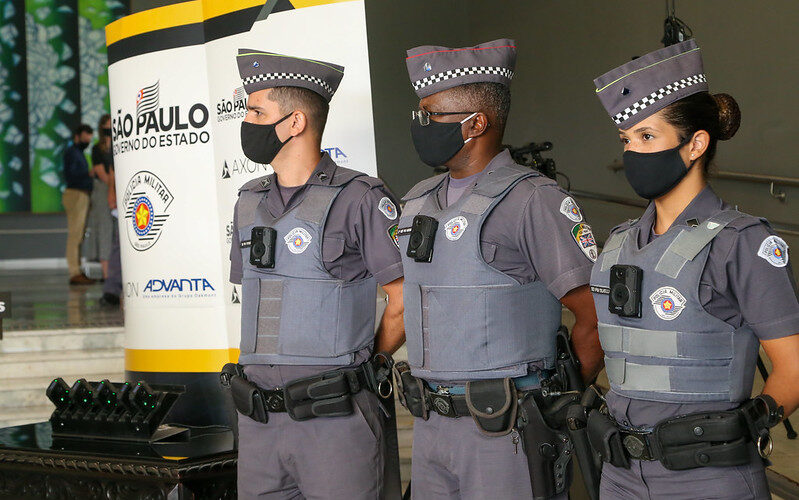 The use of body cameras worn on police uniforms is now a demand of sectors of society that work on tackling institutional violence in both Brazil and other countries. This is because, as some data show, the cameras can lead to a reduction of abuses committed by law enforcement officers during police contacts. Furthermore, the equipment can also prevent deaths of civilians and the law enforcement officers themselves.

In 2021, the Military Police killed 423 people in alleged confrontations in the state of São Paulo, according to data from the Military Police Internal Affairs Office. In the previous year, the figure was 659. One of the reasons for the drop of 36%, or 334 deaths in absolute numbers, was the use of approximately 3,000 body cameras by the police, according to an article in the Folha de S.Paulo newspaper. In the state of São Paulo, the first such initiative was set up in 2016.

Other states, such as Pernambuco, Bahia, Santa Catarina and Amapá, have also announced that they are either starting or planning pilot projects with police body cameras.

The coalition of social movements and organizations participating in the ADPF Case 635, known as the ADPF Favelas Case, asked the Supreme Court to require the government of Rio de Janeiro to put body cameras on police uniforms and vehicles, in particular for officers working in the favelas. Rio de Janeiro already has State Law 9,298/2021, which requires the government to purchase this equipment. However, Governor Cláudio Castro, who signed the bill into law in June last year, vetoed the part that established deadlines for these purchases.

According to the lawyer Gabriel Sampaio, coordinator of the program to Combat Institutional Violence at Conectas, the use of technology to reduce police abuse and lethality is welcome, and the measure has also contributed to reducing deaths among police officers.

“The use of cameras is one of the key measures to combat police violence. Data [also from the Military Police Internal Affairs Office] demonstrate their importance, namely the reduction of up to 85% in police lethality in São Paulo. The measure also led to the reduction of deaths among police officers, of 78%,” said Sampaio. “To continue the good results, however, it is important for the measure to be accompanied by a guarantee of transparency and effective social control, through the participation of civil society organizations, and external control, through the Public Prosecutor’s Office, with regard to the use of images.”

In an interview with the journalism website Ponte, the researcher Poliana Ferreira, author of the book “Justiça e letalidade policial” (Justice and police lethality), also defends the importance of social control on this issue. She says that while the technology can provide evidence in investigations, academia and social movements need access to these images in order to “produce ways of controlling police action”.