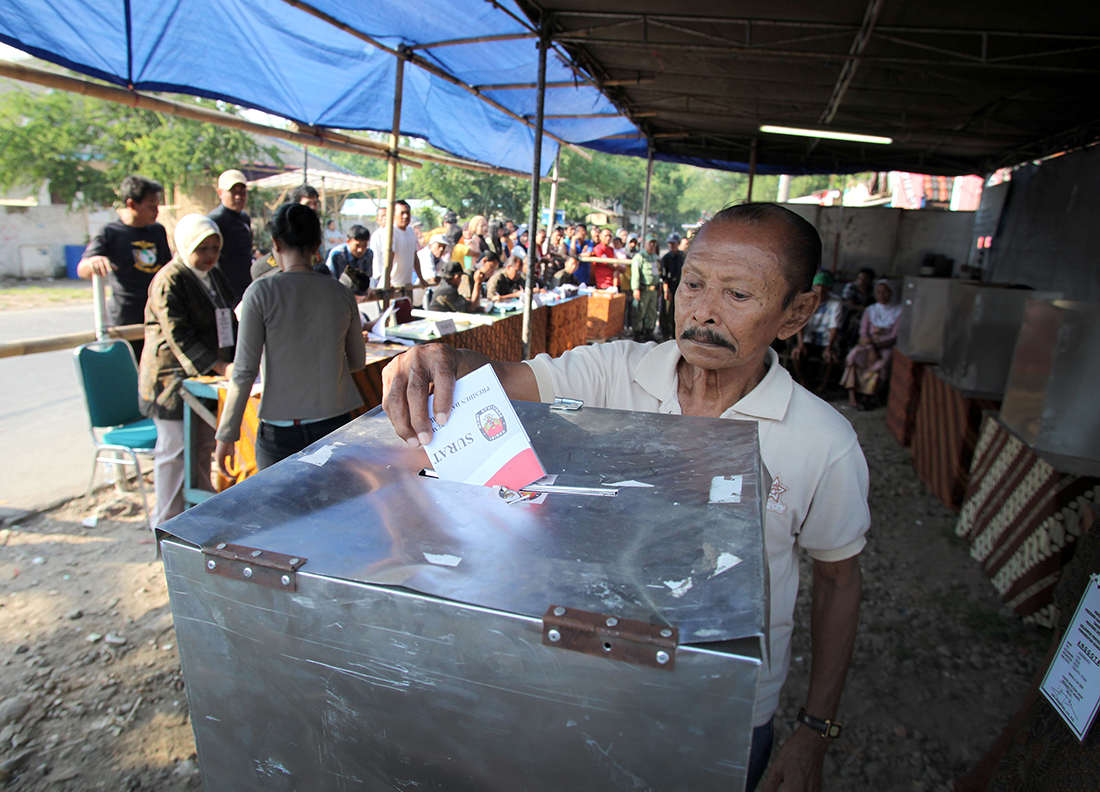 A man casts his vote for Indonesia’s next president at a polling booth in Cilincing, North Jakarta on July 8, 2009. Photo by Josh Estey. Contact photolibrary@ausaid.gov.au to request a high resolution original.

It is raining in the Indonesian capital of Jacarta. In front of the Merdeka Palace, the headquarters of the presidency, a group of human rights activists wearing black t-shirts and holding umbrellas, repeat a ritual that for seven years has exposed the difficulty of the world’s largest Muslim democracy in reconciling with its past of human rights violations. Standing in silence, every Thursday from 4 pm to 5 pm, they protest in solidarity with the victims of yesterday’s and today’s violations.

The group’s silent criticism conflicts with the image of strength and transformation that the country exports, particularly since the victory of Joko ‘Jokowi’ Widodo in July’s presidential elections. A former furniture salesman, the new president is the first to not have ties to the traditional political and military elite, and he faces the challenge of reconciling demands for change and economic growth with the need to form alliances with the powers of the past.

According to Haris Azhar, coordinator of the NGO KontraS (Commission for Disappearances and Victims of Violence), the end of the dictatorship brought about important advances in the human rights protection system, but only from a formal and institutional point of view. “Many victims of violations have tried to utilize human rights-related laws and institutions,” he explained in an article published in the latest issue of Sur Journal. “Unfortunately, the victims’ efforts have failed to drive the institutions to initiate legal processes for the protection of human rights.”

“The current government does not have the same grip on society as did the military regime, when so many human rights violations occurred and deprivation of rights was widespread,” reads the article.

“Now, instead, violations of rights occur less as directed by central government policy and more due to a generalized corrupt, abusive and violent mentality among both the public and high level or security officials, in what can be seen as derived from government’s weakness or unwillingness to uphold human rights.”

Over the past 8 years, according to the World Bank, Indonesia’s GDP (Gross Domestic Product) has posted annual growth of 6.6%. The percentage of the population living in poverty, meanwhile, dropped from 17% to 11.4% between 2006 and 2013. Unemployment has also fallen sharply, from 11.3% in 2005 to 6.6% in 2012. The figures paint the picture of a country with strategic importance in the group of emerging nations, and one that is dealing with internal contradictions.

“Abuse impunity and government weakness do not drive international attention. In fact, in the case of Indonesia, after 16 years of political transition, some international entities are looking at the Indonesian government as a key player to deal with other ‘worse’ situations, like Burma,” explained Azhar. “They seem to forget the millions of victims and the survivors who still lack compensation. In the case of Indonesia, it is very clear that the rights of people are still ignored and neglected, both internally and internationally,” he added, in his article.

Another criticism is the secondary role reserved for political matters in the country’s international priorities. In the strategic plan for the 2005-2025 period, the central government has opted to strengthen economic links and agreements, leaving aside the potential leading role the country could play as a mediator in human rights crises in places where experts identify it could have a positive influence, such as Syria, North Korea and the Palestinian territories.

“Even though it has to deal with a series of internal challenges, Indonesia, as a major Muslim democracy, is fully capable of serving as a powerful arbitrator in Asia and the Arab world,” said Laura Waisbich, adviser to the Foreign Policy program at Conectas. “Its internal contradictions cannot serve as an excuse for international inaction in the face of gross violations.”

The country’s monumental challenges have awakened Indonesian society to the need to build alternatives. The efforts have already produced some results. In addition to the recently-created Anti-Corruption Commission, civil organizations want to establish a kind of “human rights clean record” to keep violators out of public office. This is an important debate, since the new cabinet still has controversial figures, such as the new Minister of Defense, who is identified as being responsible for violations in the province of Aceh (known for applying Islamic law and being the focus of ethnic and religious tensions).

Organizations are also drawing attention to the need to expand dialogue with the different institutions and spheres of government.

They claim that without an effective social participation, it will be difficult to tackle issues such as guaranteeing religious freedom and defusing religious tensions in the country, combating discrimination of Indonesian migrant workers in the Arabian Peninsula and the Persian Gulf, providing shelter for refugees from the Middle East and West Africa, combating violations committed by companies, particularly in rural areas, and resolving the conflict in the province of West Papua.

“These and other priority issues for the local human rights movement, along with strategies to influence the country’s complex political landscape, were debated during the Seminar on Foreign Policy and Human Rights, organized by Conectas together with KontraS, when Issue 20 of the Sur Journal was also released in the local language, in the Indonesian city of Bandung.”

The public seminar, held at the Catholic University of Parahyangan on October 30, brought together Indonesian activists, academics and authorities to raise the visibility and the understanding of these challenges and to empower human rights organizations in dialogue with the public authorities.

Sur – International Journal on Human Rights is edited and published by Conectas in three languages and distributed in more than 100 countries.

The latest issue commemorates 10 years of the journal and contains 55 articles and interviews with analyses on the human rights movement in the so-called Global South.

All the content can be accessed on the journal’s website and in the printed version that will be released in December. All the 19 previous issues are available online.