In historic judgment, Supreme Court could define the course of indigenous land demarcation in Brazil

Scheduled for Wednesday, October 28, the case is considered one of the most important for native peoples since the Constitution of 1988 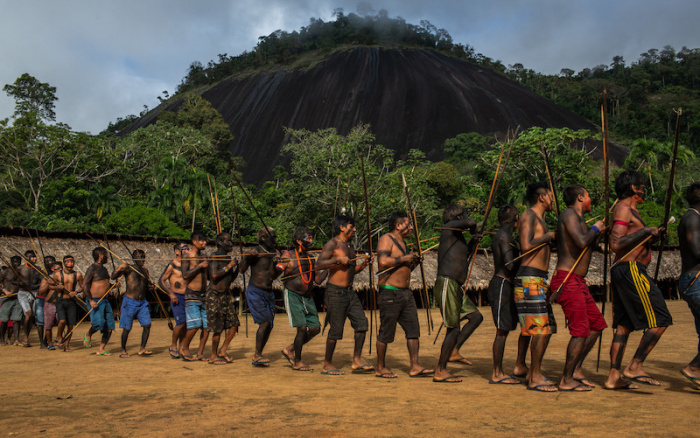 The Supreme Court is scheduled, on Wednesday, October 28, to begin its judgment of a case that will define the course of the demarcation of Indigenous Lands in Brazil.

The court’s justices will discuss whether to recognize or reject the most fundamental right of indigenous peoples: the right to land.

There are two issues under dispute: on the one hand, the so-called “indigenato” theory, which recognizes the land title of indigenous peoples as “original”, according to the terms of the Brazilian Constitution; on the other hand, a proposal exists to restrict the rights of these peoples to their lands by reinterpreting the Constitution based on the so-called “marco temporal” thesis. According to this interpretation, defended by the rural lobby, indigenous peoples would only be entitled to land demarcation if they had ownership of the land on October 5, 1988 – the date of the promulgation of the Constitution – or if on this date their ownership was under physical or legal dispute.

A land repossession case (Special Appeal 1,017,365) is pending in the Supreme Court, filed by the Santa Catarina State Environment Foundation (Farma) against the National Indian Foundation (Funai) and the indigenous peoples of the Xokleng tribe, involving the Ibirama-Laklanõ Indigenous Lands, an area claimed and already identified as part of their traditional territory, and also inhabited by Guarani and Kaingang populations.

The Appeal had a “general repercussion” recognized by the Supreme Court in 2019. This means that whatever is decided in this case will serve as a precedent for all cases involving the demarcation of indigenous lands at all levels of the Judiciary.

What is at stake?

As  a result of this, the Supreme Court will impact the future of hundreds of indigenous populations, since the application of the “marco temporal” thesis could further hinder land demarcations, which are essential to the survival of these peoples, to the pacification of historic territorial conflicts and to the curbing of violence resulting from intrusions and illegal activities, such as land grabbing, mining and logging.

The existence of isolated indigenous peoples will also come under even greater threat if the Court votes for the “marco temporal” thesis. This is because, due to their nomadic way of life and their aversity to contact with the outside world, it is impossible to prove the presence of these groups on October 5, 1988 on the lands they currently inhabit, or that they were formally claiming the recognition of their territories. To date, the Brazilian State has been unable to confirm exactly how many indigenous groups there are and where these especially vulnerable communities are located.

In the assessment of indigenists, lawyers, indigenous leaders and the Federal Prosecutor’s Office, the “marco temporal” is a perverse thesis, as it legalizes and legitimizes the violence to which indigenous peoples were subjected until the promulgation of the Constitution of 1988, especially during the military dictatorship.

“This position also ignores the fact that until 1988 indigenous peoples were under the protection of the State and did not have the autonomy to fight, legally, for their rights. This is why the slogan for the indigenous advocacy campaign to overturn the ‘marco temporal’ thesis is: Our history did not begin in 1988,” explained Rafael Modesto, a lawyer at the Indigenous Missionary Council (Cimi).

The judgment was scheduled by the president of the Supreme Court, Justice Luiz Fux, and will be conducted by teleconference, due to the novel coronavirus pandemic. The parties will have 15 minutes to speak and the amici curiae – friends of the court – will have a total of 30 minutes to make an oral statement.

What? Judgment of the special appeal with “general repercussion” of the Xokleng people

Where can I watch the judgment? TV Justiça television channel and networks of @apiboficial
Tweet-a-thon:  October 22 – from 11 am to midday
Questions and answers: https://bit.ly/2IUedyH
A video of lawyers commenting on the case: https://bit.ly/3mbeOu7