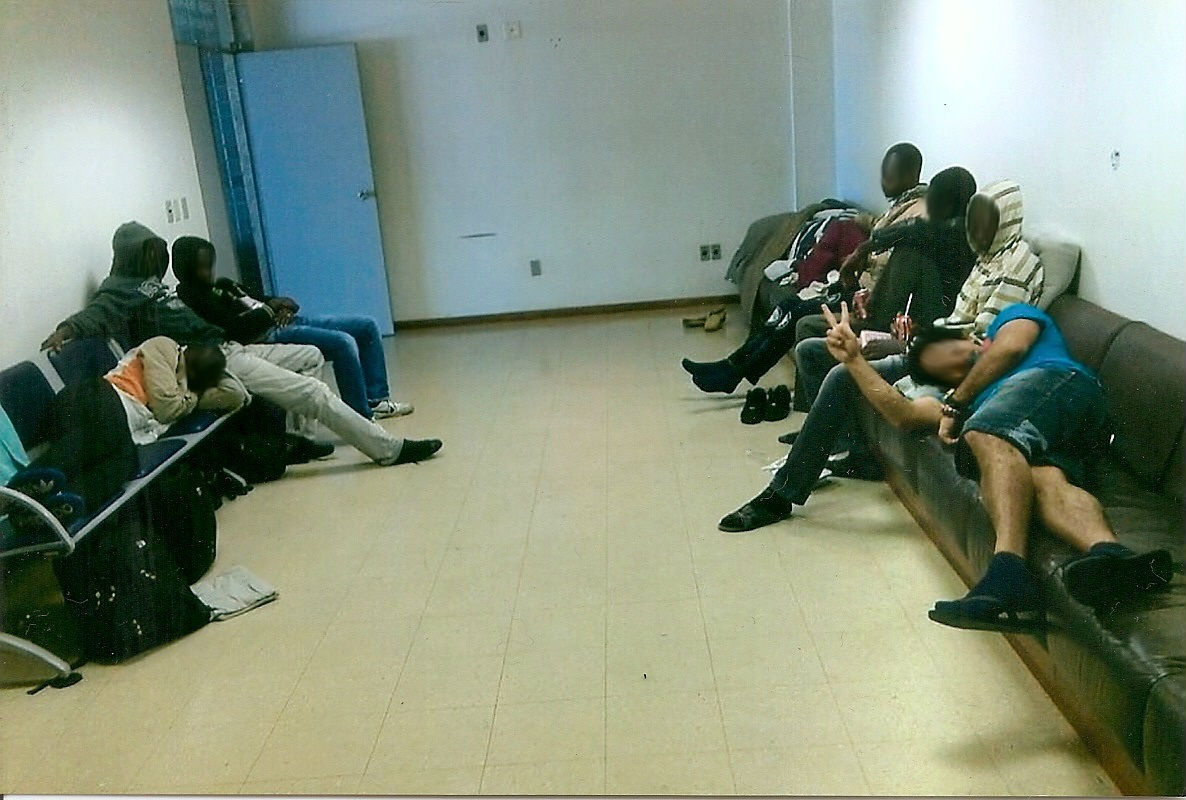 “We’ve been here for 48 days, sleeping on the floor, without having spoken to anyone. There’s no food, all I’ve had is water with sugar. Look at his lips, he’s getting sick,” M., a Somalian, told Conectas, pointing to the man next to him. Both were in a secure part of the international airport of Guarulhos known as the “Connector Space”.

Both M. and another 20 people were being held in the Connector Space in mid-November because their entry or transit through the country was questioned by the Federal Police. They are people who do not have the necessary documents to enter Brazil, raise some suspicion or simply cannot communicate well enough to explain their situation.

As a result, they are kept for days, weeks and sometimes months in an area that does not have the facilities to accommodate people for so long. The Connector Space is a relatively small room – smaller than a bus – located between the arrivals lounge and the immigration counter. There, people sleep badly, on the floor or on seats designed for passenger transport, wash their clothes in the bathrooms and lack appropriate conditions. Food is a problem, because it is the responsibility of the airline that brought the passenger and, since many refuse to say what flight they arrived on – for fear of being repatriated – they end up in a situation in which nobody is responsible for feeding them. There are reports of children and pregnant women being held in the room.

Some people claim to have applied for asylum upon their arrival in Brazil, without obtaining a response from the authorities. Brazil’s current law, however, allows any foreigner to request asylum once they arrive in the country, await the decision from the proper authority, in this case the CONARE (National Committee for Refugees) and receive documents such as a work permit.

“Brazil has become an increasingly more sought after destination for immigrants and unfortunately we have encountered cases of abuse and unpreparedness by the State in the treatment of these people. The situation in the Connector Space is unacceptable and it must not become the first step towards setting up a center for immigration detention, a practice widely criticized by international human rights agencies,” said Camila Asano, coordinator of Foreign Policy at Conectas.

In an attempt to resolve this situation, a meeting was held on November 19 with representatives of the Federal Prosecutor’s Office, the Federal Attorney General’s Office for Citizens’ Rights, the Federal Public Defender’s Office, the Federal Police, GRU (the company that administers the airport), UNHCR (the UN Refugee Agency), airline companies and the organizations Cáritas and Conectas. The meeting took place inside Guarulhos airport, following an inspection of the room where the immigrants are held.

“What we want is a quicker solution for the legal definition of the cases, as well as for other situations in which shelter and the protection of the dignity for these people is necessary, with a view to ensuring human rights and the legitimate security concerns of the Brazilian State,” said Aurélio Rios, Federal Attorney General for Citizens’ Rights, in a statement.

A number of alternatives were discussed at the meeting, including a possible Technical Agreement to provide the necessary services for the immigrants, including legal assistance, in order to speed up the resolution of their cases. Currently, contact with the immigrants falls under the responsibility of the Federal Police and the airport administration. Under the terms of the agreement, however, these services would be provided by the Guarulhos municipal government’s immigration office (which already operates inside the airport) in partnership with the Federal Police and the Federal Public Defender’s Office.

In a statement on December 4, the Federal Attorney General’s Office for Citizens’ Rights informed that Aurélio Rios had met with Paulo Abrão, Brazil’s National Justice Secretary, to discuss this agreement that is now close to being completed.

“Finally, we need to set the important condition that a detention center is not created with the alleged justification offering more humane conditions of hygiene and comfort, which has happened in other countries,” stressed Camila Asano.