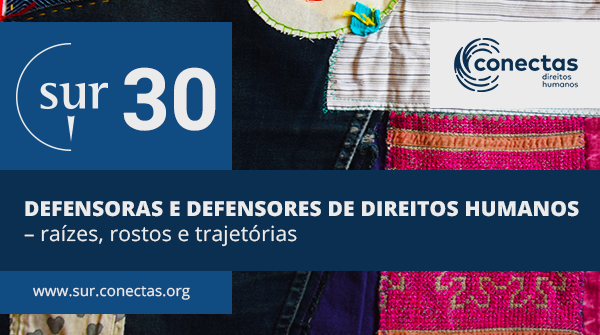 Issue number 30 of the Sur Magazine, an international publication edited by Conectas, launched on Monday 24 August, contains a series of articles on the theme “Human Rights Defenders – roots, faces and stories”.

The texts, that were produced during the novel coronavirus pandemic, were written by authors from 15 countries, like Brazil, Colombia, India, Syria and South Africa and reflect the challenges faced by those who work on defending rights given the escalation in violations seen worldwide.

The publication is available online, at no cost, in Portuguese, English and Spanish.

“Since the start, the objective of Sur 30 has been to present rights defenders from a different perspective – not the one focused on the number of deaths, risks and threats or the shrinking of democratic spaces that affects the daily lives of rights defenders everywhere.” Said Maryuri Grisales and Denise Dora, the Editors of this issue.

Among others, the texts cover the themes of the prolonged fight of indigenous people to defend their territories, structural racism and the high death rates among black youths in the periphery, LGBTQI+ rights, violence against women and the leadership of women in activism against repression.

The publication is divided into thematic axes that cover topics ranging from individual and institutional viewpoints concerning activities to defend rights, to new forms of activism, including the psychological, physical and spiritual self-care needed by everyone in order to continue working in a healthy manner.

“Being careful to avoid minimising realities of extreme inequality and violence and romanticising work generally carried out in situations where the lives of rights defenders are in danger, we sought to focus on their lives and the paths they have taken to celebrate their victories. We did so while also reflecting on an agenda that must urgently be pursued to ensure their well-being and protection.” She concluded.

The magazine also presents a picture gallery – a poetic depiction of the main issues of human rights, as well as personal experiences seen in a variety of artistic projects. The cover of this issue was made from a mosaic of photos that show the experiences of human rights defenders around the world.

Sur – International Human Rights Magazine, published by Conectas, seeks to influence the global human rights agenda by producing, promoting and publicising innovative research and ideas, mainly in the Global South, in the practice of human rights.

The publication is produced in Portuguese, English and Spanish, with open online access to a public of over 20,000 people in more than 100 countries. It is also distributed in a hard copy version to some of the top libraries, universities, international organisations and cultural organisations in the world.