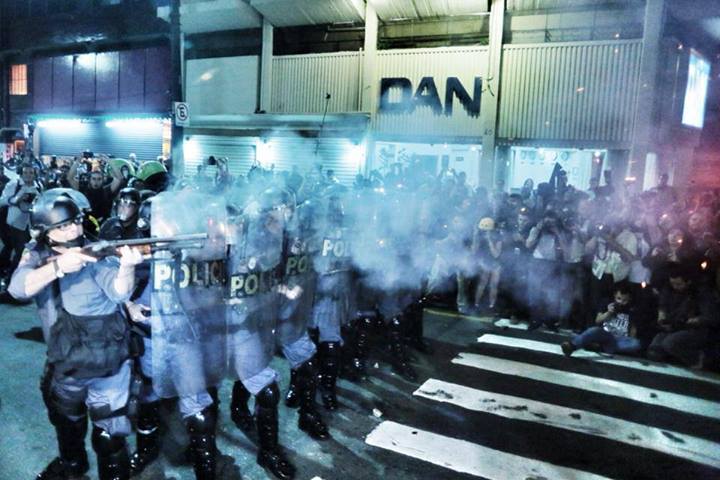 After months of silence by the Executive and the Legislative, the Judiciary was the first of the three branches to rebuke the actions of the Military Police at protests. An injunction issued on Friday (October 24) by Judge Valentino Aparecido de Andrade, of the 10th Public Finance Court, gave the Military Police 30 days to present a plan for police action at demonstrations or face daily fines of R$100,000.

Appeal Court Judge Ronaldo Andrade, however, suspended the injunction on November 5. Nevertheless, the final ruling will be given by the 3rd Public Law Chamber of the São Paulo State Court, were the state government’s appeal to suspend the injunction will be analyzed in more depth.

The injunction was a response to the civil public action filed by the São Paulo Public Defender’s Office and it determines that the Military Police may not use firearms or rubber bullets, that all officers have visible identification that includes name and rank, that clear conditions are established for issuing dispersal orders and that these orders are only given in extreme cases. The police must also disclose who gave the order for the dispersal and the reasons why. All these points must be included in the plan to be drafted by the Military Police.

“The decision reinforces that the Military Police is not prepared to deal with demonstrations and that the right to assembly is guaranteed by the Constitution,” said Juana Kweitel, program director at Conectas. “Today, police action at protests is marked by a profound lack of predictability and transparency and this needs to change,” she added.

Conectas is participating in the civil public action as an amicus curiae, which allows it to provide technical insights on the case. In July, the organization presented the judge with international standards on the use of force by the police, particularly in the context of public demonstrations.

August 5, 2013 – Conectas and the Citizenship and Human Rights Center of the São Paulo Public Defender’s Office submit to the São Paulo State Public Security Department (SSP) a series of recommendations on how the police should act in demonstrations. No response was ever given.

April 22, 2014 – The São Paulo Public Defender’s Office files a public civil action asking the courts to compel the State of São Paulo to adopt these recommendations. The case is pending in the 10th Public Finance Court.

July 17, 2014 – Conectas presents the courts with an overview of the main international standards that regulate police conduct and alleges that the state of São Paulo fails to comply with provisions of the Universal Declaration of Human Rights (of the UN) and the American Convention on Human Rights (of the OAS).