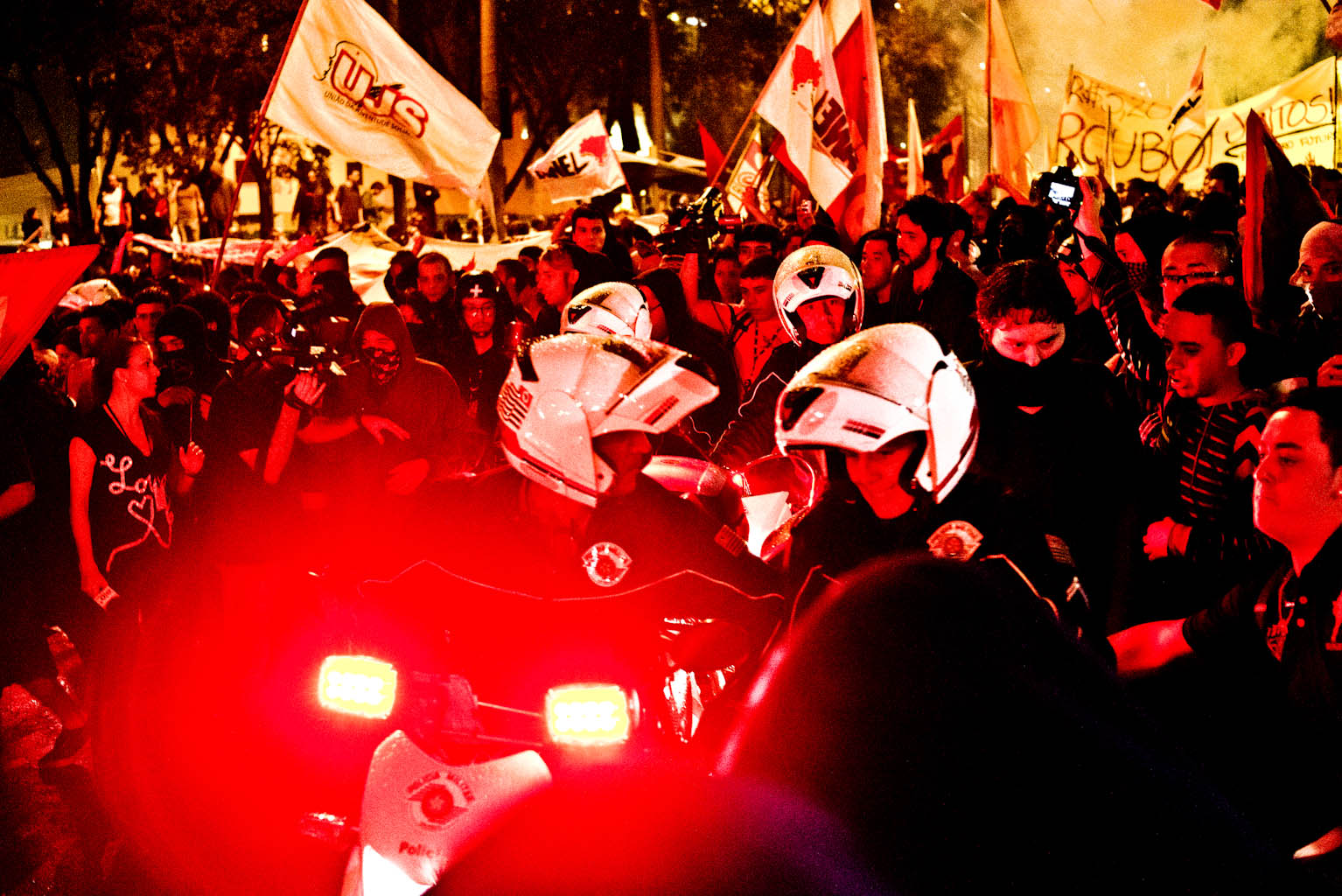 In the early hours of this morning, July 6, the São Paulo state legislature approved, in a special session, a bill that limits the right to protest. Bill No. 50/2014, led by state lawmaker Campos Machado, bans the use of masks at protests and requires prior notice to be given to both the Military Police and the Civil Police. The bill also makes it illegal to be in possession of objects that could be considered weapons by the police.

The move by the lawmakers occurred in the same week that six demonstrators, including two lawyers, were arrested during a peaceful protest in Roosevelt square.

The bill had been pending since February, but its passage was sped up yesterday after it was given fast-track status. In just a few hours, the legislation was approved by the house, which adjourns for recess today. The bill will now be signed into law by São Paulo governor, Geraldo Alckmin.

“This is another step towards the criminalization of grassroots movements in São Paulo. It is regrettable that this has occurred in a country with so many long-standing and legitimate protest movements,” said Rafael Custódio, coordinator of Justice at Conectas.

As far as Conectas is concerned, the bill is unconstitutional since it restricts the right to protest that is protected in article 5 of the Brazilian Constitution of 1988.

The use of masks is part of people’s right of personality and freedom of expression and does not prevent demonstrators from identifying themselves to the authorities. Moreover, activists and professionals are known to use masks and helmets to counter the effects of less-lethal weapons – so frequently used illegally and disproportionately by the police, as seen at the demonstrations on July 2, June 12 and May 15.

The provision against the use of masks also violates the principle of the presumption of innocence, since there is no way of knowing that demonstrators with their faces covered will commit a crime. The police forces, meanwhile, will now have more power to arrest activists, even though they have not committed any crime – which will encourage the illegal practice of arrest for verification that has already been widely condemned by human rights organizations and social movements.

The ban on carrying objects that could be considered weapons is also sensitive, since the bill is not clear and specific, paving the way for arbitrary action by the authorities.

The bill refers to “other [objects] that could harm people and damage public or private property”. It is important to point out that the bearing of arms is already regulated by federal legislation.

The requirement to give prior notice, although permitted by the Constitution, may be used as an excuse for the São Paulo police to restrict the exercise of the right to protest – as, indeed, we all witnessed recently in Roosevelt square.

Similar bills are also pending in the federal legislature and in other states. In May, Conectas and partners submitted a technical opinion to members of the federal Congress criticizing Bill 508/2013, which increases penalties for crimes committed at protests when offenders are wearing masks.

“We are witnessing a coordinated effort by the different levels of government, and often between the three branches – executive, legislative and judicial – to criminalize the protests. This is an unacceptable setback in a country that has struggled so hard for fundamental freedoms,” said Custódio.