For an end to torture in São Paulo 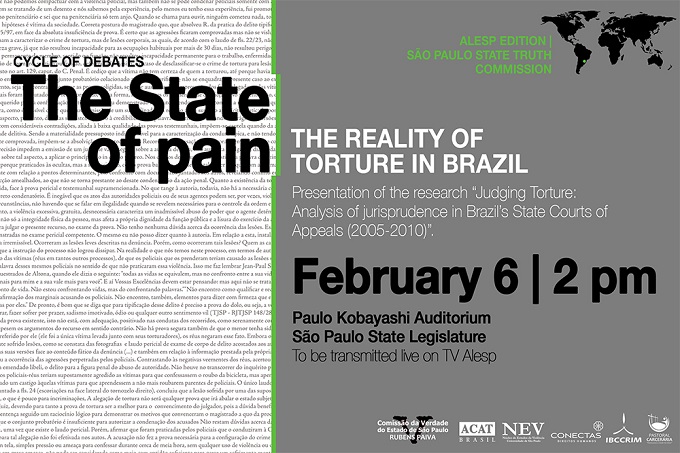 The creation of a state-level mechanism to combat and prevent torture will be discussed this Friday, February 6, at 2 pm, in a debate at Alesp (São Paulo State Legislature).

The event is part of the international cycle of debates “The State of pain: the reality of torture in Brazil”, organized in the wake of the release of a new study that analyzes appeals court rulings of torture cases between 2005 and 2010 in Brazil.

Alesp is scheduled to vote on a bill to create the State-Level Mechanism to Combat and Prevent Torture by March. The mechanism is an independent body with free access to detention facilities and the power to request investigations, conduct medical examinations, prepare reports, catalogue data and recommend public policies.

“This study came out at the right time, since we are currently discussing the role of the state of São Paulo in the combat and prevention of this crime,” said state legislator Adriano Diogo, the author of the bill.

Also participating on the panel, besides the legislator, are Maria Amélia Teles, of the State Truth Commission; José de Jesus Filho, of the Catholic Church’s Pastoral Carcerária prison care service; Nathercia Magnani, a researcher in the study; and Sheila de Carvalho, a lawyer at Conectas.

The creation of state-level mechanisms was one of the suggestions made by Conectas to the National Truth Commission (NTC), which included this among its recommendations.

Brazil already has a National System to Combat and Prevent Torture, created by Law 12,847 that was passed by the federal government in August 2013. The mechanism, however, which will visit detention facilities across the country, is still not up and running.