Conversation Circle with the winners of the 40th Vladimir Herzog Award

Discussion with journalists to take place on Thursday 25 at 2pm, in Tucarena, in São Paulo. Awards Ceremony at 8pm. 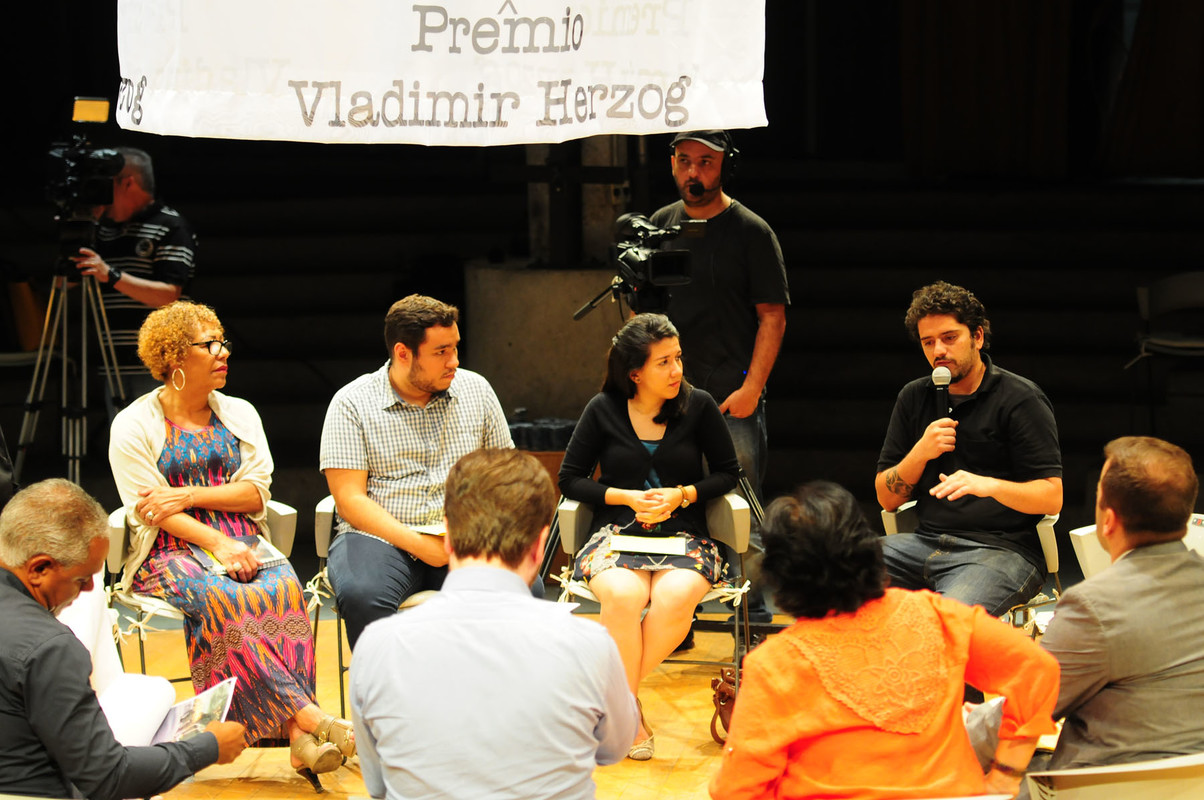 Conversation Circle prior to the awards ceremony of the 37th edition of the Vladimir Herzog Award, held in Tucarena, São Paulo, on 20/10/2015. The winning journalists talked about the details of the process of producing their material up to publication.

The winners of the 40th Vladimir Herzog Journalism Award for Amnesty and Human Rights will meet in São Paulo next Thursday (25 October 2018). The 7th Conversation Circle will take place from 2pm to 6pm, in Tucarena (Rua Monte Alegre, 1024 – Perdizes) with live transmission. The link for the transmission will be notified on Abraji’s social networks in the next few days.

The event is especially for students on Communications courses and aims to provide a space to share methods and reporting techniques and will cover preparation of the assignment, checking, sources and interviews.

Coordination is by the Journalist Sergio Gomes, Director at OBORÉ, Coordinator of the Repórter do Futuro Project and Advisor to the Vladimir Herzog Institute. Production is by Aldo Quiroga, Professor and Journalist at TV Cultura, in São Paulo. Mediation, as in recent years, will be by Professors and Journalists Angelina Nunes and Paulo Oliveira. Also on the organisational committee for the event are the Journalists Lucas Estanislau, Marcelo Soares and Giuliano Galli.

During the Conversation Circle the winning teams of the Fernando Pacheco Jordão Young Journalist Award will receive their diplomas. This Award is for Journalism students from all over Brazil and this is the 10th edition. The theme this year was: “2018: 70th Anniversary of the Universal Declaration of Human Rights. The Sexual Exploitation of Children and Adolescents in Brazil”. Dozens of teams sent in their assignment proposals and the three best were selected to produce their reports under the guidance of a lecturer at their teaching institution and a mentor journalist, recommended by the Vladimir Herzog Institute. The reports produced will be presented on 26 October.

The Conversation Circle is an initiative of the organisations on the Organisational Committee of the Vladimir Herzog Award: ABRAJI (Brazilian Association of Investigative Journalism); UNIC Rio (United Nations Information Centre in Brazil); Justice and Peace Commission of the Archdiocese of São Paulo; Periferia em Movimento collective; Conectas Human Rights, Federal Council of the Brazilian Bar Association (OAB Nacional), ECA/USP (School of Communication and Art at the University of São Paulo); FENAJ (National Federation of Journalists); Vladimir Herzog Institute, São Paulo State Police Ombudsman’s Office São Paulo Chapter of the Brazilian Bar Association; Union of Professional Journalists of the State of São Paulo and Intercom (Brazilian Association of Interdisciplinary Studies on Communication); In addition, the event will be supported by TV PUC and the Teaching Federation of the State of São Paulo (FEPESP).