The Brazilian delegation of 19 civil society organizations was received by the U.S. State Department and Congress 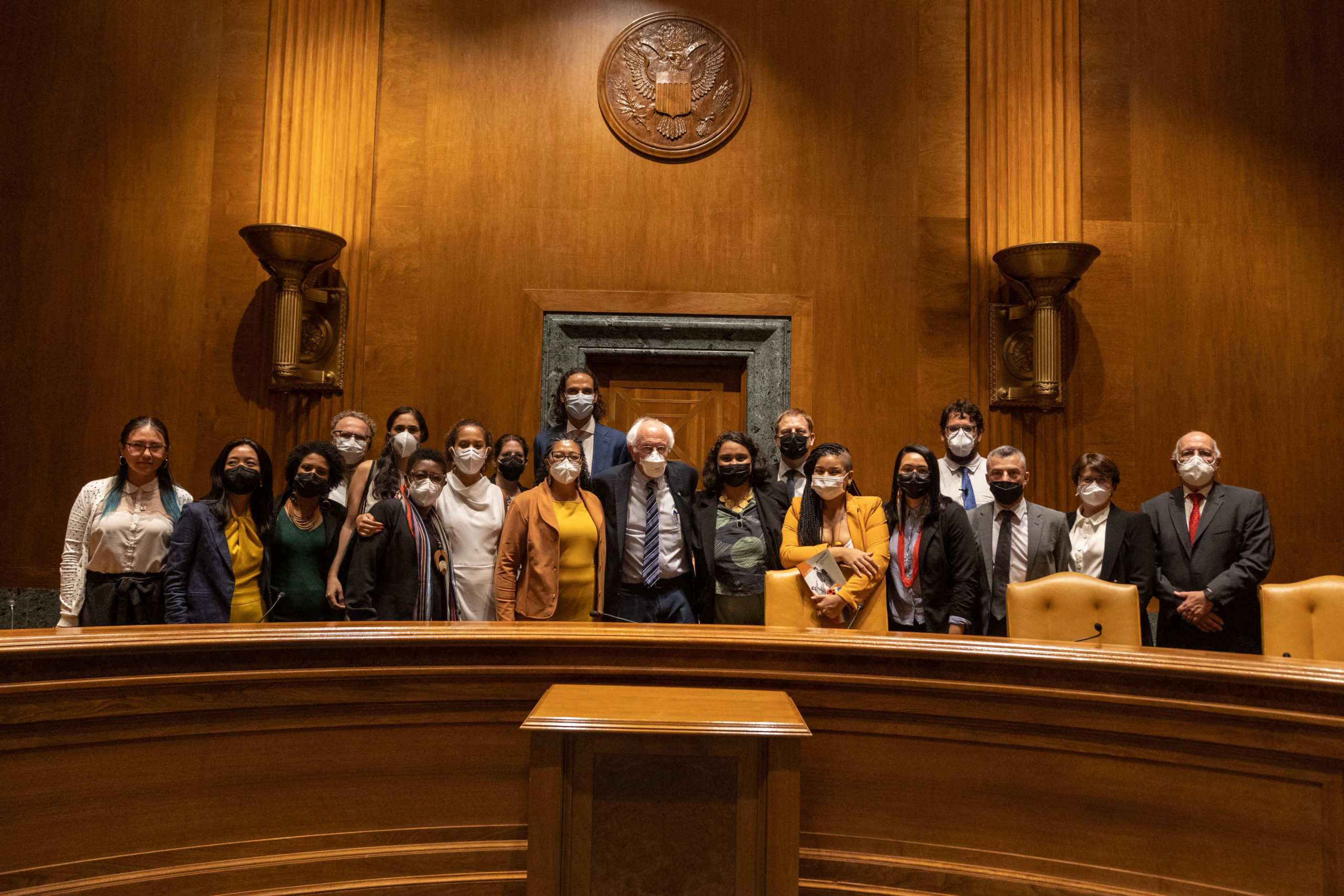 United States House Representatives and Senators, who in the American system of government formally play an important role in defining their country’s foreign policy and its relations with Brazil, reaffirmed their interest in the integrity of the election process and in respecting the outcome of the Brazilian presidential election in October, irrespective of who wins.

The unanimous positive response of the American authorities – expressed publicly, as in the case of Senator Bernie Sanders and Representative Jamie Raskin, and guardedly, in other cases – was that the democratic stability of Brazil is a matter of international importance and will be treated as such.

The statements heard by the Brazilian delegation are in addition to previous comments from US government officials, the most recent example being the Secretary of Defense, Lloyd J. Austin III, who, on Tuesday, July 26, at the Conference of Defense Ministers in the Americas, in Brasília, had already defended the “firm civilian control of the military” and the “adequate role of the Army in democratic society”, in contrast with the insistence of Bolsonaro in involving the Brazilian Armed Forces in his baseless accusations against the electoral system.

Before this, on July 18, the U.S. Embassy in Brasília had already released a statement in which it asserted that elections in Brazil are a “model” for the world. The statement came one day after Bolsonaro had met with members of the foreign diplomatic corps in Brasilia to present unfounded criticism of the country’s electronic voting machines and election authorities.

In Washington, the Brazilian organizations were received by authorities who offered similar messages and were asked in return to stick to their position and to consider paying extra attention in case the attacks on the electoral system continue or worsen as the date of the election in Brazil approaches.

This action by the Brazilian delegation in the United States is part of a broader effort being made in various parts of the world to expose the attacks on democracy in Brazil and the actions of local organizations, the press and the Judiciary to contain these undemocratic acts.

The presence of international election observers in Brazil in October is one example of this containment of unfounded attacks. The dialogue with leading actors in American politics is another example that takes into account the influential role that the U.S. has around the world and particularly in relation to Brazil. Moreover, the U.S. authorities were especially sensitive to the topic, given the recent memory of the attacks on democracy perpetrated by the now former President Donald Trump, when he called into question the country’s electoral system and attempted to prevent the certification of the victory of President Joe Biden in 2020/2021, by instigating the violent invasion of the Capitol Building.

“What I heard [from the delegation] unfortunately sounds all too familiar to me after the efforts by [Donald] Trump and his friends to undermine American democracy. I’m not surprised that Bolsonaro is trying to do the same in Brazil. We very much hope that the result of the [Brazilian] elections will be recognized and respected, and that democracy will indeed prevail in Brazil,” Bernie Sanders, a Democratic senator for the state of Vermont, told the delegation at the Capitol.

Between July 24 and 29, the Brazilian delegation was received by the U.S. State Department in a private meeting that lasted more than one hour; by aides to the representatives serving on the House Committee on Foreign Affairs, in the Capitol; by the representatives Jamie Raskin (Maryland, member of the select committee investigating Jan 6), Hank Johnson (Georgia), Mark Takano (California) and Sheila Cherfilus McCormick (Florida), by aides to senators Patrick Leahy (Vermont, president of the Senate) and Ben Cardin (Maryland); and personally by Senator Bernie Sanders, as well as by ambassadors from member states of the OAS (Organization of American States), by the IACHR (Inter-American Commission on Human Rights) and by local civil society organizations.

Many of the meetings were private, off-the-record, at the request of the hosts, such as the meetings at the U.S. State Department and with ambassadors from OAS member states. Others, however, were more open and spontaneous, such as with Senator Sanders, Representative Jamie Raskin and the Democratic Representative for the State of Pennsylvania, Susan Wild, who said: “This delegation reflects the common struggles taking place in Brazil today: struggles for environmental, economic, social and racial justice fought by activists under constant attack from Jair Bolsonaro. Given the Amazon’s unique role in our global ecosystem, what happens in Brazil will have a disproportionate impact worldwide. Representatives committed to protecting the environment and advancing human rights – especially those who come from neighborhoods like mine, which have a rich history of labor organization – have a responsibility to show solidarity with Brazilian labor movements and other social movements fighting to preserve the country’s democracy and ensure a future of rights, dignity and respect for all.”

Raskin, a representative who has a prominent role on the select committee investigating the attack on the U.S. Capitol on January 6, 2021, said after meeting with the group: “I advised the delegation to keep on talking about what is happening and to continue educating people about what is happening in the world, with the intention of creating as broad as possible a coalition to defend democratic institutions in Brazil. For me, this meeting was very educational and made it clear that the democratic forces in Brazil fear that something similar to what happened on January 6, 2021 in the U.S. will be repeated in their own country. That is why they are in contact with political parties, movements and citizens from around the world to join them in defense of constitutional democracy and elections.”

Dialogue with the IACHR and civil society

In addition to meetings with the State Department, the IACHR-OAS and lawmakers, the delegation was also received by 15 U.S. based academic and civil society organizations, such as the largest U.S. union, the AFL -CIO (American Federation of Labor – Congress of Industrial Organizations).

Cathy Feingold, director of the AFL-CIO’s International Department, said: “It is very important for us to meet with civil society organizations to make sure that we stand together, shoulder to shoulder, to fight for our democracies – democracy in our workplaces and democracy in our countries, which are interconnected. I am proud of our alliance with the Brazilian union movement and with civil society organizations because we know that these movements are on the front lines, building democracy and protecting democracy in Brazil, in the U.S. and around the world,” she said.

The meeting at the IACHR was confidential. Shortly after the meeting, the Commission published a press release urging Brazil to “prevent violence by providing protection and security measures during the election process, and to ensure adequate investigation of all acts of violence”. The press release cites events that were reported to the IACHR by the Brazilian delegation, such as the murder of Marcelo Aloízio de Arruda, a member of the opposition Workers Party (PT), by the pro-Bolsonaro activist José da Rocha Garanho, in Foz do Iguaçu, on July 9, as well as attacks by drones and home-made bombs at PT political rallies.

The document goes on to state that “although the Inter-American Commission notes the solid nature of democratic institutions and the rule of law in Brazil, it calls on the country’s high authorities and on all Brazilian political leaders to refrain from making comments that might foster intolerance, discrimination, deliberate misinformation, or hatred”.

The trip by the Brazilian delegation was organized by WBO (Washington Brazil Office) in partnership with WOLA (Washington Office on Latin America), the Atlantic Council, CEPR (Center for Economic and Policy Research), Amazon Watch and Action for Democracy.

The WBO is an independent and non-partisan think tank committed to promoting cooperation and knowledge about the reality in Brazil and to supporting the international work of civil society, social movements and other sectors of Brazil in Washington in defense of democracy, human rights, the environment and freedom.

Final declaration of the delegation

“We, from the delegation of representatives of 19 Brazilian civil society organizations who were in Washington between July 24 and 29, 2022, to discuss in the United States the attacks on democracy in Brazil, consider that the trip achieved the goal of informing some of the most prominent and influential actors in American politics about the delicate time that Brazilian democracy is facing.

In over 20 meetings held over these five days, we were received with deference and listened to with genuine attention by all the relevant actors we wanted to meet. We could see that today in the United States – and almost certainly in other parts of the world too – special attention is being paid to the political moment that Brazil is facing.

We were able to understand that the course of a country of continental proportions with a population of more than 212 million inhabitants, an environmental and cultural heritage of global importance, and which occupies a prominent place on the world economic stage, is a matter with implications that extend beyond our borders. The Brazilian election is undoubtedly, and above all else, a Brazilian matter – and this message was reinforced by the delegation and corroborated by the U.S. authorities in Washington; but the solidity of Brazilian democracy, respect for human rights and individual freedoms, the rule of law and the environment, indigenous peoples and the black population are issues of concern to the very idea of humanity and, as such, attract legitimate attention and concern in a world of interconnected and interdependent relationships. Informing these authorities about the reality in Brazil was, therefore, one of the priorities of the delegation.

From the Capitol Building to the State Department, from the IACHR (Inter-American Commission on Human Rights) to the television studios in Washington, passing through the offices of local social organizations and trade unions, the delegation was always greeted by an interested reception and a supportive countenance with regard to the times that Brazil is facing. At all these meetings, the delegation exhaustively repeated two messages: inform yourself about the ongoing attacks against the Brazilian electoral system and quickly recognize the outcome of the ballot boxes in October – irrespective of who wins – to reinforce the voice of the international community and, as a result, make it impossible to stage the coup that has been threatened publicly in recent years.

At all times, we encountered an attentive and concerned audience. On several occasions, we immediately received public expressions of support for Brazilian democracy, such as the statements by Senator Bernie Sanders and Representative Jamie Raskin, whose words had major public repercussions in Brazil.

We returned to Brazil with the certainty that our efforts helped to better inform the international community – in this specific case, the U.S., whose government, through several of its bodies, has already publicly taken a position in defense of democracy in Brazil – and we believe that this diverse and united Brazilian delegation played a fundamental role in the challenge of preserving, protecting and improving Brazilian democracy.”

Organizations that make up the delegation: