Committee launches new edition of the Lives of Struggle report 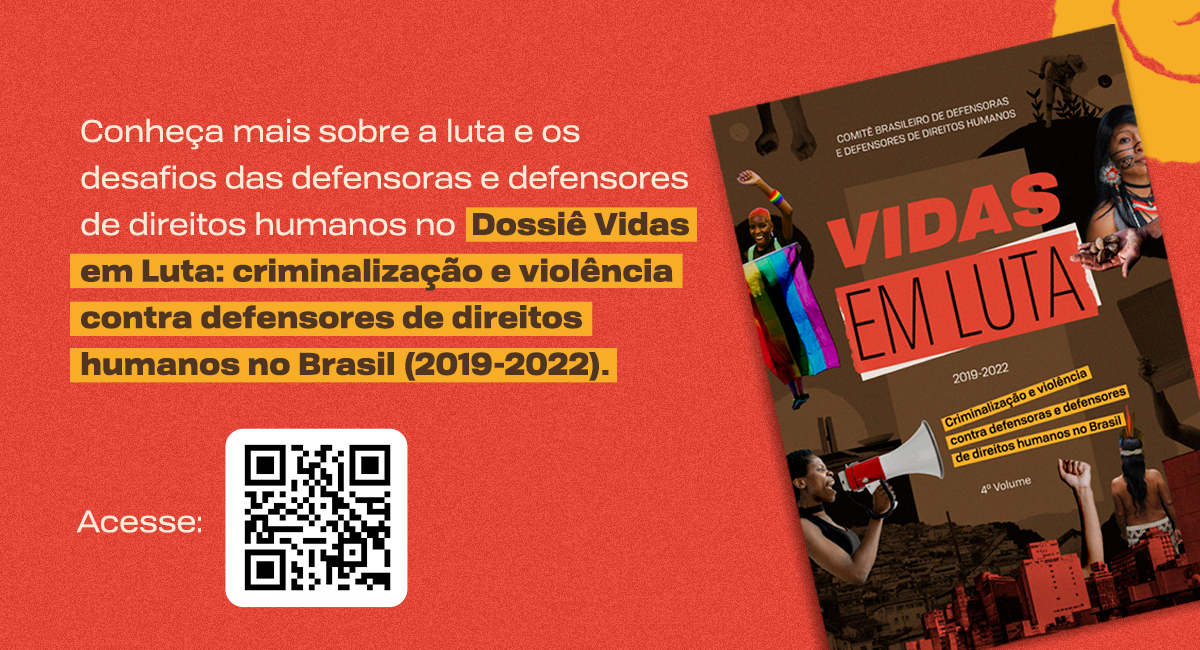 Individuals, communities and groups that defend human rights in Brazil and work to stop rights violations are not adequately protected by the Brazilian State. This is one of the complaints contained in the report of the Brazilian Committee of Human Rights Defenders (CBDDH). The launch of the 4th edition of the report “Lives of Struggle: Criminalization and violence against human rights defenders in Brazil” will take place at 5:00 pm on Monday, December 12, on the YouTube channel of the Committee, which is formed by a network of 45 organizations.

The report was launched during the week of International Human Rights Defenders Day, on December 9, and analyzes the last four years under the government of President Jair Messias Bolsonaro. The disruption and insecurity of the National Program for the Protection of Human Rights Defenders (PPDDH), Brazil’s main public policy for the protection of rights defenders, is denounced in the report as having a major impact on the protection of these defenders in the country.

Driven by popular demand, the PPDDH was created in 2004 and became effective after the murder of the missionary Dorothy Stang in 2005. Currently, it suffers from disruptions in its work and it has barely seen any expansion, according to the study.

In the report, which is now available for download, the Committee exposes the situation and the context of human rights violations against human rights defenders in the country between 2019 and 2022, unraveling the direct and indirect consequences of the Bolsonaro government on the protection of rights defenders and on the PPDDH itself.

Based on the study of eight cases monitored by the organization, the Committee shows how the austerity policy of the Bolsonaro government and the weakening of public participation councils undermined the whole system of protection policies for human rights defenders, raising their vulnerability all over the country.

The data reveal how the Bolsonaro government’s policy on gun ownership and the spread of hate speech legitimized and encouraged violence against defenders in Brazil, both in the countryside and in cities, victimizing indigenous populations, quilombola communities, LGBTQIA+ people, black lawmakers and other political figures who work in the defense of human rights.

“The study shows the physical bodies, faces, voices, skin and emotions of the political figures who, even facing violations and at imminent risk of death, fight for human rights in Brazil. We believe that, beyond the numbers, the voices and stories presented in this 4th edition of the report demonstrate the survival and the tireless work of rights defenders for Brazilian society,” said Sandra Carvalho, coordinator of the organization Justiça Global, which is a member of the CBDDH.

Since 2016, the Committee has had a policy to use an Emergency Fund to support defenders at risk. In the period from 2019 to 2022, 59 human rights defenders received support from the Emergency Fund, in 52 cases registered in 15 states.

Of these 59 defenders, 29 were in rural areas, 20 were in cities and 3 were in both contexts. Moreover, emergency support was granted 7 times for cases of direct conflicts with large-scale military, mining, petroleum and hydroelectric projects – with the State itself as the direct or indirect violator.

“We enable the purchase of cameras, the construction of walls at the homes of rights defenders and the offices of the organizations, as well as funds for transportation and hiring legal advice. The 4th edition of the Lives of Struggle report presents data that not only explains the worsening situation for human rights defenders, but that also shows how protecting defenders directly involves tackling the causes of the violence,” explained Luciana Pivato, coordinator of the National Rights and Policies Program of the organization Terra de Direitos, another member of the CBDDH.

The main types of violence suffered by rights defenders that motivated the request for financial support from the CBDDH were: threats to cause physical harm and against land; attempted homicide; home/office invasion; domestic violence; murders; intimidation; as well as a lack of access to basic rights such as food, water and healthcare – in many cases made worse by the pandemic. The data reveal the vulnerability of rights defenders and their communities due to the economic austerity policies of the Bolsonaro government.

The live event to launch the report will be attended by rights defenders who supported the Committee in its work on the new edition. Also present will be the lawmaker Benny Briolly, city councilor from the municipal legislature of Niterói; the indigenous lawyer Fernanda Kaingang, of the Kaingang tribe; Layza Santos, a grassroots lawyer from the legal organization Coletivo Margarida Alves; and Maurício Correia, of the Association of Lawyers of Rural Workers (AATR).

Watch the launch of “Lives of Struggle” live on Youtube.